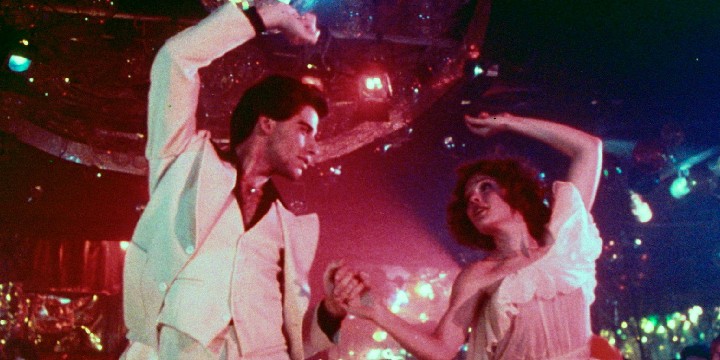 These Saturday Night Fever quotes will no doubt fuel your drive and desire to push forward with all your dreams and aspirations!

We’ve all heard the saying, “You only live once.” It is a quote meant to suggest that we should not be afraid of trying new things or doing something for the first time.

It zooms in on a young man named Tony Manero, who tries to escape his mundane life as a Brooklyn paint store employee. He wants to let go of his old life to pursue his dream of dancing in Manhattan nightclubs.

Tony Manero believes that we only have one chance to live life, which is why he did everything he could to achieve his goals. Aside from that, there is much more to learn about Tony and the other characters in the movie. If you’re curious about how their stories unfolded, read on!

And don’t forget to check out these Moulin Rouge! quotes and Newsies quotes.

Dan Fusco: “No, Tony! You can’t f*ck the future. The future f*cks you! It catches up with you, and it f*cks you if you ain’t planned for it.”

Tony Manero: “Look, tonight is the future, and I am planning for it! There’s this shirt I gotta buy, a beautiful shirt.”

Annette: “You want a dream girl? Then go to sleep and have a nightmare.”

Tony Manero: “No. It’s a decision a girl gotta make early in life if she’s gonna be a nice girl or a cunt.”

5. Stephanie Mangano: “I’m sick of guys who ain’t got their sh*t together!”

Tony Manero: “Well, all ya need is a salad bowl and a potato masher—and you got your sh*t together!”

6. Connie: “So when is Connie going to get her answer?”

Tony Manero: “You know, Connie, if you’re as good in bed as you are on the dance floor, I’ll bet you’re one lousy f*ck.”

Connie: “Then how come they always send me flowers the next morning?”

Tony Manero: “‘Cause most guys don’t know a lousy f*ck when they’ve had one. Or I dunno. Maybe they thought you were dead.”

7. “Would ya just watch the hair? Ya know, I worked on my hair for a long time, and you hit it. He hits my hair.” – Tony Manero

8. Stephanie Mangano: “Nice move. Did you make that up?”

9. Tony Manero: “I know everything about that bridge. Know what else? There’s a guy buried in the cement.”

Tony Manero: “Know how it happened? While they were working on it, pouring the cement, he slipped off on the upper part of the bridge and, you know, fell in—dumb f*ck.”

10. “You make it with some of these chicks; they think you gotta dance with them.” – Tony Manero

Saturday Night Fever Quotes That You Will Never Forget

12. “Tony, the only way you’re gotta survive is to do what you think is right, not what they keep trying to jam you with. You let ’em do that, and you’re gonna end up in nothing but misery!” – Frank Manero Jr.

13. “You know what, Gus? I feel like breaking your broken legs!” – Tony Manero

15. “My girlfriend, she loves the taste of communion wafers.” – Bobby C.

Gus: “Oh yeah, you wouldn’t know which one it was.”

Tony Manero: “These guys can’t do nothin’ without me.”

18. Tony Manero: “She can dance, you know that? She’s got the wrong partner, of course, but she can dance.”

Funny Saturday Night Fever Quotes That Are Filled With Sarcasm

Stephanie Mangano: “Wow. Does that mean when we get married, I won’t have to change the monogram on my luggage?”

Annette: “Bet you’d ask me to lay down.”

22. Bobby C.: “I have a friend. He’s a very good friend, and he got a girl pregnant. And I wanted to know, if you had to make a choice between getting an abortion and having to get married, what would you do?”

Stephanie Mangano: “Well, who would I have to marry?”

Stephanie Mangano: “I think I’d get an abortion.”

More Saturday Night Fever Quotes for Those Who Loved This Movie

Tony Manero: “I don’t see no one givin’ you a raise down at unemployment.”

Tony Manero: “I knew you’d piss on it. Go on, just piss on it, alright? A raise says you’re good, you know? You know how many times someone told me I was good in my life? Two! Twice! Two f*ckin’ times! This raise today, and dancing at the disco! You are sure as f*ck never did! Asshole!”

Haberdashery Salesman: “As long as it doesn’t turn into a 10-year mortgage.”

Tony Manero: “I want that shirt in the window.”

Haberdashery Salesman: “Wait, let me get you a receipt.”

Tony Manero: “I trust you.”

Did These Saturday Night Fever Quotes Make You Believe That Anything Is Possible?

We all want to achieve our dreams. But, at times, the odds seem stacked against us. Some of us lose hope when we think our ambitions are unreachable, so we give up before trying to achieve them.

However, Tony Manero’s perspective is different because, for him, nothing is impossible if you work hard for it. This can be seen clearly in how Tony changed himself from a nobody to someone adored by everyone in just one night.

People who danced with him were amazed by his talent because they only knew Tony as an ordinary paint store employee. Tony is a reminder that dreams, no matter how big or unexpected by others, are possible to achieve. He taught everybody that you can be whatever you want if you just put your mind to it and make an effort to achieve it.

So, don’t give up on your dreams, even if you think they are unreachable. Instead of thinking negatively, try to imagine how things will look when you are already successful in your life. Manifest good things, and good things will come to you!

With that, we hope that these Saturday Night Fever quotes were able to inspire you to dream bigger. Always remember to follow your dreams and don’t give up!