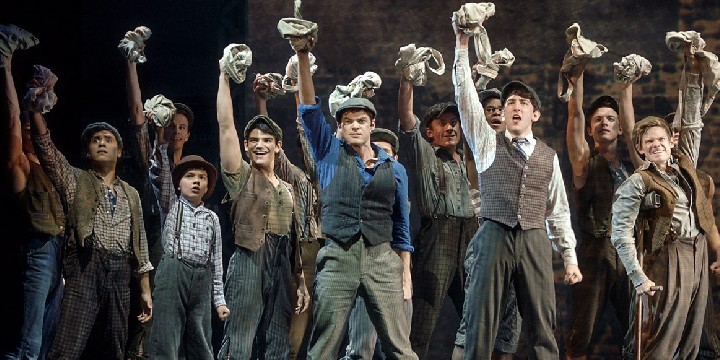 If you’re a fan of musicals or anything that’ll offer you meaningful life lessons, these Newsies quotes are all for you!

In 1992, Disney released Newsies, a movie inspired by the real-life Newsboy Strike of 1899. The story zooms in on the leader of the Newsies named Jack Kelly, a newspaper seller. He is a man who strives to have a life far from the struggles of the streets.

Jack always goes the extra mile at work to fulfill his dream of going to Santa Fe. Everything is going right until Joseph takes advantage of Jack and the other boys by raising the price of the newspaper. Devastated, Jack decided to form a union that’ll fight for what’s right.

The street boys prove that no one should settle and agree to injustice, no matter how powerful the abuser is. People need to be brave and always choose to fight for fairness and justice, as Jack Kelly did.

Newsies have a lot of scenes with valuable insights that you can reflect on in real life. So, reading this collection is a perfect choice if you want to fill your day with wisdom and bravery!

And don’t miss out these Moulin Rouge! quotes and Saturday Night Fever quotes.

1. “Sometimes, all it takes is a voice, one voice, then a thousand unless it’s silenced.” – Bryan Denton

2. David Jacobs: “My father taught us not to lie.”

Jack Kelly: “Well, mine told me not to starve. So we both have an education.”

David Jacobs: “No! We’re just a bunch of angry kids with no money.”

4. Joseph Pulitzer: “Anyone who doesn’t act in their own self-interest is a fool.”

David Jacobs: “Then what does that make you?”

Jack Kelly: “Oh, this is my pal, Davey. The Walking Mouth.”

David Jacobs: “You talk about self-interest, but since the strike, your circulation’s been down 70%. Every day you’re losing thousands of dollars just to beat us out of one lousy 10th of a cent. Why?”

Jack Kelly: “You see, it ain’t about the money, Dave. If Joe gives in to nobodies like us, it means we got the power. And he can’t do that, no matter what it costs.”

Joseph Pulitzer: “People think war is about right or wrong and not power.”

Jack Kelly: “Yeah, I heard of that too. I don’t just sell your papers, Joe. Sometimes I read them.”

9. “There’s a lot of people out there, and they ain’t just gonna go away. They got voices now, and they’re going to be listened to. Putting them in jail is not going to stop them. That’s the power of the press, Joe. So thanks for teaching me about it.” – Jack Kelly

10. “Now is the time to seize the day. Answer the call and don’t delay. Wrongs will be righted if we united!” – Jack Kelly

12. “What’d being a Newsie ever give me but a dime a day and a few black eyes? You know, I can’t afford to be a kid no more, Dave. For the first time in my life, I got money in my pockets. Real money. Money, you understand? I got more on the way, and as soon as I collect, I’m gone, I’m away, all right?” – Jack Kelly

13. David Jacobs: “You’re a liar! You lied about everything. You lied about your father being out west because he’s not out west! You didn’t even tell me your real name!”

Jack Kelly: “So? What you wanna do about it, Dave?”

David Jacobs: “I don’t understand you.”

Jack Kelly: “Oh, so let me spell it out for you. You see, I ain’t got nobody tucking me in at night, like you. It’s just me; I gotta look out for myself, all right?”

14. “You get your picture in the papers; you’re famous. You’re famous; you get anything you want. That’s what’s so great about New York.” – Racetrack Higgins

15. “We started the strike, but we can’t do it alone. So, we’re talking to Newsies all around the city.” – David Jacobs

16. Jack Kelly: “One thing’s for sure, if we don’t sell papers, then nobody sells papers. Nobody comes through those gates until they put the price back to where it was.”

17. “I’ve been hearing things from little birds. They have been chirping in my ear. Saying Jacky boy’s Newsies is playing like they’re going on strike.” – Spot Conlon

Spot Conlon: “I say—that what you say—is what I say.”

19. “I’m just not used to having whether I stay or whether I go matters to anybody. I’m not saying that it should matter to you. I’m just saying, um—but does it? Matter?” – Jack Kelly

20. “In 1899, the streets of New York City echoed with the voices of newsies. On every corner, you saw them carrying the banner. Bringing you the news for a penny a paper. Poor orphans and runaways, the newsies were a ragged army without a leader, until one day all that changed.” – Racetrack Higgins

21. David Jacobs: “All those words you said, those were mine.”

Jack Kelly: “Yeah, but you never had the guts to put them across yourself, did you?”

22. “You shouldn’t be calling people lousy little shrimps, Oscar, unless you’re referring to the family resemblance in your brother here.” – Jack Kelly

Newsies Quotes That Live in Our Heads Rent-Free

Judge: “On what grounds?”

Spot Conlon: “On the grounds of Brooklyn.”

25. “Courage cannot erase our fear. Courage is when we face our fear. Tell those with power safe in their tower. We will not obey!” – Jack Kelly

26. “Not only that, there’s a story behind the story. Thousands of children, exploited, invisible. Speak up, take a stand, and there’s someone to write about it. That’s how things get better.” – Jack Kelly

28. “Just look around at the world we’re inheriting. And think of the one we’ll create. Their mistake is they got old; that is not a mistake we’ll be making. No sir, we’ll stay young forever!” – Jack Kelly

29. “They’re waiting to see what Spot Conlon is doing; you’re the key. That Spot Conlon is the most respected and famous Newsie in all of New York and probably everywhere else. And if Spot Conlon joins the strike, then they join, and we’ll be unstoppable.” – David Jacobs

30. Racetrack Higgins: “You know that hot tip I told you about?”

Racetrack Higgins: “Nobody told the horse.”

Did These Newsies Quotes Encourage You to Stand Up for What’s Right?

When we witness abuse, we sometimes decide to remain silent out of fear or to keep the peace. However, if you are on the right side, there is nothing to be afraid of. Besides, you will never find inner peace if you allow others to mistreat you.

No matter how challenging your circumstances are, don’t let someone take advantage of you. Jack Kelly might have struggled in life, but he continues to stand for what is right. He uses his hardships and dreams as fuel to continue fighting.

Indeed, Newsies is a great eye-opener for those who are slaves of abuse. Many people may think that injustice is present because our world is just not fair. But, the truth is, the world is always giving us choices; it’s just that we sometimes fail to stand for justice.

So, learn to be brave and speak for yourself. If not, people will perceive you as simple prey and continue mistreating you. The cycle of mistreatment and injustice will thus only make things worse in our world.

Hopefully, this collection was able to encourage you to always stand for what is right, no matter how tough the situation is. In this society full of wrongdoers, you must learn to value yourself by fighting for justice and a better world.