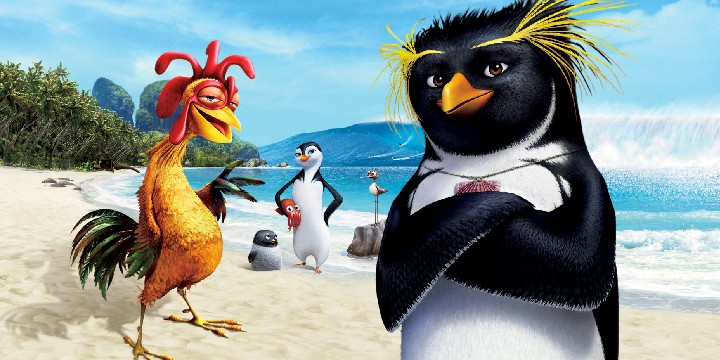 If you feel like you’re drowning in your problems, these Surf’s Up quotes will undoubtedly bring a sea of happiness back into your life!

Surf’s Up is a 2007 American animated comedy movie produced by Sony Pictures Imageworks. While surfing is the movie’s central concept, it has several underlying themes, including racism, friendship, and environmentalism.

The protagonist of the movie, Cody Maverick, was voiced by Shia LaBeouf. He’s a young penguin who dreamed of becoming a famous surfer. However, he had many challenges in his life and had to overcome obstacles put in front of him by his family, friends, and the outside world.

But, through it all, Cody kept surfing, and nothing stopped him from achieving his goals. That’s why we should be inspired by his attitude and continue pursuing our dreams, no matter how challenging our circumstances are.

So, if you’re interested in him and how the rest of the movie unfolded, read our collection of quotes below!

And don’t forget to check out these Chicken Joe quotes and Bee Movie quotes.

1. “Here I am, having a good time, riding the waves with my friends, not caring about who wins or loses but just surfing. Good old-fashioned fun, that’s, well, fun! Okay, I guess you’re just tired of hearing me talk about myself, so I’m off.” – Cody Maverick

3. “A winner is someone who doesn’t knock me off my surfboard and break it when I’m trying to get some big waves.” – Arnold

5 “I’ve been surfing ever since I can remember. It’s hard to imagine any part of my life when I wasn’t surfing.” – Cody Maverick

7. “They see their goal. They just go for it! They’re not in it for the money or the glory. They’re in it for the joy of it and the rapture and the slow-motion instant replay.” – Mikey Abromowitz

10. Filmmaker: “So, Cody, when you take your first wave, and the whole island’s there to watch, what’s it gonna be like?”

11. Filmmaker: “Aren’t you worried about being out here in the jungle? Isn’t it kinda dangerous?”

Chicken Joe: “Dude, the jungle is like the most peaceful place on the planet.”

Big Z: “I got some tests here to figure out your potential.”

Cody Maverick: “Surfing, surfing. Where do I start?”

Filmmaker: “How about just at the beginning?”

Cody Maverick: “Okay, well. So as soon as there was the first wave, right? There was the first surfer. All they needed was, like, um, a piece of driftwood, a block of ice or something like that, and then they were off. And they were hooked, man. They were hooked. Up ‘till recent times, you had your old dudes, you know, your hang-six cats, these old guys used to lay down with these huge, humongous boards. These guys were the pioneers, but nobody saw what surfing could really be until Big Z did it.”

Meaningful Surf’s Up Quotes for You to Reflect On

15. “It’s tough enough losing a father, but to go through it again—.” – Cody Maverick

16. Edna Maverick: “It really wasn’t that easy for him growing up. Like I said before, he never, he never really knew his father.”

Cody Maverick: “I’m not really the person to ask about it, truthfully, because I was too young to remember. I mean, look, I’m not the only kid on the island whose dad was—y’know—eaten.”

17. Cody Maverick: “Why didn’t you come back after you fell off the wave?”

Big Z: “That wave—that last day, winning had become everything to me. I knew I was gonna beat Tank. But then uh, you know—he starts to surf circles around me. I saw what he was doing; I couldn’t do what he was doing. Times had changed, you know, he—I didn’t wanna walk back on that beach with all my fans there, you know—loser. I’m lookin’ at Big Z, the loser, the has-been. So—poof! Big Z’s dead, and that’s how it’s gonna stay. Let me play that song.”

Cody Maverick: “What about, ‘never give up?’ What about ‘find a way?’”

Cody Maverick: “I—I thought you were the one guy.”

Cody Maverick: “Who was Big Z? You’re asking the right guy. You got that far. Z is everything. Big Z is surfing. I mean, there might as well not have been an ocean before Z. They invented the ocean for him. ‘Cause he lived so hard because he wasn’t afraid to live. He wasn’t afraid to die. He came to Antarctica when I was just a kid. Man, it was the biggest thing that ever happened here. And suddenly, there he was. Just floating over the water. Just hovering, you know, like weightless. He could’ve walked up to anyone, and he walked right up to me. And he gives me this awesome, one-of-a-kind Big Z necklace. And then he tells me, ‘You know, the kid never gives up. Find a way, ’cause that’s what winners do.’ He was the greatest. Everyone looked up to him, respected him, and loved him. And one day, one day, I’m gonna be just like him.”

Surf’s Up Quotes for All Surfers Worldwide

19. Cody Maverick: “Can we do some training? Like, seriously, please?”

Big Z: “What are you talking about? What do ya think we’re doing?”

Cody Maverick: “We’re acting like a couple of nut jobs—that’s what I think we’re doing.”

21. Big Z: “Look at that. Do you know what you’re sitting on there? This is koa wood. The best surfboards in the world are made of that stuff.”

Cody Maverick: “I don’t have a board.”

Big Z: “What? Man! I come all the way back here to give you the necklace, and now I’m offering to make you a board, and you say, ‘Nah?’ Get off your lazy butt. We’re making a board. Come on. It’ll be the best board you ever had. I’ll tell you that.”

Surf’s Up Quotes That Will Make Your Day

Chicken Joe: “No, I’m not from Shiverpool. Dude, I’m from Lake Michigan. That’s where I surf. I was the only one around my town who did it.”

24. Rob: “Dig this, Sal. The section behind me it’s called ‘The Boneyards.’ Very few surfers have ventured in there and come out alive.”

SPEN Announcer: “Are you trying to tell me people have died here?”

SPEN Announcer: “A moment of silence for them. And we keep it moving!”

26. Lani Aliikai: “Can I ask you something personal?”

Cody Maverick: “Lani, we’re in the shower together! You can say whatever you want.”

Chicken Joe: “What are you standing here next to me for? You should go talk to her.”

Chicken Joe: “Dude, she’s totally into you! She called you crap!”

28. “I promote happiness! Can you see the happiness emanating from me?” – Reggie Belafonte

Filmmaker: “Y’know, we’re here to make a movie about Cody.”

Cody Maverick: “Why does—does he have to be here?”

Glen Maverick: “Yeah, it’s gonna be great. Can I get in line now to not see it?”

30. “I could tell he needed some space and, you know, some time for himself. I didn’t want, you know, to ask him all these questions, so I just kind of stood there quietly. ‘You’re Big Z! I can’t believe it! You’re alive! You’re alive!’ That’s the respectful way to go, I think.” – Cody Maverick

Did These Surf’s Up Quotes Inspire You to Never Give Up on Your Dreams?

We all face problems and challenges in our lives. Unfortunately, not all people are like Cody Maverick, who chose to fight for his dreams and overcome his obstacles.

Choosing to give up is never an option. Like Cody Maverick, you must work hard to achieve your goals. Albeit not instantly, hard work will always pay off, and your dreams will come true if you are willing to fight for them.

So, be brave and have a positive outlook on life! You can do everything if you trust yourself and have good friends who support you, like Big Z, Chicken Joe, Lani, and Tank. After all, it’s better to surround yourself with people who will encourage you and help you achieve your goals rather than drag you down.

With that, we hope these Surf’s Up quotes were able to inspire you to overcome all your challenges in life. Always remember that you are the main character of your own story, so make sure your last chapter ends on a happy note!