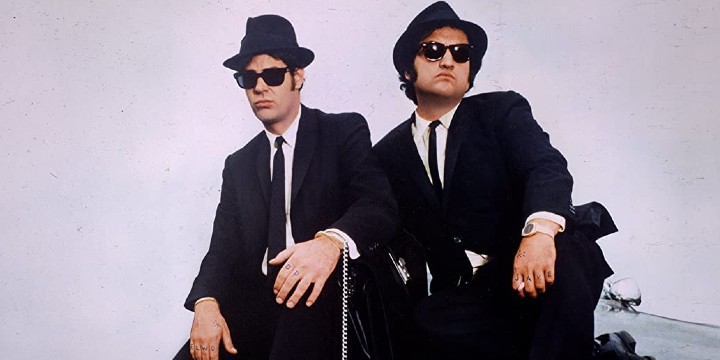 If you are into musicals, you’ll love this collection of The Blues Brothers quotes we’ve compiled to brighten your day.

The Blues Brothers is one of the most entertaining musical comedy shows filmed in Chicago, Illinois.

We’re sure you’ll also love this movie as much as we did.

So, buckle up and prepare to laugh as hard as you can while reading our collection!

And don’t forget to check out these Ghostbusters quotes.

Best Quotes From The Blues Brothers

2. “You are such a disappointing pair. It saddens and hurts me that the two young men whom I raised to believe in the Ten Commandments have returned to me as two thieves, with filthy mouths and bad attitudes.” – Sister Mary Stigmata

3. “It’s 106 miles to Chicago, we’ve got a full tank of gas, half a pack of cigarettes, it’s dark, and we’re wearing sunglasses.” – Elwood Blues

4. “We’re so glad to see so many of you lovely people here tonight. And we would especially like to welcome all the representatives of Illinois’s law enforcement community who have chosen to join us here in the Palace Hotel Ballroom at this time.” – Elwood Blues

5. “I remained celibate for you. I stood at the back of a cathedral, waiting, in celibacy, for you, with 300 friends and relatives in attendance.” – Mystery Woman

6. “The salads are fine. It’s just that we’d like to move to another table, away from those two gentlemen. Frankly, they are offensive-smelling. I mean, they smell bad.” – Elwood Blues

8. “First, you trade the Cadillac for a microphone, then you lie to me about the band, and now you’re gonna put me right back in the joint!” – Jake Blues

9. “This was a bargain. I picked it up at the Mount Prospect City police auction last spring. It’s an old Mount Prospect police car. They were practically giving them away.” – Elwood Blues

10. Reverend Cleophus James: “Have you seen the light?”

12. “Yeah, well, getting the band back together might not be that easy, Jake.” – Elwood Blues

13. “They’re not the kinda guys who write letters. You were outside, I was inside. You were supposed to keep in touch with the band. I kept asking you if we were gonna play again.” – Jake Blues

14. Jake Blues: “Bring me four fried chickens and a coke.”

Memorable Quotes and Lines From The Blues Brothers

23. “Well, what was I gonna do? Take away your only hope? Take away the very thing that kept you going in there? I took the liberty of bullshitting you.” – Elwood Blues

24. Elwood Blues: “Have you got any white bread? I’ll have some toasted white bread please.”

Mrs. Murphy: “You want butter or jam on that toast, honey?”

27. “Why da ya gotta be so negative all the time? Why can’t ya offer some constructive criticism?” – Elwood Blues

28. “Well, the Sister was right. You boys could use a little churching up. Slide on down to the Triple Rock, and catch Reverend Cleophus. You boys listen to what he’s got to say.” – Curtis

31. “It’s got a cop motor, a 440 cubic inch plant, it’s got cop tires, cop suspensions, cop shocks. It’s a model made before catalytic converters so it’ll run good on regular gas. What do you say, is it the new Bluesmobile or what?” – Elwood Blues

32. “No, I didn’t. Honest. I ran out of gas. I had a flat tire. I didn’t have enough money for cab fare. My tux didn’t come back from the cleaners. An old friend came in from out of town. Someone stole my car. There was an earthquake. A terrible flood. Locus. It wasn’t my fault. I swear to God!” – Jake Blues

35. “We got two honkies out there dressed like Hasidic diamond merchants.” – Mrs. Murphy

37. “My uncle hired the best Romanian caterers in the state. To obtain the seven limousines for the wedding party, my father used up his last favor with Mad Pete Trullo. So for me, for my mother, my grandmother, my father, my uncle, and for the common good, I must now kill you, and your brother.” – Mystery Woman

38. “You promised you’d visit the Penguin the day you got out.” – Elwood Blues

40. “You want I should wipe the dead bugs off the windshield, ma’am?” – Elwood Blues

43. “Two thousand bucks and it’s yours. You can take it home with you. As a matter of fact, I’ll throw in the black keys for free.” – Ray Charles

45. Jake Blues: “If you say no, Elwood and I will come here for breakfast, lunch, and dinner every day of the week.”

Quotes From The Blues Brothers That Will Make You Scoff

47. “Well, Jake, you look just fine down there, slithering in the mud like vermin.” – Mystery Woman

49. “How are you gonna get the band back together, Mr. Hot Rodder? Those cops have your name, your address.” – Jake Blues

50. “Curtis, I don’t want to listen to no jive-ass preacher talking to me about Heaven and Hell.” – Jake Blues

54. “At least we got a change of clothes, sucker. You’re wearing the same shit you had on three years ago.” – Willie Hall

55. “Don’t you ‘Don’t get riled, sugar’ me! You ain’t goin’ back on the road no more, and you ain’t playin’ them ol’ two-bit sleazy dives. You’re livin’ with me now, and you not gonna go slidin’ around witcho ol’ white hoodlum friends.” – Mrs. Murphy

56. “You miserable slug! You think you can talk your way out of this? You betrayed me.” – Mystery Woman

58. “No, no! I will not take your filthy stolen money!” – Sister Mary Stigmata

59. “So, Jake, you’re out, you’re free, you’re rehabilitated. What’s next? What’s happenin’? What you gonna do? You got the money you owe us, motherfucker?” – Willie Hall

60. “Get out, and don’t come back until you’ve redeemed yourselves.” – Sister Mary Stigmata

The Blues Brothers Quotes That You Will Find Amusing

61. “The use of excessive violence in the apprehension of the Blues Brothers has been approved.” – Cop

64. Jake Blues: “So far we’ve covered all of Lake, McHenry, and part of DuPage County.”

66. “We had a band powerful enough to turn goat piss into gasoline.” – Donald Dunn

67. Jake Blues: “You traded the Bluesmobile for this?”

Elwood: “No, for a microphone.”

68. “Hold it, hold it. Tomorrow night? What are you talking about? A gig like that, you gotta prepare the proper exploitation.” – Maury Sline

69. “Pardon me, but we have a strict policy concerning the handling of the instruments. An employee of Ray’s Music Exchange must be present. Now, may I help you?” – Ray Charles

70. “Look at you, in those candy-ass monkey suits. And I thought I had it bad in Joliet.” – Jake Blues

71. “Tell me a little about this electric piano, Ray.” – Murphy Dunne

73. “Everybody needs somebody to love.” – The Blues Brothers

The Blues Brothers Quotes That Will Pique Your Curiosity

79. “We’d be alright if we could just get back on the expressway.” – Elwood Blues

80. “The new Oldsmobiles are in early this year.” – Elwood Blues

82. Elwood Blues: “What kind of music do you usually have here at Bob’s Country Bunker?”

Claire: “Oh, we got both kinds. We got country and western.”

Elwood Blues: “So often, you won’t even notice.”

87. “We do sincerely hope that you all enjoy the show and please remember people, that no matter who you are and what you do to live, thrive and survive. There are still some things that make us all the same—you, me, them. Everybody! Everybody!” – Elwood Blues

88. “This money is for the year’s assessment of Saint Helen of the Blessed Shroud Orphanage in Calumet City, Illinois.” – Elwood Blues

89. “I know all about that stuff. I have been exploited all my life.” – Elwood Blues

More Quotes From The Blues Brothers

95. “My name is Jacob Stein. I’m from the American Federation of Music. I’ve been sent to see if you gentlemen are carrying your permits.” – Jake Blues

96. “Sir, where is the office of the assessor of Cook County?” – Elwood Blues

Which of the Quotes Above Created a Lasting Impression on You?

The Blues Brothers tells the story of Elwood and Jake, two petty Chicago criminals. After Jake was released from prison, they visited the orphanage where they had grown up. Sister Mary delivered the bad news that the orphanage would be closed if taxes were not paid.

The pair wanted to help the orphanage, and they believed that the Holy Spirit told them that they were on a ‘mission from God.’ They decided to find their former band members to perform and raise money.

We are unlikely to forget a film that has left an impression on us that is positive and insightful. We hope you found these quotes entertaining and maybe even gathered a few life lessons too!

What did you learn from our collection? Which quotes were most relevant to you? Leave a comment below!