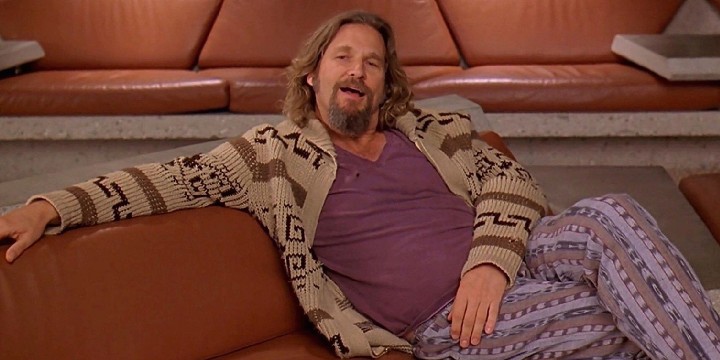 These top 25 The Dude quotes will help you live your life how you want to: away from stress and the pressures of society!

Everyone has a specific preference when it comes to living life. This is normal and completely acceptable. However, the problem lies when other people try to force their way of living or lifestyle on us.

In The Big Lebowski, we get to know a unique and non-materialistic character, The Dude. Some might consider him weird because of how unaffected he is by everyone around him. But, through this personality of his, we learn how to go with the flow and not stress about things we can’t control.

So, if you want more profound insights into The Dude and his personality, make sure you don’t miss out on this collection. We’ve got his best quotes from The Big Lebowski.

And make sure to read these The Big Lebowski quotes and Walter Sobchak quotes.

6. “I’m The Dude, so that’s what you call me. That or, uh, His Dudeness, or uh, Duder, or El Duderino—if you’re not into the whole brevity thing.”

7. “This is a very complicated case, Maude. You know, a lotta ins, lotta outs, lotta what-have-yous.”

8. “Walter, I love you, but sooner or later, you’re going to have to face the fact you’re a goddamn moron.”

The Dude Quotes for Fans of The Big Lebowski

15. “Rug pee-ers did not do this. Look at it: a young trophy wife marries this guy for his money, and she figures he hasn’t given her enough, you know, she owes money all over town.”

Short The Dude Quotes That Will Keep Your Mind Occupied

21. “You brought the f*cking pomeranian bowling?”

22. “Oh, the usual—I bowl, drive around, the occasional acid flashback.”

What’s the Best Lesson You’ve Learned From The Dude?

Fans of The Big Lebowski always say it’s more than a movie. It’s a lifestyle and a way of life for many people who find encouragement and inspiration from it. This statement is especially true for those who relate to The Dude.

We are often fed with a specific definition of success and happiness. Because we’ve grown up with people bombarding us with their advice on these topics, we slowly come to believe that happiness can only be achieved if you’re successful in your career and earning lots of money.

However, The Dude, The Big Lebowski’s main character, is the opposite of that. He is non-materialistic and finds joy in the little things. He doesn’t dwell on the stress because he knows nothing positive could come from focusing on the negatives.

The Dude is successful in life where it truly matters. So, let him serve as an inspiration, and never make money or anything material as your main goal in life. As they always say, “Money can’t buy happiness,” and that couldn’t have been more true for The Dude!