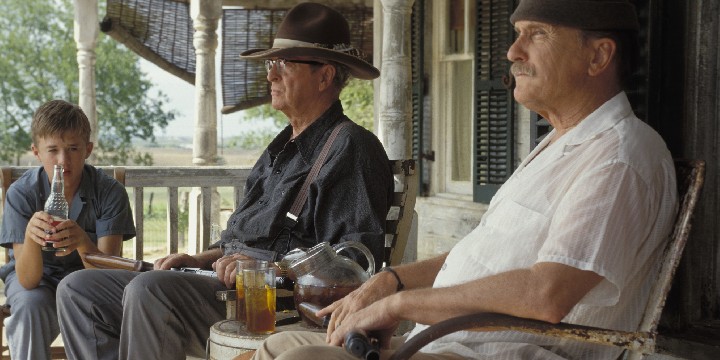 These Secondhand Lions quotes will make you realize that there are things worth believing, no matter what kind of proof—or lack thereof—you have right now!

Most people can’t trust some things without evidence. However, Secondhand Lions will prove that your will to believe is more important than any proof or reality.

This movie is about Walter Caldwell, a 14-year-old introverted boy. It all starts when Walter’s mom leaves him with his great-uncles, Hub and Garth. He is a shy boy who feels unhappy living with his eccentric great-uncles.

But, despite his initial fear and uncertainty about staying with his great-uncles, he grows to love them both. As time passes, Hub and Garth impart a lot of wisdom to Walter.

Through his great-uncles, Walter learns the beauty of trusting and believing things that make his heart swell with joy. Like what we’ve learned from Hub, remember that the only thing that matters is your capacity and willingness to believe!

To know more about Hub, Garth, and Walter, keep reading!

And don’t forget to check out these Dr. Strangelove quotes and SLC Punk! quotes.

1. Garth McCann: “Look, we don’t know anything about children, so if you need something—.”

Hub McCann: “You’d best find it yourself, or even better, learn to do without.”

2. “Sometimes the things that may or may not be true are the things a man needs to believe in the most. That people are basically good, that honor, courage, and virtue mean everything. That money and power mean nothing, and that good always triumphs over evil. And I want you to remember this, that love—true love never dies. You remember that, boy. You remember that. Doesn’t matter if it’s true or not. You see, a man should believe in those things because those are the things worth believing in.” – Hub McCann

3. Walter Caldwell: “What’s wrong with him?”

Garth McCann: “Well, a man’s body may grow old, but inside his spirit can still be as young and as restless as ever. And him, in his day, he had more spirit than 20 men.”

Hub McCann: “Right. I’m Hub McCann. I’ve fought in two world wars and countless smaller ones on three continents. I led thousands of men into battle with everything from horses and swords to artillery and tanks. I’ve seen the headwaters of the Nile, and tribes of Natives no White man had ever seen before. I’ve won and lost a dozen fortunes, killed many men, and loved only one woman with a passion a flea like you could never begin to understand. That’s who I am. Now, go home, boy.”

Hub McCann: “What do you expect us to do? Die of old age?”

6. Sheik’s Great Grandson: “So, these two men from your grandfather’s stories, they really lived?”

7. “The kid gets it all. Just plant us in the damned garden with the stupid lion.” – Walter Caldwell

8. Walter Caldwell: “Why not see what he’s selling?”

Hub McCann: “What the hell for?”

Walter Caldwell: “Well what’s the good of having all that money if you’re never gonna spend it?”

Garth McCann: “Could be the kid has a point.”

Hub McCann: “Well. We’ll see what the man’s selling. Then, we’ll shoot him.”

9. Walter Caldwell: “What happened to her?”

Garth McCann: “Looks like her heart gave out in all the excitement. She was plenty old, you know.”

Hub McCann: “She died with her boots on; that’s the main thing.”

Walter Caldwell: “She was a real lion, wasn’t she, there at the end? A real jungle lion. A real African lion.”

10. Walter Caldwell: “Is it okay if I go inside and watch television?”

Garth McCann: “Ain’t got one.”

11. Walter Caldwell: “So, can I keep him? I’ll look after him and take care of him and feed him and everything! I never had a pet of my very own before.”

Hub McCann: “So kid, you want to take care of it, nurse it back to health? Good. Then we shoot it.”

Walter Caldwell: “Don’t worry, they’re not as bad as they seem right at first.”

Secondhand Lions Quotes That’ll Encourage You to Watch the Movie

Garth McCann: “The last thing we need is some little sissy boy hanging around all summer.”

13. Helen: “You take him to the orphanage right this minute!”

Hub McCann: “Whether we take him to the orphanage or tie him up and throw him in the lake, that’s our business, not yours.”

14. “The Sheik knew that he would surely die now, without even the right to beg for mercy. But Hub just said ‘Twice I have held your life in my hands. And twice I have given it back to you. The next time—your life is mine.’” – Garth McCann

Hub McCann: “You know, you’re lucky, Stan. Lucky, the lion got to you before we did.”

18. “You know what I don’t like about houseguests? Dinner table chitchat, chitchat.” – Hub McCann

20. “Best I can figure, they were trying to fly through that barn, upside down.” – Sheriff

Are You Willing to Believe Whatever You Want to Believe?

Many of us may disagree about having faith in things that are still uncertain. However, think about the opportunities that turn into waste due to your lack of belief. Are you going to continue throwing chances by looking for evidence before believing?

In Secondhand Lions, Walter was initially unsure if he should believe his great-uncles’ near-impossible backstories. He even hesitates if his great-uncles will tell him the rest of the story when he grows up. But, as time goes by, he chooses to trust them despite any doubt.

Let’s use Walter’s journey as motivation to trust uncertainty as well. After all, if we’re sure about everything and anything, then life will be dull and boring.

Hopefully, this collection was able to make you realize that there are things in life that are worth believing, whether they’re proven true or not. Believe, manifest, and claim all you want despite the unknowns. Take that leap of faith!