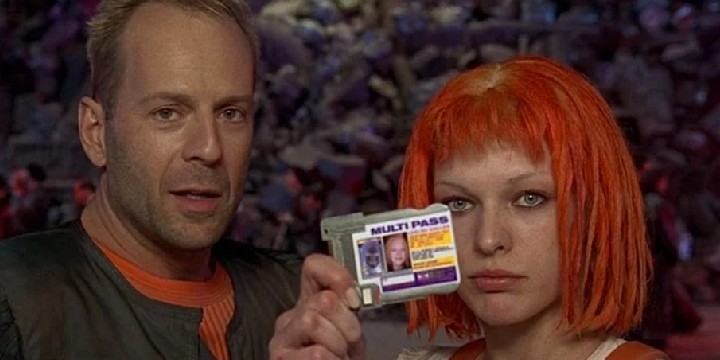 These The Fifth Element quotes are perfect for every sci-fi fan out there!

It’s pretty normal to imagine saving the world, especially when we were kids. We all wanted to be people with extraordinary strength, like the characters from The Fifth Element.

It might not seem like it, but its main characters are like our favorite superheroes. Although scary, they were willing to risk their lives for the betterment of the world!

The Fifth Element starts its story with Korben Dallas, a taxi driver who ends up on a mission to end the universe’s domination. He needs to find the four classical elements to stop the Mondoshawan.

Along the way, he meets up with Leeloo, a young woman who has been brought to life as the fifth element.

Check this list if you want to witness what happens with Leeloo and the other elements. Read through to the end and learn more about The Fifth Element!

And don’t miss out these Starship Troopers quotes.

1. Leeloo: “Everything you create, you use to destroy.”

2. Police Officer: “Sir, are you classified as human?”

Korben Dallas: “Negative, I am a meat popsicle.”

3. Aknot: “Send somebody in to negotiate!”

Korben Dallas: “You mind if I? Anybody else wanna negotiate?”

Fog: “Where did he learn how to negotiate like that?”

4. Father Vito Cornelius: “What are you doing?”

Korben Dallas: “Trying to save your ass so you can save the world.”

Korben Dallas: “Yeah, this is my wife, Leeloo.”

Korben Dallas: “Yeah, multipass, she knows it’s a multipass. Leeloo Dallas. This is my wife.”

Korben Dallas: “We’re newlyweds. Just met. You know how it is. We bumped into each other; sparks happen.”

9. “Bravo! Bravo! My compliments, little lady. Thank you for doing all the dirty work. I couldn’t have done the job myself. Hand over the stones.” – Jean-Baptiste Emanuel Zorg

10. Flight Attendant: “Mr. Rhod, you are going to have to assume your individual position.”

Ruby Rhod: “I don’t want one position. I want all positions!”

12. “I don’t like warriors. Too narrow-minded, no subtlety. And worse, they fight for hopeless causes. Honor? Huh! Honor’s killed millions of people. It hasn’t saved a single one.” – Korben Dallas

Korben Dallas: “Yeah. Just one. Why me? I retired six months ago. You remember?”

General Munro: “Three reasons. One, as a member of the elite special forces unit of the Federated Army, you are an expert in the use of all major weapons and spacecraft needed for this mission. Two, of all the members of your unit, you were the most highly decorated.”

Korben Dallas: “And the third one?”

General Munro: “Of all the members of your unit, you’re the only one left alive.”

The Fifth Element Quotes to Reminisce About Its Thrilling Scenes

Korben Dallas: “Listen, you guard this with your life, or you’re going to look like this guy here, you green?”

Father Vito Cornelius: “What do you mean, empty?”

Jean-Baptiste Emanuel Zorg: “Empty. The opposite of full. This case is supposed to be full! Anyone care to explain?”

Father Vito Cornelius: “The guardians gave the stones to someone they could trust who—who took another route—she’s supposed to contact this person in a hotel—and she’s looking for the address. Easy.”

Aknot: “You asked for a case. We brought you a case.”

Jean-Baptiste Emanuel Zorg: “A case with four stones in it! Not one or two or three, but four! Four stones! What the hell am I supposed to do with an empty case!”

Aknot: “We are warriors, not merchants.”

Aknot: “We risked our lives! I believe a little compensation is in order.”

Jean-Baptiste Emanuel Zorg: “Oh, so you are merchants, after all. Leave them one crate for the cause.”

17. Jean-Baptiste Emanuel Zorg: “Where are the stones?”

Father Vito Cornelius: “I don’t know. And even if I did know, I wouldn’t tell somebody like you.”

Jean-Baptiste Emanuel Zorg: “Why? What’s wrong with me?”

Father Vito Cornelius: “I try to serve life. But you only seem to want to destroy it.”

Jean-Baptiste Emanuel Zorg: “Oh, Father, you’re so wrong. Let me explain. Life, which you so nobly serve, comes from destruction, disorder, and chaos. Take this empty glass. Here it is, peaceful, serene, and boring. But if it is destroyed—look at all these little things. So busy now. Notice how each one is useful. What a lovely ballet ensues, so full of form and color. Now, think about all those people that created them. Technicians, engineers, hundreds of people who’ll be able to feed their children tonight so those children can grow up big and strong and have little teeny weeny children of their own, and so on and so forth. Thus, adding to the great chain of life. You see, Father, by creating a little destruction, I’m actually encouraging life. In reality, you and I are in the same business. Cheers.”

Funny The Fifth Element Quotes to Brighten Up Your Day

Father Vito Cornelius: “Weddings are one floor down, my son. Congratulations.”

Mr. Kim: “You’re not gonna open it? Could be important.”

22. Billy: “When is this snake act supposed to occur?”

23. Ruby Rhod: “We’ll find out everything there is to know about the D man—his dreams, his desires, his most intimate of intimates, and from what I’m looking at, intimate is this stud muffin’s middle name! So tell me, my man, are you nervous in the service?”

Which Quote From The Fifth Element Had the Biggest Impact on You?

In essence, The Fifth Element shows that love is the ultimate weapon to save humankind. This can also be applied to humanity at large, as love is often used as a motivation for selfless actions. Like in the movie, love is shown in many forms—love of life, responsibility, sacrifice, and even friendship.

Sometimes, we all experience difficult circumstances in life. But, like the characters in the movie, don’t ever give up. Everything will be okay if you are selfless and compassionate toward other people.

If you have these kinds of principles, then like Leelo and Korben, all your goals will eventually become a success. We know it will be challenging at first, but you can make it as long as you’re willing to fight for it. So, fight for your goals, become selfless, and spread compassion!

Hopefully, this list of The Fifth Element quotes was able to give you lessons you can remember until you get older. Whenever you’re in a situation you think you can’t overcome, read this list of quotes again. We’re confident that it will give you the motivation that will push you to do your best!