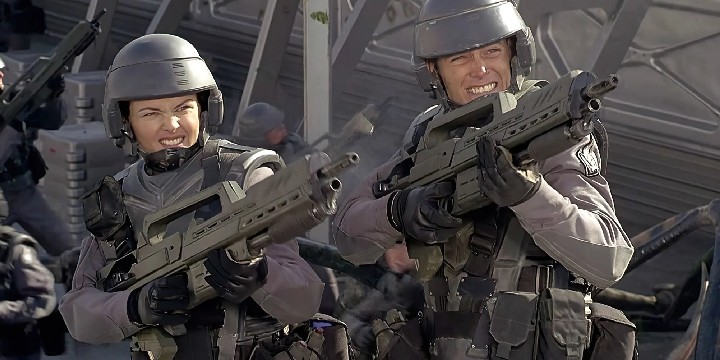 Here are some Starship Troopers quotes that will inspire you to be fearless when facing challenges in life!

Being brave is a difficult thing to do, especially when our own lives are at risk. However, Starship Troopers shows us that despite being in a place where we feel like we cannot succeed, we must keep going. It helps us recognize that even amid the chaos, there are still ways to stand up for what you believe in.

Starship Troopers glorifies the bravery, sacrifice, and patriotism of military members. That’s why there’s no denying that this movie is considered a seminal piece of art. It’s a masterpiece with plenty of inspiring lines worth quoting over and over again.

So, if you want a taste of what the movie has to offer, read our complete list below. It will give you the excitement that only Starship Troopers fans can relate to!

And don’t forget to check out these The Fifth Element quotes and Blade Runner quotes.

1. “Young people all over the globe are joining up to save the future.” – Fed Net Announcer

3. “This is for all you new people. I have only one rule. Everybody fights, no one quits. If you don’t do your job, I’ll kill you myself! Welcome to the Roughnecks!” – Jean Rasczak

4. “They’re doing their part. Are you? Join the Mobile Infantry and save the world. Service guarantees citizenship.” – Newsreel Announcer

5. Johnny Rico: “Mr. Rasczak, I want to join the Federal Service and become a citizen. But my dad thinks I should go to college and remain a civilian as he has. What should I do?”

Jean Rasczak: “Figuring things out for yourself is practically the only freedom anyone really has nowadays. Use that freedom.”

6. “Something given has no value. When you vote, you are exercising political authority; you’re using force. And forcing my friends is violence. The supreme authority from which all other authorities are derived.” – Jean Rasczak

7. “Someone asked me once if I knew the difference between a civilian and a citizen. I know now. A citizen has the courage to make the safety of the human race their personal responsibility. Dizzy was my friend. She was a soldier. But more than that, she was a citizen of the Federation.” – Johnny Rico

8. “Poor creatures. Why must we destroy you? I’ll tell you why. Order is the tide of creation, but yours is a species that worships the one over the many.” – General Jack Gordon Shepherd

9. “I expect the best, and I give the best. Here’s the beer. Here’s the entertainment. Now have fun. That’s an order.” – Jean Rasczak

10. Dizzy Flores: “My mother always told me that violence doesn’t solve anything.”

Jean Rasczak: “Really. I wonder what the city founders of Hiroshima would have to say about that—you.”

Captain Carmen Ibanez: “They wouldn’t say anything. Hiroshima was destroyed.”

Jean Rasczak: “Correct. Violence has resolved more conflicts than anything else. The contrary opinion that violence doesn’t solve anything is merely wishful thinking at its worst.”

12. “Mobile infantry does the dying. Fleet just does the flying.” – Johnny Rico

14. “One day, someone like me is going to kill you and your whole f*cking race!” – Lieutenant Zander Barcalow

16. “But in truth, you are born insane. And such misery cannot be allowed to spread.” – General Jack Gordon Shepherd

17. “Funny how they always want to be friends after they rip your guts out.” – Johnny Rico

18. Ace Levy: “Sir, I don’t understand. Who needs a knife in a nuke fight anyway? All you gotta do is push a button, sir.”

Starship Troopers Quotes to Think About

20. “This year, we explored the failure of democracy. How our social scientists brought our world to the brink of chaos. We talked about the veterans and how they took control and established the stability that has lasted for generations since. You know these facts, but have I taught you anything of value this year?” – Jean Rasczak

21. Jean Rasczak: “Rico, you once asked me for advice. Want some now?”

22. Zander Barcalow: “Forget it, Ensign. He’s mobile infantry. When you’re paid to kill, it doesn’t pay to be polite.”

Johnny Rico: “You got something to say about mobile infantry?”

Zander Barcalow: “You heard me. You want to make something of it—private?”

More Starship Troopers Quotes That You Will Never Forget

23. “One day, it will all be over. And everyone will forget that this was the moment. This was when it turned out. It wasn’t the mighty fleet; it wasn’t some fancy new weapon. It was a drill instructor named Zim who captured a brain.” – Dr. Carl Jenkins

24. “We must meet this threat with our valor, our blood, indeed with our very lives to ensure that human civilization, not an insect, dominates this galaxy now and always!” – Sky Marshal Dienes

25. Net Correspondent: “Some say the bugs were provoked by the intrusion of humans into their natural habitat, that a Live-and-let-live policy is preferable to war with the bugs.”

Johnny Rico: “Let me tell you something. I’m from Buenos Aires, and I say kill them all!”

How Did These Quotes Change the Way You View War, the Military, and More?

We all know how hard it is to sacrifice your life for the world, especially when you still have goals to accomplish. But, the characters in Starship Troopers never hesitated to give their lives for the sake of humanity. They’ve shown bravery and courage in every step they took to fight for their freedom and the human race.

Through Starship Troopers, we learn not only to be brave but also to be responsible. It tells us that we should take responsibility for our actions or whatever happens in our lives. After all, we don’t have any choice but to accept and move on with life.

Every day, we all have our own war that needs to be faced. So, it doesn’t matter what kind of path you want to pursue, as long as you possess bravery and courage. By having these principles, you can live your life fearlessly in a world full of uncertainty.

With that, we hope this list of Starship Troopers quotes was able to inspire you to face your problems head-on. Your challenges may seem too big now, but always remember to face them fearlessly so that you can conquer anything!