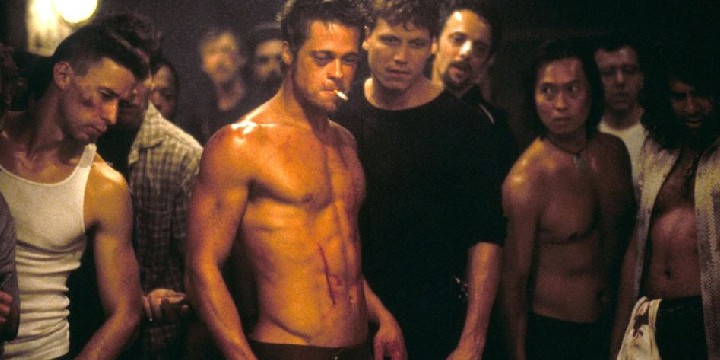 We’ve compiled our favorite Tyler Durden quotes to provide you with some advice when facing society, truth, and living your life to the fullest.

Tyler Durden is a fictional character who appeared as the central figure in Chuck Palahniuk’s 1996 novel, Fight Club.

His fascinating and profound character will slap you with reality. Moreover, we’re sure this list will give you lots of pieces of advice you can apply to your daily life.

Allow us to introduce you to some of his most memorable and inspiring quotes.

We hope that through this list, you will find the strength to fight for your dreams!

See the full collection below.

And don’t forget to check out these Fight Club quotes and Chuck Palahniuk quotes.

1. “Maybe self-improvement isn’t the answer, maybe self-destruction is the answer.”

2. “I wanted to destroy everything beautiful I’d never have.”

3. “A person had to work hard for it, but a minute of perfection was worth the effort. A moment was the most you could ever expect from perfection.”

4. “Only after disaster can we be resurrected. It’s only after you’ve lost everything that you’re free to do anything.”

5. “If you could be either God’s worst enemy or nothing, which would you choose?”

7. “This is your life and it’s ending one moment at a time.”

8. “I let go. Lost in oblivion. Dark, silent, and complete. I found freedom. Losing all hope was freedom.”

9. “This was the goal of Project Mayhem—the complete and right-away destruction of civilization.”

10. “Our fathers were our models for God. If our fathers failed, what does that tell you about God?”

11. “You wanna make an omelet, you gotta break some eggs.”

15. “If you don’t claim your humanity, you will become a statistic.”

16. “You decide your own level of involvement.”

17. “Human sacrifices were once made on the hills above this river. Bodies burnt, water speeded through the wood ashes to create lye.”

18. “Reject the basic assumptions of civilization, especially the importance of material possessions.”

19. “Hitting bottom isn’t a weekend retreat. It’s not a g*dd*mn seminar. Stop trying to control everything and just let it go.”

21. “You have to know, not fear, that someday you are going to die. Until you know that and embrace that, you are useless.”

24. “Advertising has us chasing cars and clothes, working jobs we hate so we can buy things that we don’t need. We’re the middle children of history, man. No purpose or place. We have no great war. No great depression. Our great war’s a spiritual war, our great depression is our lives.”

27. “Without pain, without sacrifice, we would have nothing—like the first monkey shot into space.”

Painful Tyler Durden Quotes That Will Pinch Your Heart

28. “We’ve all been raised on television to believe that one day we’d all be millionaires, movie gods, and rock stars. But, we won’t. And we’re slowly learning that fact.”

29. “You are not special. You’re not a beautiful and unique snowflake. You’re the same decaying organic matter as everything else. We’re all part of the same compost heap.”

31. “You have a kind of sick desperation in your laugh.”

32. “On a long enough timeline, the survival rate for everyone drops to zero.”

34. “You have to consider the possibility that God does not like you, never wanted you, in all probability he hates you. It’s not the worst thing that could happen.”

35. “Don’t you have other things to do? Is your life so empty that you honestly can’t think of a better way to spend these moments?”

36. “How much can you possibly know about yourself if you’ve never been in a fight?“

37. “Fight Club was the beginning, now it’s moved out of the basement, it’s called Project Mayhem.”

38. “We’re a generation of men raised by women. I’m wondering if another woman is really the answer we need.”

39. “With a gun barrel pressed between your teeth, you speak only in vowels.”

40. “People do it every day—they talk to themselves, they see themselves as they’d like to be, they don’t have the courage you have, to just run with it.”

41. “Fight Club exists only when fight club begins and when it ends.”

42. “You are the all-singing all-dancing crap of the world.”

43. “Sticking feathers up your butt does not make you a chicken!”

46. “It could be worse. A woman could cut off your p*n*s while you’re sleeping and toss it out the window of a moving car.”

47. “The liberator who destroys my property is fighting to save my spirit. The teacher who clears all possessions from my path will set me free.”

48. “We are consumers. We’re the by-products of a lifestyle obsession.”

53. “F*ck Martha Stewart. Martha’s polishing the brass on the Titanic. It’s all going down, man. So, f*ck off with your sofa units and strine green stripe patterns.”

61. “No! Don’t deal with this the way those dead people do. Deal with it the way a living person does.”

63. “Tomorrow will be the most beautiful day of Raymond K. Hessel’s life. His breakfast will taste better than any meal you and I have ever tasted.”

69. “Tell him. Tell him, ‘The liberator who destroyed my property has realigned my perceptions.’”

70. “Well, you did lose a lot of versatile solutions for modern living.”

72. “Hey, you created me. I didn’t create some loser alter-ego to make myself feel better. Take some responsibility!”

73. “Would you like to say a few words to mark the occasion?”

74. “In the world I see, you’re stalking elk through the damp canyon forests around the ruins of Rockefeller Center. You’ll wear leather clothes that will last you the rest of your life. You’ll climb the wrist-thick kudzu vines that wrap the Sears Tower. And when you look down, you’ll see tiny figures pounding corn, laying strips of venison on the empty carpool lane of some abandoned superhighway.”

76. “Look, the people you are after are the people you depend on—we cook your meals, we haul your trash, we connect your calls, we drive your ambulances, we guard you while you sleep. Do not f*ck with us.”

78. “Did you know if you mixed equal parts of gasoline and frozen orange juice concentrate you can make napalm?”

79. “Like splicing single frames of p*rn*gr*ph* into family films.”

80. “It’s a blanket. Just a blanket. Why do guys like you and I know what a duvet is? Is this essential to our survival in the hunter-gatherer sense of the word? No. What are we, then?”

81. “Now, ancient people found their clothes got cleaner if they washed them at a certain spot in the river. You know why?”

84. “I’ll bring us through this. As always. I’ll carry you—kicking and screaming—and in the end, you’ll thank me.”

86. “In the industry, we call them cigarette burns.”

87. “This is lye, the crucial ingredient. The lye combined with the melted fat of the bodies, till a thick white soapy discharge crept into the river. May I see your hand, please?”

88. “Stuff? Were the midterms hard? I asked you what you studied!”

89. “Okay, you are now firing a gun at your imaginary friend. Near 400 gallons of nitroglycerin!”

What Is the Biggest Risk You Have Ever Taken?

Tyler Durden emphasized how society treats people based on their material possessions. This kind of mindset is repulsive, but it is one of the realities we face today.

Control your desire to acquire material things. Sooner or later, you will realize that these are only temporary because what truly matters is your character. This movie and his character continue to remind us that to achieve our life’s dreams and goals, we must take a lot of risks.

So, don’t let fear, pain, or suffering prevent you from thriving! Don’t let society dictate what you do or who you become.

Which of these Tyler Durden quotes did you find the most entertaining? What do you dream of achieving? Share your response in the comments section below!