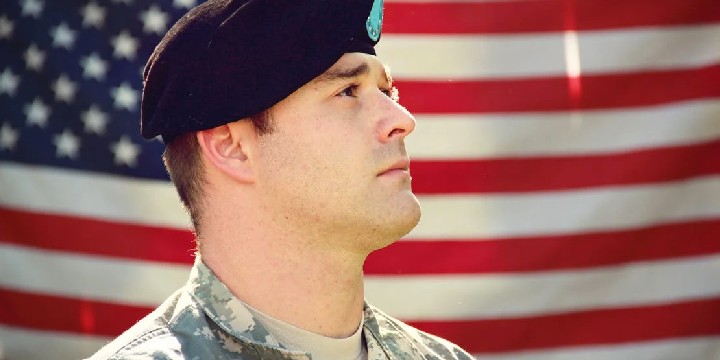 Read through this list of Veterans Day quotes and be inspired to live with gratitude!

Every 11th of November, people around the United States celebrate Veterans Day.

It is that one day that we get to salute all the brave heroes who gave so much of their lives for their country. It also serves as a reminder to remember every sacrifice they gave while serving, both during times of war and times of peace.

Veterans Day is celebrated nationwide with parades, ceremonies, and other traditional activities. But, it doesn’t really matter how you express your gratitude toward our heroes.

The most important thing is that you remember them every day and say thanks in your heart for everything they did for our country.

Whenever they visit home after their service, show them respect and welcome them with open arms!

If you want to see just how important it is to say thanks for all our heroes’ sacrifices, read through this list of Veterans Day quotes!

The collection below contains inspiring quotes that will make you appreciate all the military personnel in the world.

And don’t forget to check out these Memorial Day quotes and Flag Day quotes.

1. “On this Veterans Day, let us remember the service of our veterans, and let us renew our national promise to fulfill our sacred obligations to our veterans and their families who have sacrificed so much so that we can live free.” – Dan Lipinski

2. “This country has not seen and probably will never know the true level of sacrifice of our veterans.” – Thomas M. Smith

3. “Veterans Day is an acknowledgment that those willing to make the ultimate sacrifice for our country and their families deserve our admiration and respect today and every day.” – Elizabeth Esty

4. “Honoring the sacrifices many have made for our country in the name of freedom and democracy is the very foundation of Veterans Day.” – Charles B. Rangel

5. “While only one day of the year is dedicated solely to honoring our veterans, Americans must never forget the sacrifices that many of our fellow countrymen have made to defend our country and protect our freedoms.” – Randy Neugebauer

6. “Honor to the soldier and sailor everywhere, who bravely bears his country’s cause. Honor, also, to the citizen who cares for his brother in the field and serves, as best he can, the same cause.” – Abraham Lincoln

9. “To us in America, the reflections of Armistice Day will be filled with lots of pride in the heroism of those who died in the country’s service and with gratitude for the victory, both because of the thing from which it has freed us and because of the opportunity it has given America to show her sympathy with peace and justice in the councils of the nations.” – Woodrow Wilson

10. “The young patriots now returning from war in Iraq and Afghanistan and other deployments worldwide are joining the ranks of veterans to whom America owes an immense debt of gratitude.” – Steve Buyer

12. “To all who have put their lives on the line in defense of the flat, thank you.” – Anonymous

13. “Who kept the faith and fought the fight; the glory theirs, the duty ours.” – Wallace Bruce

14. “Their remembrance be as lasting as the land they honored.” – Daniel Webster

15. “Never was so much owed by so many to so few.” – Winston Churchill

Veterans Day Quotes to Remember and Thank Our Brave Soldiers

18. “But this Veterans Day, I believe we should do more than sing the praises of the bravery and patriotism that our veterans have embodied in the past. We should take this opportunity to re-evaluate how we are treating our veterans in the present.” – Nick Lampson

19. “To our men and women in uniform, past, present, and future, God bless you and thank you.” – Anonymous

20. “The willingness of America’s veterans to sacrifice for our country has earned them our lasting gratitude.” – Jeff Miller

21. “Our debt to the heroic men and valiant women in the service of our country can never be repaid. They have earned our undying gratitude.” – Harry S. Truman

22. “Better than honor and glory, and history’s iron pen, was the thought of duty done and the love of his fellow men.” – Richard Watson Gilder

23. “We owe our World War II veterans—and all our veterans—a debt we can never fully repay.” – Doc Hastings

24. “America’s veterans have served their country with the belief that democracy and freedom are ideals to be upheld around the world.” – John T. Doolittle

25. “My heroes are those who risk their lives every day to protect our world and make it a better place—police, firefighters, and members of our armed forces.” – Sidney Sheldon

26. “The brave men, living and dead, who struggled here, have consecrated it, far above our poor power to add or detract. The world will little note, nor long remember what we say here, but it can never forget what they did here.” – Abraham Lincoln

Veterans Day Quotes for Those Who Want to Salute Our Military

27. “The veterans of our military services have put their lives on the line to protect the freedoms that we enjoy. They have dedicated their lives to their country and deserve to be recognized for their commitment.” – Judd Gregg

28. “The sanctity of our battlefields, monuments, and veterans institutions is of utmost importance to preserve military history and pay respect to those who fought.” – Henry Waxman

29. “I respect every soldier, from every country, who serves beside us in the hard work of history. America is grateful, and America will not forget.” – George W. Bush

30. “The willingness with which our young people are likely to serve in any war, no matter how justified, shall be directly proportional to how they perceive the veterans of earlier wars were treated and appreciated by their nation.” – George Washington

31. “In order to ensure proper and widespread observance of this anniversary, all veterans, all veterans’ organizations, and the entire citizenry will wish to join hands in the common purpose.” – Dwight D. Eisenhower

32. “How important it is for us to recognize and celebrate our heroes and she-roes!” – Maya Angelou

33. “We must never forget why we have and why we need our military. Our armed forces exist solely to ensure our nation is safe so that each and every one of us can sleep soundly at night, knowing we have guardians at the gate.” – Allen West

34. “This year’s Veterans Day celebration is especially significant as our country remains committed to fighting the War on Terror and as brave men and women are heroically defending our homeland.” – John T. Doolittle

35. “Because all of us believe and understand in the fabric of the common bond of why we call ourselves American is to care for the men and women who wear the uniform; and when they take off the uniform, we care for them when they are veterans.” – Steve Buyer

36. “It’s about how we treat our veterans every single day of the year. It’s about making sure they have the care they need and the benefits that they’ve earned when they come home. It’s about serving all of you as well as you’ve served the United States of America.” – Barack Obama

37. “Well, look at what people are doing for returned veterans now. The wounded warriors. They’re working hard to make the wounded veterans feel that they are loved and welcomed home, unlike in Vietnam. It was not a very kind, gentle world then. I think we are kinder and gentler.” – Barbara Bush

38. ”America’s veterans embody the ideals upon which America was founded more than 229 years ago.” – Steve Buyer

39. “I can imagine no more rewarding a career. And any man who may be asked in this century what he did to make his life worthwhile, I think can respond with a good deal of pride and satisfaction: ‘I served in the United States Navy.’” – John F. Kennedy

40. “Our veterans accepted the responsibility to defend America and uphold our values when duty called.” – Bill Shuster

How Do You Express Your Gratitude Toward the People Who Secure and Protect Your Freedom?

On Veterans Day, we remember those who paid and continue to pay the ultimate price for our freedom and liberty. Given that, we must keep in mind what our veterans have done for the sake of our nation.

The freedom we have now is only possible because of our veterans’ tireless effort to keep peace and protect our rights. Without them, who knows where we’d be right now?

Being away from family and constantly at risk of injury or death is not easy. And, to be committed to this service is to have a determined will and an undying love for the nation’s people. All of these things are hard, but our soldiers continue fighting, no matter what.

Indeed, being a soldier is no easy feat. It demands so much of you physically, emotionally, and mentally.

With that, we hope this list of Veterans Day quotes made you appreciate each and every one of our soldiers—old, new, and even those in training! Remember to take this time every year to honor the courageous men and women who fight for our rights and freedom.