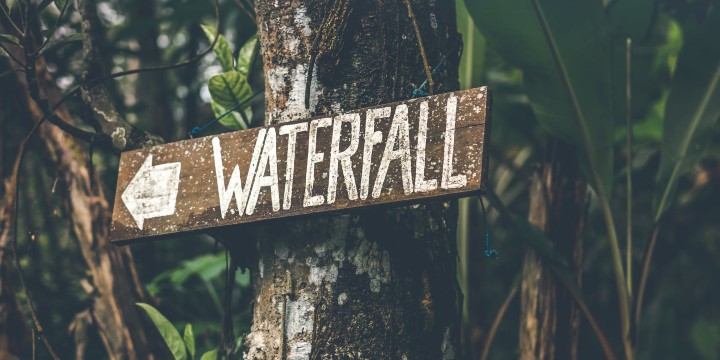 Read these waterfall quotes to learn about the wisdom that comes with freedom and going with the flow.

The waterfall is one of the most relaxing but powerful gifts of nature. Once you hear the splashing of water as it falls, the mind is refreshed, and our soul is calmed. At the same time, its incredible force shapes the rocks that form the beautiful lateral flowing of water.

Our collection below will enlighten you about the meaningful metaphors that nature brings into our lives. So, if you are interested in the beauty of waterfalls, then add this to your must-read list now!

And make sure to check out these sea quotes and lake quotes.

1. “A waterfall cannot be silent, just as wisdom. When they speak, the voice of power speaks.” – Mehmet Murat İldan

2. “Run wild and free like a waterfall.” – Anamika Mishra

3. “Waterfalls are exciting because they have power, they have rainbows, they have songs, and they have boldness and craziness!” – Mehmet Murat İldan

4. “There is a hidden message in every waterfall. It says, if you are flexible, falling will not hurt you.” – Mehmet Murat İldan

5. “There’s no better place to find yourself than sitting by a waterfall and listening to its music.” – Roland R Kemler

6. “It’s no coincidence that every depiction of paradise seems to include a waterfall.” – Sophie Clapton

7. “There is a waterfall in every dream. Cool and crystal clear, it falls gently on the sleeper, cleansing the mind and soothing the soul.” – Virginia Alison

8. “While people are struggling unhappily in the cities against the cruel authorities, a waterfall happily and cheerfully flows in nature. There is happiness only if there is freedom!” – Mehmet Murat İldan

9. “Waterfalls wouldn’t sound so melodious if there were no rocks in their way.” – Rishabh Gautam

10. “Look with open eyes, and you will see the beauty of the waterfall.” – Anthony T. Hincks

12. “Many a calm river begins as a turbulent waterfall, yet none hurtles and foams all the way to the sea.” – Mikhail Lermontov

13. “When the moonlight and the waterfall come together, all other things fade from the scene!” – Mehmet Murat İldan

Waterfall Quotes That Will Inspire You

14. “Look for tomorrow behind every waterfall.” – Anonymous

16. “There’s hope at the bottom of the biggest waterfall.” – Patrick Ness

17. “Do not feel sad for your tears, as rocks never regret the waterfalls.” – Munia Khan

18. “A strong person and a waterfall always carve their own path.” – Anonymous

19. “Grace is finding a waterfall when you were only looking for a stream.” – Vanessa Hunt

20. “And down the waterfall, wherever it may take me, I know that life won’t break me when I come to call.” – Robbie Williams

Waterfall Quotes That Will Teach You Valuable Lessons

21. “A waterfall is concerned only with being itself, not with doing something it considers waterfall-like.” – Vernon Howard

22. “Life is like a waterfall. It is always moving, and there is always an uneven flow to it.” – Anonymous

23. “And when you hear the sound of the waterfall coming nearer and nearer, tidy up the boat, put on your best tie and hat, and smoke a cigar right up ’till the moment you go over. That’s a triumph.” – Ray Bradbury

24. “Look for yourself in the waterfall, still for just a moment before moving on again.” – Anonymous

25. “There’s nobody living who couldn’t stand all afternoon in front of a waterfall. Anyone who can sit on a stone in a field awhile can see my painting. Nature is like parting a curtain. You go into it as you would cross an empty beach to look at the ocean.” – Agnes Martin

27. “Our lives flow like water in a waterfall.” – Anonymous

29. “Dreams are made of trails and waterfalls.” – Anonymous

30. “When you’re young, there’s so much that you can’t take in. It’s pouring over you like a waterfall. When you’re older, it’s less intense, but you’re able to reach out and drink it. I love being older.” – Sigourney Weaver

31. “Valuable lessons can be learned from every waterfall.” – Anonymous

32. “Lessons from a waterfall: keep moving, and you will eventually get over it.” – Anonymous

33. “The power of a waterfall is nothing but a lot of drips working together.” – Anonymous

34. “Remember, the trick to not getting swept over the waterfall is swimming upstream.” – Anonymous

35. “No matter how powerful a waterfall is, it cannot be heard from far away because all waterfalls are local. If you want the whole world to hear you, take a universal position where all can see you, just like the moon, just like the sun.” – Mehmet Murat İldan

36. “There’s nothing like the sound of a waterfall to drown out a noisy world.” – Sophie Clapton

37. “The point is that when I see a sunset or a waterfall or something, for a split second, it’s so great because for a little bit, I’m out of my brain, and it’s got nothing to do with me.” – Chris Evans

38. “When I was walking in the mountains with the Japanese man and began to hear the water, he said, ‘What is the sound of the waterfall?’ ‘Silence,’ he finally told me.” – Jack Gilbert

42. “Let this waterfall wash over me.” – Anonymous

43. “Grace be the waterfall in the wild of my mind.” – Anonymous

44. “Another way to look at meditation is to view thinking itself as a waterfall, a cascading of thought. In cultivating mindfulness, we are going beyond or behind our thinking, much the way you might find a vantage point in a cave or depression in the rock behind a waterfall. We still see and hear the water, but we are out of the torrent.” – Jon Kabat-Zinn

45. “Under the waterfall, take your time. I don’t mind if we stay in the rain. These liquid skies will show the way.” – Anever

46. “I love the sounds and the power of pounding water, whether it is the waves or a waterfall.” – Mike May

47. “Just as a waterfall grows slower and more lightly suspended as it plunges down, so the great man of action tends to act with greater calmness than his tempestuous desires prior to the deed would lead one to expect.” – Friedrich Nietzsche

48. “Young leaves, the sound of a waterfall, heard from far and near.” – Yosa Buson

49. “For an instant, silence, noisier than a waterfall.” – Salman Rushdie

52. “I keep my gratitude in my smile, a glistening waterfall in the sun.” – Sanober Khan

54. “We start in different places, but in the end, we all meet at the waterfall.” – Anonymous

55. “Do you seek adventure beyond the treacherous waterfalls? Do you seek the mythical being that dwells in this unreachable place? If you do, then you must first find me.” – Anonymous

56. “At the source of the longest river, the voice of the hidden waterfall and the children in the apple tree, not known because not looked for, but heard, half-heard, in the stillness between two waves of the sea.” – T. S. Eliot

58. “The river plunged down in a long waterfall, plashing into several rocky pools on its way down the cliff.” – Alison Croggon

59. “I can see my rainbow calling me through the misty breeze of my waterfall.” – Jimi Hendrix

60. “There is nothing more magical than a waterfall.” – Anonymous

61. “It was a world of acts, and words had no more influence on acts than the sound of a waterfall has on the flow of the stream.” – Kim Stanley

62. “Waterfalls are the pirouettes of a river’s dance.” – Sophie Clapton

63. “The only thing better than waterfalls and sunsets are waterfalls at sunset.” – Sophie Clapton

64. “Every teardrop is a waterfall.” – Coldplay

Waterfall Quotes for the Romantics

65. “Your love is like a waterfall, running wild and free.” – Chris Tomlin

67. “The fall of your hair is rushing through my head like elegant waterfalls repeatedly dancing down into an open riverbed.” – Curtis Tyrone Jones

68. “When you are outpouring your emotion, it is like me trying to climb up a waterfall to get to you. But if you are calm and have faith in me, I can sail right over to you on the still waters of your soul.” – Kate McGahan

70. “All anyone can hope is just a tiny bit of love, like a drop in a cup if you can get it, or a waterfall, a flood, if you can get that too.” – Edwidge Danticat

71. “I’m just like a waterfall falling, falling for you again.” – Meghan Trainor

72. “She dares me to pour myself out like a living waterfall. She dares me to enter the soul that is more than my own. She extinguishes fear in mere seconds. She lets light come through.” – Virginia Woolf

Waterfall Quotes That Will Encourage You to Travel

74. “Make memories one waterfall at a time.” – Anonymous

75. “The waterfall is nature’s laughter.” – Anonymous

76. “Life is better with waterfalls.” – Anonymous

77. “Waterfalls are the bacon of landscape photography. There’s nothing they don’t make better.” – Sophie Clapton

78. “These waterfalls have me roaring with excitement.” – Anonymous

79. “The waterfall winks at every passerby.” – Marty Rubin

81. “Advice from a waterfall: make a splash!” – Anonymous

Waterfall Quotes to Learn About the Beautiful Wonders of the Earth

82. “When God takes a shower, waterfalls come to life around the world.” – Anthony T. Hincks

83. “A very wise quote is a spectacular waterfall! When you see it, you feel its power!” – Mehmet Murat İldan

84. “Sometimes, it’s hard to tell how fast the current’s moving until you’re headed over a waterfall.” – Kimberly McCreight

85. “It was a war between the waterfall and the water bed, attacking one another with all their might. Almost as if each drop of water was competing in a race to get there first or to make the loudest sound, as it was the only thing any of us could hear.” – Anonymous

86. “I would caption this with a waterfall pun but that’s too mainstream.” – Anonymous

87. “Why do people love waterfall jokes? Because they always make a splash.” – Sophie Clapton

90. “Waterfalls are a funny thing. The only difference between an ordinary river and a major tourist attraction is that 10-foot drop.” – Sophie Clapton

Did These Waterfall Quotes Enlighten You About the Flow of Life?

A waterfall is a symbol of continuous change. The drops of water reshape the rocks that give birth to a new shape every time.

However, no matter how many times the waterfall changes its beauty, its primary form remains the same. This mechanism is similar to how we grow as humans but, at the same time, stay as the people we were since childhood. Somehow, waterfalls remind us to go back to our roots and let time shape and change us into better people.

We hope that these waterfall quotes were able to help you realize things about yourself. Moreover, keep in mind that you have the power inside you to change your path. Go with the flow of life and emerge with strength, just like the waterfall!