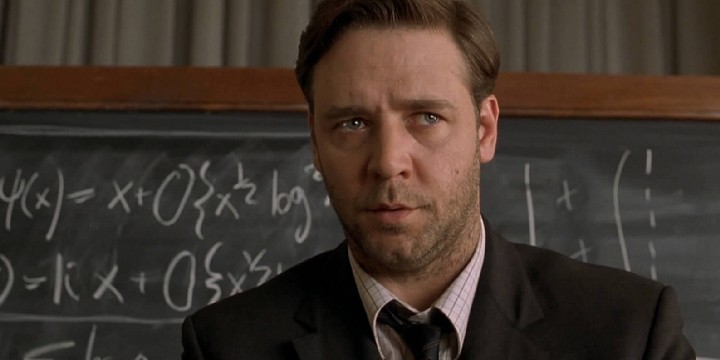 Here are the best A Beautiful Mind quotes that will warm your heart and make you reflect on life!

A Beautiful Mind is a 2001 biographical movie that tells the tale of a mathematician, John Nash. Its main storyline was based on Sylvia Nasar’s 1998 book. The movie also tackles Nash’s paranoid schizophrenia and delusional episodes and how they affected his life with his family and friends.

Mental illness is taboo for most people, which is why this movie should be celebrated. A Beautiful Mind, after all, shows that recovery and hope are possible even for someone with schizophrenia. John Nash even won a Nobel Prize!

We shouldn’t stereotype mental illnesses; even more so, we shouldn’t sweep these issues under the rug. Instead, we must create a platform for communication.

So, if you can relate to John Nash’s struggles, read on. We have the best quotes that’ll speak to your soul.

1. “I’ve always believed in numbers, in equations, in logic, and reason. But after a lifetime of such pursuits, I ask, what truly is logic? Who decides reason? My quest has taken me to the physical, the metaphysical, the delusional, and back. I have made the most important discovery of my career​​—the most important discovery of my life. It is only in the mysterious equations of love that any logic or reasons can be found. I am only here tonight because of you. You are the only reason I am. You are all my reasons. Thank you.” – John Nash

2. “Perhaps it is good to have a beautiful mind, but an even greater gift is to discover a beautiful heart.” – John Nash

3. “The only thing greater than the power of the mind is the courage of the heart.” – John Nash

4. “Nothing’s ever for sure, John. That’s the only sure thing I do know.” – Charles Herman

5. “I don’t believe in luck, but I do believe in assigning value to things.” – John Nash

6. “You can’t come up with a formula to change the way you experience the world.” – John Nash

8. “I need to believe that something extraordinary is possible.” – John Nash

Alicia Nash: “How do you know?”

John Nash: “I know because all the data indicate it.”

Alicia Nash: “But it hasn’t been proven yet.”

Alicia Nash: “You haven’t seen it. How do you know for sure?”

A Beautiful Mind Quotes That’ll Make You Think About Life

10. “Imagine if you suddenly learned that the people, the places, the moments most important to you were not gone, not dead, but worse, had never been. What kind of hell would that be?” – Dr. Rosen

11. “Classes will dull your mind—destroy the potential for authentic creativity.” – John Nash

13. “What is work without innovation?” – John Nash

15. “Mathematics—mathematics is never going to lead you to higher truth, and you know why? Because it’s boring!” – Charles Herman

16. “I’ve gotten used to ignoring them, and I think, as a result, they’ve kind of given up on me. I think that’s what it’s like with all our dreams and our nightmares, Martin. We’ve got to keep feeding them for them to stay alive.” – John Nash

18. “They are my past. Everyone is haunted by their past.” – John Nash

19. “This class will be a waste of your—and what is infinitely worse—my time.” – John Nash

Dr. Rosen: “Because your mind is where the problem is in the first place!”

A Beautiful Mind Quotes for Fans of Biographical Movies

21. John Nash: “You once said that God must be a painter because he gave us so many colors.”

Alicia Nash: “I didn’t think you were listening.”

John Nash: “I was listening.”

Martin Hansen: “No. They were wrong, John. No one wins.”

24. John Nash: “Alicia, does our relationship warrant long-term commitment? I need some kind of proof, some kind of verifiable, empirical data.”

Alicia Nash: “I’m sorry; just give me a moment to redefine my girlish notions of romance.”

John Nash: “You are exceptionally odd.”

Alicia Nash: “I bet you’re very popular with the girls.”

27. “If we all go for the blonde and block each other, not a single one of us is going to get her. So then we go for her friends, but they will all give us the cold shoulder because no one likes to be the second choice. But what if none of us goes for the blonde? We won’t get in each other’s way, and we won’t insult the other girls. It’s the only way to win. It’s the only way we all get laid.” – John Nash

More A Beautiful Mind Quotes for Everyone Who Read the Book

28. “People look to the order of numbers when the world falls apart.” – Sylvia Nasar, Author

29. “A profound dislike for merely absorbing knowledge and a strong compulsion to learn by doing is one of the most reliable signs of genius.” – Sylvia Nasar, Author

30. “It was like a tornado; you want to hold on to everything you have; you don’t want to let anything go.” – Sylvia Nasar, Author

How Has A Beautiful Mind Changed Your Views on Mental Illnesses?

Over 700 million people worldwide have some kind of mental illness. So, why is it such a taboo for others? Many people shy away from any discussion involving this topic when really, it’s one of the things that require everyone’s attention.

Because of the stigma surrounding mental illnesses, people tend to think that you’d automatically fail in life if you have this condition. However, John Nash gives us hope and helps us believe that extraordinary things are possible, even for people suffering from mental illnesses.

Whatever condition you have can’t stop you from achieving your dreams. After all, the only thing that could genuinely hinder you from reaching your goals is yourself. You’ll never get to the top if you don’t have the patience, determination, and drive to move forward despite countless failures.

John Nash seemed to have everything against him. He had paranoid schizophrenia, and he was slowly getting distanced from his family and friends. Yet, despite all these struggles, John Nash tried to move forward and heal.

Sometimes, facing mental illnesses is all about coping. But, there will also be times when you must change something within yourself; remember that healing is internal. With that, we hope this list of the best A Beautiful Mind quotes was able to give you some hope and encouragement!