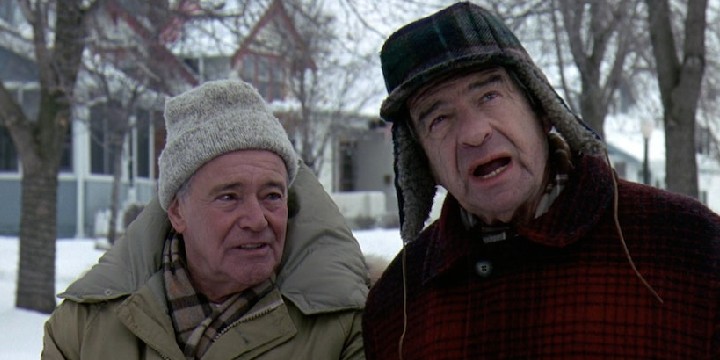 If you’ve ever had a misunderstanding with people close to you, then you’ll undoubtedly relate to these Grumpy Old Men quotes we’ve gathered!

Grumpy Old Men is a movie about two elderly men named John and Max. They were childhood best friends who later on turned into rivals. They’ve been feuding for years, and their conflict intensified when a woman named Ariel moved into their neighborhood.

Both men were attracted to Ariel and were willing to go the extra mile to win her heart. Yet, fate found its way to make John and Max recognize what friendship and life genuinely mean. They realize that they are getting older each day, so they must spend every second without holding onto grudges.

Their love triangle might have sparked some conflict, but it also became a bridge that helped the two reconcile. To better understand their friendship and how they could let go of old grudges, keep reading to the end!

Ariel Truax: “I do, too! And I also know the only thing in life that you regret are the risks that you don’t take.”

2. “If I had known I would be doing a nude scene, I’d have asked for another million.” – Max Goldman

4. “When I had my ulcers, I was farting razor blades.” – Max Goldman

Elliott Snyder: “Have you seen him?”

Max Goldman: “The man’s crazy. Loco. Always hanging out around those kinky strip bars. You know, the ones where the men take their clothes off. That’s, of course, if he’s taken his medication.”

Max Goldman: “Yes. Without it, he could be anywhere. Wandering around talking to the trees. I’m telling you, the man’s a menace. He’s always drinking, starting fights.”

Ariel Truax: “John, when was the last time you made love?”

9. “There are many fish In the sea, but you’re the only one I’d want to stuff and mount over my fireplace.” – Max Goldman

10. Max Goldman: “You know what Jacob said? Jacob said that old Billy Henchel was killed in a car crash. Head-on collision with a freight truck. Cleared his car straight over the bridge into the Mississippi.”

Max Goldman: “Hey, Snyder! Why don’t you do the world a favor and take your lower lip and pull it over your head and swallow?”

12. “Each year comes and goes, and I’m still here. Ha! And they keep dying. You know? Sometimes I wonder if God forgot about me.” – John Gustafson Sr.

13. John Gustafson Jr.: “Nobody slept with anybody.”

John Gustafson Sr.: “Speak for yourself.”

14. John Gustafson Jr.: “Did you hear? Someone moved into the old Klickner place? A woman.”

John Gustafson Sr: “Did you mount her?”

John Gustafson Sr: “Well, the woman, does she have big thighs?”

John Gustafson Sr: “No? Then what’s the problem? If I was a young fella like you, I’d be mounting every woman in Wabasha.”

16. “A stroke’s no damn good. You could end up a vegetable! Give me a cardiac any day.” – John Gustafson Jr.

20. “I got a cactus in my bathroom, but we got nothing to say to each other.” – Max Goldman

Grumpy Old Men Quotes for Those Who Enjoyed the Story

Max Goldman: “That’s because you won’t be here.”

24. Max Goldman: “You’re trying to steal her away like you did to Mae.”

John Gustafson Jr.: “I was married to the woman for 20 years; she was no prize!”

John Gustafson Jr.: “Well, that’s why you’re a moron! If you’d had Mae you wouldn’t have had Amy! And Amy was a good woman!”

Max Goldman: “She was the best.”

John Gustafson Jr.: “Yeah, and she was a darned sight more loyal than Mae ever was!”

25. John Gustafson Sr.: “Last Thursday, I turned 95 years old. And I never exercised a day in my life. Every morning, I wake up, and I smoke a cigarette. And then I eat five strips of bacon. And for lunch, I eat a bacon sandwich. And for a midday snack?”

26. John Gustafson Sr.: “And finally, the baby bear looked, and he said, ‘Somebody’s sleeping in my bed, and the bastard’s still there!’ But Goldilocks had a Remington semi-automatic, with a scope and a hair-trigger!”

Allie, Melanie’s Daughter: “That’s not the way it goes!”

John Gustafson Sr.: “And that was the end of the three bears.”

More Grumpy Old Men Quotes That Zoom in on Arguments

Max Goldman: “He started it.”

John Gustafson Jr.: “Oh! That’s me and the moron.”

Ariel Truax: “Is that Max?”

Ariel Truax: “Aw, you mean you were friends?”

Ariel Truax: “What makes two men spend most of their lives fighting?”

Ariel Truax: “A woman! How romantic.”

John Gustafson Jr.: “No, it wasn’t romantic at all.”

Did This Collection Motivate You to Throw Away All of Your Grudges?

In life, there are so many people and circumstances that’ll disappoint you. The worst is, it may come from the people you care about. John and Max’s friendship is a good example; they were once great friends, but bad choices and actions shattered their bond.

Trust between friends can come quickly, but it’s hard to build it back up again when it’s shattered. In the movie, John and Max could not communicate properly; this caused pain to linger in their hearts and minds. Thus, years of their lives were wasted, and they could not spend time together as friends.

When faced with the same situation, try to listen, be open, and forgive. You must forgive not because you tolerate others’ mistakes but because you value your own peace of mind. After all, you can’t be completely happy if your heart and mind are full of bitterness.

Our life is short. Stop wasting valuable time wallowing in regret and pain. Remember, grudges can keep us from being happy and moving on with our lives.

Hopefully, this collection was able to inspire you to let go of all the things that keep your life dull and sad. Don’t ever let others poison your happiness!