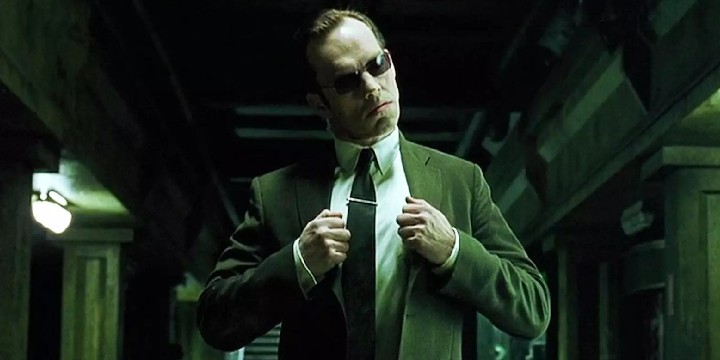 If you’re curious about the most iconic villain of The Matrix movie franchise, then this list of 50 Agent Smith quotes is for you.

Agent Smith is the trilogy’s main antagonist and a former Matrix agent. After being destroyed by Neo, he went into exile and manifested as a computer virus with the uncanny ability to multiply.

You’ve probably seen The Matrix movies a thousand times, but there are a lot of things about Agent Smith you’re unaware of. Allow these quotes to help you learn more about him and the reasons for his actions. If you liked his character in the movies, you should definitely read through to the end.

And don’t forget to check out these The Matrix quotes and Morpheus quotes.

1. “What matters is that whatever happened, happened for a reason.”

3. “Still using all the muscles except the one that matters?”

4. “Human beings are a disease, a cancer of this planet.”

5. “What has the world come to when you can’t even trust a program?”

6. “Go ahead, shoot. The best thing about being me―there’s so many of me.”

7. “You know the difference between us, Tom? Anyone could have been you. Whereas I’ve always been anyone.”

8. “It seems that you’ve been living two lives. One of these lives has a future, and one of them does not.”

12. “I remember chasing you is like chasing a ghost.”

13. “I know it does. I have seen it. That’s why the rest of me is just going to enjoy the show because I already know that I’m the one that beats you.”

14. “We’re willing to wipe the slate clean, give you a fresh start. All that we’re asking in return is your cooperation in bringing a known terrorist to justice.”

18. “I’ve been thinking about us, Tom. Look how binary is the form, the nature of things. Ones and zeros. Light and dark. Choice and its absence. Anderson and Smith.”

19. “Illusions, Mr. Anderson. Vagaries of perception. Temporary constructs of a feeble human intellect trying desperately to justify an existence that is without meaning or purpose.”

20. “You destroyed me, Mr. Anderson. Afterward, I knew the rules, I understood what I was supposed to do, but I didn’t. I couldn’t.”

21. “Why, Mr. Anderson? Why, why, why? Why do you do it? Why? Why get up? Why keep fighting? Do you believe you’re fighting for something? For more than your survival? “

22. “Things have changed. The market’s tough. I’m sure you can understand why our beloved parent company, Warner Bros., has decided to make a sequel to the trilogy.”

Agent Smith Quotes From The Matrix

23. “And all of them as artificial as the Matrix itself, although only a human mind could invent something as insipid as love.”

24. “But I believe that, as a species, human beings define their reality through misery and suffering. The perfect world was a dream that your primitive cerebrum kept trying to wake up from.”

25. “Did you know that the first Matrix was designed to be a perfect human world? Where none suffered, where everyone would be happy. It was a disaster. No one would accept the program.”

26. “Have you ever stood and stared at it? Marveled at its beauty, it’s genius. Billions of people, just living out their lives―oblivious.”

27. “You move to an area and you multiply and multiply until every natural resource is consumed and the only way you can survive is to spread to another area. There is another organism on this planet that follows the same pattern. Do you know what it is? A virus.”

29. “I’m going, to be honest with you. I hate this place, this zoo, this prison, this reality, whatever you want to call it. I can’t stand it any longer.”

31. “Every mammal on this planet instinctively develops a natural equilibrium with the surrounding environment, but you humans do not.”

34. “Our connection―I don’t fully understand how it happened, perhaps some part of you imprinted on to me, something overwritten or copied, but it is at this point irrelevant.”

35. “I’d like to share a revelation that I’ve had during my time here. It came to me when I tried to classify your species, and I realized that humans are not actually mammals.”

Iconic Agent Smith Quotes for You to Enjoy

42. “Lieutenant, you were given specific orders.”

43. “No lieutenant, your men are already dead.”

More Agent Smith Quotes That Reveal His Dark Side

47. “I killed you, Mr. Anderson, I watched you die; and with a certain satisfaction, I might add.”

Which of These Agent Smith Quotes Enticed You to Re-Watch The Matrix?

Smith was an artificial intelligence who belonged to a group of computer programs known as ‘Agents.’ He lives in the Matrix’s virtual world and has human characteristics. As an agent, he was tasked with protecting the Matrix from any potential threats, but he was kicked out of the system due to a series of events.

This turn of events convinced him that machines are more capable than humans. With this in mind, he decided to leave the Matrix and take over the real world. But, his greed and ambition didn’t materialize because Neo stopped him.

Whether you despise or admire Agent Smith, we can’t deny that machines and different artificial intelligence mechanisms are helping to shape the future. Having them in our lives isn’t a bad thing; it’s how we use them that can decide whether they’re harmful or not.

Which of these Agent Smith quotes is your favorite? Do you agree that machines are superior to humans? Please, let us know in the comments below!