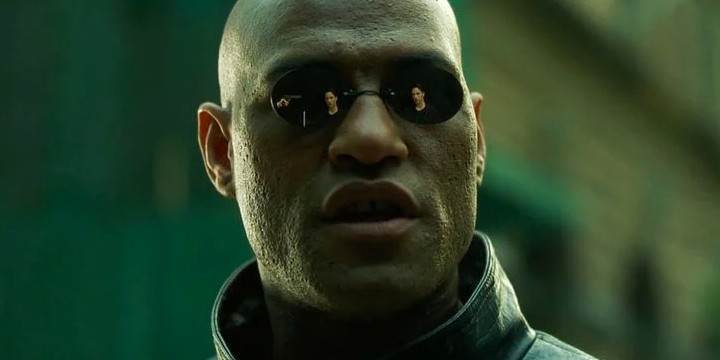 Whether you want to reflect on the road ahead or are simply a fan of The Matrix, these Morpheus quotes are for you!

Laurence Fishburne, who plays Morpheus in The Matrix movie series, is the captain of the Nebuchadnezzar. They guard Zion, the last human city. As a unit, their primary aspiration and goal are to liberate humanity from slavery and free them from the Matrix, just as Morpheus was able to do himself.

He sought the assistance of the One, a person with superhuman abilities within the Matrix who could end human suffering. He took all the risks and did not hesitate to give his own life to assist the One in saving humanity.

Morpheus demonstrates that he is a true leader who cares about his fellow men to the point of sacrificing his own life for their freedom. This is a rare trait that we should cultivate to become better leaders. If his determination in the movies inspired you, then read through these Morpheus quotes!

And don’t miss out these The Matrix quotes and Agent Smith quotes.

2. “This is your last chance. After this, there is no turning back. You take the blue pill—the story ends, you wake up in your bed and believe whatever you want to believe. You take the red pill—you stay in Wonderland and I show you how deep the rabbit-hole goes.”

3. “I’m trying to free your mind, Neo. But I can only show you the door. You’re the one that has to walk through it.”

5. “There are no accidents. We have not come here by chance. I do not believe in chance.”

6. “The body cannot live without the mind.”

7. “There is a difference between knowing the path and walking the path.”

8. “I don’t know what he can do to save us. But I do know that as long as there is a single breath left in his body he will not give up and neither can we.”

9. “Throughout human history, we have been dependent on machines to survive. Fate, it seems, is not without a sense of irony.”

13. “A sentinel for every man, woman, and child in Zion. That sounds exactly like the thinking of a machine to me.”

14. “You have the look of a man who accepts what he sees because he is expecting to wake up. Ironically, that’s not far from the truth.”

15. “Remember: all I’m offering is the truth, nothing more.”

Morpheus: “No, Neo. I’m trying to tell you that when you’re ready, you won’t have to.”

Morpheus Quotes From The Matrix

18. “As long as the Matrix exists, the human race will never be free.”

19. “Sentient programs. They can move in and out of any software still hardwired to their system. That means that anyone we haven’t unplugged is potentially an agent.”

20. “Unfortunately, no one can be told what the Matrix is. You have to see it for yourself.”

21. “The Matrix is a computer-generated dream world, built to keep us under control in order to change a human being into this.”

22. “We have survived by hiding from them, by running from them. But they are the gatekeepers. They are guarding all the doors; they are holding all the keys which means that sooner or later, someone is going to have to fight them.”

23. “You have to understand, most of these people are not ready to be unplugged. And many of them are so inert, so hopelessly dependent on the system that they will fight to protect it.”

24. “The Matrix is everywhere. It is all around us. Even now, in this very room. You can see it when you look out your window or when you turn on your television. You can feel it when you go to work—when you go to church—when you pay your taxes. It is the world that has been pulled over your eyes to blind you from the truth.”

Morpheus Quotes to Motivate You to Overcome Adversity

25. “I won’t lie to you, Neo. Every single man or woman who has stood their ground, everyone who has fought an Agent has died. But where they have failed, you will succeed.”

26. “Believe me when I say we have a difficult time ahead of us. But if we are to be prepared for it, we must first shed our fear of it.”

27. “Then tomorrow we may all be dead, but how would that be different from any other day? This is a war, and we are soldiers. Death can come for us at any time, in any place. Now consider the alternative. What if I am right? What if the prophecy is true? What if tomorrow the war could be over? Isn’t that worth fighting for? Isn’t that worth dying for?”

Deep Morpheus Quotes to Ponder On

28. “We don’t know who struck first, us or them. But we do know it was us that scorched the sky. At the time, they were dependent on solar power. It was believed they would be unable to survive without an energy source as abundant as the sun.”

30. “Do you believe that my being stronger or faster has anything to do with my muscles in this place? You think that’s air you’re breathing now?”

Morpheus Quotes That Will Bring You Back to Reality

31. “You’ve been living in a dream world, Neo. This is the world—as it exists today. Welcome to the desert of the real.”

33. “Have you ever had a dream, Neo, that you were so sure was real? What if you were unable to wake from that dream, Neo? How would you know the difference between the dream world and the real world?”

34. “If real is what you can feel, smell, taste, and see, then real is simply electrical signals interpreted by your brain.”

Morpheus: “Your mind makes it real.”

Iconic Morpheus Quotes for You to Enjoy

Morpheus: “You’ve never used them before.”

41. “You believe it’s the year 1999 when in fact it’s closer to 2199. I can’t tell you exactly what year it is because we honestly don’t know. There’s nothing I can say that will explain it for you, Neo.”

43. “I’ve seen an agent punch through a concrete wall. Men have emptied entire clips at them and hit nothing but air. Yet their strength and their speed are still based in a world that is built on rules. Because of that, they will never be as strong or as fast as you can be.”

44. “The pill you took is part of a trace program. It’s designed to disrupt your input-output carrier signal so we can pinpoint your location.”

45. “That you are a slave, Neo. Like everyone else, you were born into bondage. Into a prison that you cannot taste or see or touch. A prison for your mind.”

46. “You know, I know this steak doesn’t exist. I know that when I put it in my mouth, the Matrix is telling my brain that it is juicy and delicious. After nine years, you know what I realize? Ignorance is bliss.”

47. “I know exactly what you mean. Let me tell you why you’re here. You’re here because you know something. What you know you can’t explain, but you feel it. You’ve felt it your entire life, that there’s something wrong with the world. You don’t know what it is, but it’s there, like a splinter in your mind, driving you mad. It is this feeling that has brought you to me. Do you know what I’m talking about?”

48. “We have a rule: we never free a mind once it’s reached a certain age. It’s dangerous, the mind has trouble letting go. I’ve seen it before and I’m sorry. I did what I did because—I had to. When the Matrix was first built, there was a man born inside who had the ability to change whatever he wanted, to remake the Matrix as he saw fit. It was he who freed the first of us, taught us the truth.”

49. Commander Lock: “Dammit, Morpheus. Not everyone believes what you believe.”

Morpheus: “My beliefs do not require them to.”

Morpheus: “No. But if you could, would you really want to?”

Did These Morpheus Quotes Open Your Eyes to Reality?

Each of us has our path to follow in life. We have a mission and a journey to complete, regardless of the obstacles and impediments that may arise. However, some things in life appear to control us and cause us to lose sight of our true purpose in life.

We may feel that we are simply living our lives according to a set of dogmas and rules that cause us to lose sight of reality. It may appear that we do things out of our free will on the surface. But do you want to do these things, or is it because someone else wants you to?

These Morpheus quotes serve as a guide to help us break the cycle and regain complete control of our lives. Let us not let others rule our world; instead, dare to be your own boss and your own self.

Did these quotes give you the confidence to decide on your own? Please, let us know in the comments section below.