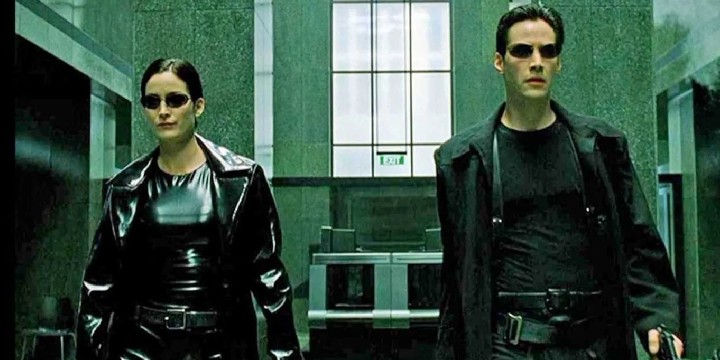 If you like science fiction, here are some The Matrix quotes that will make you think about the world differently.

The Matrix movies are widely regarded as one of the best sci-fi movies of all time. Ordinary viewers became avid fans because of its jaw-dropping cinematography and, of course, Keanu Reeves’ role.

The movie franchise’s plot revolves around the discovery of the Matrix, a networked computer system powered by human brains. The body, brain, and mind must work together to stay awake in this world.

More than the sci-fi aspect, The Matrix also dives into some philosophical topics like freedom, choice, willpower, and more.

So, if you haven’t watched any of the movies yet, take a look at our selection below. Don’t miss out on the franchise’s best and most insightful lines!

And make sure to check out these Morpheus quotes and Agent Smith quotes.

1. “Hope. It is the quintessential human delusion, simultaneously the source of your greatest strength and your greatest weakness.” – The Architect

2. “Choice is an illusion created between those with power and those without.” – Merovingian

3. “The only way you can survive is to spread to another area. There is another organism on this planet that follows the same pattern. Do you know what it is? A virus. Human beings are a disease, cancer of this planet.” – Agent Smith

4. “To deny our own impulses is to deny the very thing that makes us human.” – Mouse

5. “The Matrix is everywhere. It is all around us. It is the world that has been pulled over your eyes to blind you from the truth. A prison for your mind.” – Morpheus

7. “That’s how it is with people. Nobody cares how it works as long as it works.” – Councilor Hamann

8. “There’s no escaping reason, no denying purpose. Because as we both know, without purpose, we would not exist.” – Agent Smith

9. “I’ll show these people what you don’t want them to see. A world without rules and controls, without borders or boundaries. A world where anything is possible. Where we go from there is a choice I leave to you.” – Neo

10. “Throughout human history, we have been dependent on machines to survive. Fate, it seems, is not without a sense of irony.” – Morpheus

11. “Everything that has a beginning has an end. I see the end coming. I see the darkness spreading. I see death. And you are all that stands in his way.” – The Oracle

12. “Remember, all I’m offering is the truth. Nothing more.” – Morpheus

13. “I know what you’re thinking, ’cause right now I’m thinking the same thing. Actually, I’ve been thinking about it ever since I got here: why oh why didn’t I take the blue pill?” – Cypher

15. “You have a problem with authority, Mr. Anderson. You believe you are special, that somehow, the rules do not apply to you. Obviously, you are mistaken.” – Rinehart

17. “One way or another, Neo, this war is going to end. Tonight, the future of both worlds will be in your hands—or in his.” – The Oracle

18. “I’m trying to free your mind, Neo. But I can only show you the door. You’re the one that has to walk through it.” – Morpheus

19. “This is your last chance. After this, there is no turning back. You take the blue pill—the story ends, you wake up in your bed and believe whatever you want to believe. You take the red pill—you stay in Wonderland and I show you how deep the rabbit hole goes.” – Morpheus

20. “What’s really going to bake your noodle later on is, would you still have broken it if I hadn’t said anything?” – The Oracle

21. “Denial is the most predictable of all human responses.” – The Architect

The Matrix Quotes From Morpheus That Are Incredibly Wise

22. “Let me tell you why you’re here. You are here because you know something. What you know, you can’t explain. But you feel it. You’ve felt it your entire life.” – Morpheus

23. “The body cannot live without the mind.” – Morpheus

24. “That’s right, I am. But we all well know that the reason that most of us are here is because of our—affinity for disobedience.” – Morpheus

25. “What happened, happened and couldn’t have happened any other way.” – Morpheus

26. “You have to understand, most people are not ready to be unplugged.” – Morpheus

27. “What is ‘real’? How do you define ‘real?’ If you’re talking about what you can feel, what you can smell, taste, and see then ‘real’ is simply electrical signals interpreted by your brain.” – Morpheus

29. “Neo, sooner or later you’re going to realize just as I did that there’s a difference between knowing the path and walking the path.” – Morpheus

32. “I don’t know what he can do to save us. But I do know that as long as there is a single breath left in his body, he will not give up and neither can we.” – Morpheus

33. “What are you waiting for? You’re faster than this. Don’t think you are, know you are. Come on. Stop trying to hit me and hit me.” – Morpheus

34. “Nobody can be told what the Matrix is, you have to see it for yourself.” – Morpheus

The Matrix Quotes From Neo to Make You Think

36. “You ever have that feeling where you’re not sure if you’re awake or still dreaming?” – Neo

40. “There are only two possible explanations: either no one told me, or no one knows.” – Neo

42. “Some people go their entire lives without hearing news that good.” – Neo

The Matrix Quotes From Trinity

44. “Touch me and that hand will never touch anything again.” – Trinity

45. “I believe that Morpheus means more to me than he does to you. I believe if you are really serious about rescuing him, you are going to need my help.” – Trinity

48. “Neo, Morpheus sacrificed himself so we could get you out. There is no way you’re going back in.” – Trinity

49. “I know why you’re here, Neo. I know what you’ve been doing—why you hardly sleep, why you live alone, and why night after night, you sit by your computer. You’re looking for him.” – Trinity

The Matrix Quotes to Help You See the Beauty of Love

53. “Neo, I’m not afraid anymore. The Oracle told me that I would fall in love and that that man—the man that I loved would be ‘the one.’ So you see, you can’t be dead. You can’t be—because I love you. You hear me? I love you.” – Trinity

54. “I wanna tell you a little secret, being the one is just like being in love. No one needs to tell you you are in love, you just know it, through and through.” – The Oracle

Short The Matrix Quotes That’ll Remain in Our Minds

More The Matrix Quotes for Fans of the Movies

62. “A sentinel for every man, woman, and child in Zion. That sounds exactly like the thinking of a machine to me.” – Morpheus

63. “You are here because Zion is about to be destroyed. It’s every living inhabitant terminated, its entire existence eradicated.” – The Architect

64. “I’d like to share a revelation that I’ve had during my time here. It came to me when I tried to classify your species and I realized that you’re not actually mammals. Every mammal on this planet instinctively develops a natural equilibrium with the surrounding environment but you humans do not.” – Agent Smith

65. “A déjà vu is usually a glitch in the Matrix. It happens when they change something.” – Trinity

66. “You hear that Mr. Anderson? That is the sound of inevitability!” – Agent Smith

67. “Zion, hear me! It is true, what many of you have heard. The machines have gathered an army and as I speak, that army is drawing nearer to our home.” – Morpheus

68. “Did you know that the first Matrix was designed to be a perfect human world? Where none suffered, where everyone would be happy. It was a disaster. No one would accept the program. Entire crops were lost. Some believed we lacked the programming language to describe your perfect world. But I believe that, as a species, human beings define their reality through suffering and misery. The perfect world was a dream that your primitive cerebrum kept trying to wake up from.” – Agent Smith

69. “There’s something wrong with the world. You don’t know what, but it’s there. Like a splinter in your mind.” – Morpheus

70. “Look past the flesh. Look through the soft gelatin of these dull cow eyes and see your enemy!” – Bane

Did Our Collection Influence Your Understanding of Reality and Truth?

The Matrix movies are packed with groundbreaking action sequences and philosophical messages. They deal with the truth and reality of the world and everything in between.

Like the inhabitants of The Matrix, we live in a created reality. The main distinction is that in the movies, machines create reality.

In real life, our reality is something we make in our lives. We create our responses, experiences, realities, and our own lives based on our beliefs about the world and ourselves.

Through The Matrix, we learn that we can create new realities if we choose to see the truth. Our outer state reflects our inner state. So, the more we let go of our egos and understand inner truths, the more we can achieve outwardly.

We hope this collection was able to inspire you to step outside of your comfort zone and face the pain that sometimes comes with new growth. Choose to move forward and choose to live the life you deserve!

Have you watched any of The Matrix movies? What did you learn from today’s list? Join the discussion below.