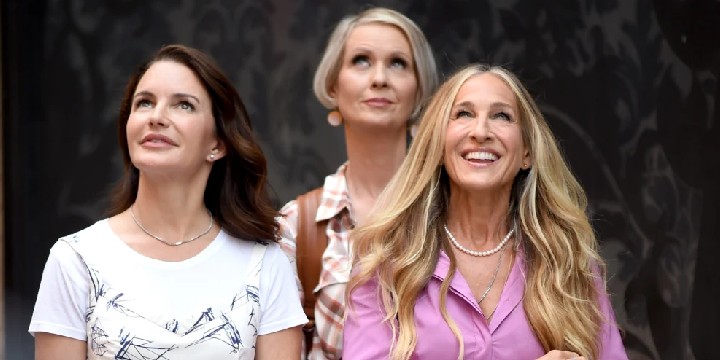 These And Just Like That quotes will help you see the world from a new perspective and inspire you to push against the complicated things in life!

And Just Like That is an American comedy-drama television series created by Michael Patrick King. This series is a revival and a sequel of the HBO television series, Sex and the City, by Darren Star.

The plot centers around three best friends, Carrie, Miranda, and Charlotte. They are all in their mid-50s and are trying to figure out what life has in store for them. However, they all worried that their lives would be more complicated than before.

This leads to a series of dramatic scenes that will strain their friendship. And Just Like That is definitely worth watching, and reading its best quotes is a great way to start. So, whether you’re a die-hard fan or just want to revisit your favorite scenes, check out this list of memorable quotes below!

And don’t miss out these Sex and the City quotes.

1. “Do I look like someone who attaches any significance to hair? I let mine go gray, and I don’t care that it makes me look old.” – Miranda Hobbes

2. “I love that your v*gina is getting airtime.” – Carrie Bradshaw

5. Charlotte York Goldenblatt: “What is wrong with people just staying who they were?”

Carrie Bradshaw: “Some of us don’t have that luxury.”

7. “The more I live, the more I find that if you have good friends in your corner, anything’s possible.” – Carrie Bradshaw

8. Carrie Bradshaw: “Remember when we had to legally stand 6 feet apart from one another?” Miranda Hobbes: “Yeah. I miss that.”

9. “Are you sure? Because alone, in theory, is very different than alone in reality.” – Carrie Bradshaw

11. “I will never be the woman with the perfect hair, who can wear white and not spill on it.” – Carrie Bradshaw

And Just Like That Quotes That’ll Make You Think Twice

15. “What’s the lifespan of an unanswered text?” – Miranda Hobbes

16. “My family loves me. They are all love and acceptance.” – Carrie Bradshaw

Miranda Hobbes: “That is the most desperate put-down I have ever heard.”

21. “I am Che, your host and queer, nonbinary, Mexican Irish diva representing everyone else outside these two boring genders.” – Che Diaz

23. “Please do not call our relationship improv. I suck at improv.” – Che Diaz

26. Mr. Big: “I remember when you kept your sweaters on the stove.”

Carrie Bradshaw: “I remember when your hair was black.”

Carrie Bradshaw: “I’d have to know you a lot longer before I confessed to that.”

29. “Look, I understand that she was upset, but I thought I was more to her than an ATM.” – Carrie

30. Miranda Hobbes: “What happened between you two?”

Carrie Bradshaw: “I have no idea. I was hoping you did.”

Did This Collection Better Equip You to Face Life’s Challenges?

Life at 50 is not always easy. While aging, many of us find ourselves in a new phase of life that is different from what we’re used to.

However, the good thing about our favorite characters is that they face struggles with humor and grace. Some of us can’t do that because many people are overwhelmed by the changes they get to go through during this time. That’s why a series like this is good to watch for us to learn how to cope with the realities of life.

By watching And Just Like That, we get insights on adapting to uncertain and unforeseeable situations. We can use Carrie, Charlotte, and Miranda’s mindsets as a motivation to keep fighting no matter how difficult the circumstances.

Hopefully, these And Just Like That quotes were able to give you a new perspective on life. Always remember that no matter what happens, we can always turn our lives around if we keep trying.