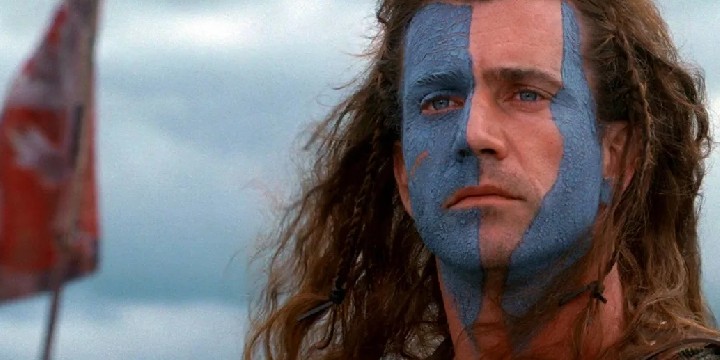 Conquer your battles and persevere in life with these Braveheart quotes.

Braveheart is a 1995 film about the First War of Scottish Independence. It was inspired by The Wallace, an epic poem on the story of William Wallace.

The film was known as one of the most significant historical films ever. It also won many awards and honors for its portrayal of the resistance. Learn about the brave and inspiring leader, William Wallace, by reading the entire collection below.

And don’t forget to check out these Gladiator quotes and Kingdom of Heaven quotes.

3. “Your heart is free. Have the courage to follow it.” – Malcolm Wallace

5. “This Wallace, he doesn’t even have a knighthood, but he fights with passion, and he inspires.” – Robert the Bruce

6. “Never in my whole life did I swear allegiance to him.” – William Wallace

7. “Fight, and you may die. Run, and you’ll live at least a while, and dying in your beds, many years from now, would you be willing to trade all the days, from this day to that, for one chance, just one chance, to come back here and tell our enemies that they may take our lives, but they’ll never take our freedom!” – William Wallace

8. “Give me the strength to die well.” – William Wallace

9. “I want a wife and children and grow crops, but it’s all for nothing if you don’t have freedom.” – William Wallace

10. “There’s a difference between us. You think the people of this country exist to provide you with position. I think your position exists to provide those people with freedom, and I go to make sure that they have it.” – William Wallace

11. “I have been given nothing. God makes men what they are.” – William Wallace

12. “I am William Wallace! And I see a whole army of my countrymen, here, in defiance of tyranny. You’ve come to fight as free men, and free men you are. What will you do with that freedom? Will you fight?” – William Wallace

13. “You see? Death comes to us all, but before it comes to you, know this, your blood dies with you. A child who is not of your line grows in my belly. Your son will not sit long on the throne. I swear it.” – Princess Isabella of France

Braveheart Quotes That Will Inspire You to Fight

16. “Now is our chance. Now, if we join, we can win. If we win, well then we’ll have what none of us has ever had before, a country of our own.” – William Wallace

17. “Every nobleman who had the will to fight was at that meeting. We can not beat an army.” – Murron MacClannough

18. “Truth is truth even when told by a liar.” – William Wallace

19. “They may take away our lives, but they’ll never take our freedom!” – William Wallace

20. “I came back home to raise crops, and God willing, a family. If I can live in peace, I will.” – William Wallace

22. “Just when we thought all hope was lost, our noble saviors have arrived.” – Stephen of Ireland

25. “I’ve lived long enough to live free and proud to see you become the man that you are. I’m a happy man.” – Campbell

27. “You have bled with Wallace, now bleed with me.” – Robert the Bruce

28. “Every man dies, not every man really lives.” – William Wallace

29. “Now, I know you’ve sacrificed much. But fighting these odds looks like rage, not courage.” – Robert the Bruce

30. “And the common man, who bleeds on the battlefield, does he risk less?” – William Wallace

Braveheart Quotes to Give You Courage

31. “What does that mean to be noble? Your title gives you claim to the throne of our country, but men don’t follow titles. They follow courage.” – William Wallace

32. “I shall tell you of William Wallace. Historians from England will say I am a liar, but history is written by those who have hanged heroes.” – Robert the Bruce

33. “Go back to England and tell them there that Scotland’s daughters and sons are yours no more. Tell them Scotland is free.” – William Wallace

35. “I will invade England and defeat the English on their own ground.” – William Wallace

37. “I’m the one that’s rotting, but your face looks graver than mine.” – Robert’s Father

39. “You did not want your father to die either, but it happened.” – Argyle Wallace

41. William Wallace: “A lordship and titles. Gold. That I should become Judas?”

Princess Isabella of France: “Peace is made in such ways.”

William Wallace: “Slaves are made in such ways.”

42. “Yes, I’ve heard. Kills men by the hundreds, and if he were here, he’d consume the English with fireballs from his eyes and bolts of lightning from his arse.” – William Wallace

43. “She was my wife. We married in secret because I would not share her with an English Lord. They killed her to get to me. I’ve never spoken of it. I don’t know why I tell you now, except I see her strength in you. One day, you’ll be a queen, and you must open your eyes. You tell your king that William Wallace will not be ruled, and nor will any Scot while I live.” – William Wallace

46. “In the year of our Lord 1314, patriots of Scotland, starving and outnumbered, charged the fields of Bannockburn. They fought like warrior poets. They fought like Scotsmen, and they won their freedom. Forever!” – William Wallace

47. “Forgive me, sire. I thought that generosity might demonstrate your greatness to those you mean to rule.” – Princess Isabella of France

48. “I have nothing. Men fight for me because if they do not, I throw them off my land, and I starve their wives and their children. Those men who bled the ground red at Falkirk, they fought for William Wallace, and he fights for something that I never had, and I took it from him when I betrayed him. I saw it in his face on the battlefield, and it’s tearing me apart.” – Robert the Bruce

49. “Who is this person that speaks to me as though I needed his advice?” – King Edward I

51. “The trouble with Scotland is that it’s full of Scots.” – King Edward I

52. “What in the hell are the Irish doing fighting with the English?” – Hamish

54. “Lower your flags and march straight back to England, stopping at every home you pass by to beg forgiveness for a hundred years of theft, rape, and murder. Do that, and your men shall live. Do it not, and every one of you will die today.” – William Wallace

56. “I respect what you said, but remember that these men have lands and castles. It’s much to risk.” – Robert the Bruce

57. “I hope you washed your ass this morning. It’s about to be kissed by a king.” – English Commander

58. “The king will be dead in a month, and his son is a weakling. Who do you think is going to rule this kingdom?” – Princess Isabella of France

60. “Of course, running a farm is a lot of work, but that will all change when my sons arrive.” – William Wallace

Braveheart Quotes on Freedom and Death

62. “The answer is yes. Fight for me. You get to kill the English.” – William Wallace

William Wallace: “Against whom?”

Royal Magistrate: “Against your king.”

64. “Not the archers. My scouts tell me their archers are miles away and no threat to us. Arrows cost money. Use up the Irish. The dead cost nothing.” – King Edward I

65. “Longshanks acquired Wallace, so did our nobles. That was the price of your crown.” – Robert’s Father

67. “Whom do I send? Not my gentle son. The mere sight of him would only encourage an enemy to take over the whole country.” – King Edward I

69. “I heard word in France where I was fighting to expand your future kingdom. The word, my son, is that our entire northern army is annihilated.” – King Edward I

71. “The prisoner wishes to say a word.” – Royal Magistrate

72. “The Almighty says this must be a fashionable fight. It’s drawn the finest people.” – Stephen of Ireland

73. “Oh, it’s good Scottish weather, madam. The rain is falling straight down. Well, slightly to the side like.” – William Wallace

74. “He declares it to me, I swear it. He proposes that you withdraw your attack. In return, he grants you title, estates, and this chest of gold which I am to pay to you personally.” – Princess Isabella of France

Braveheart Quotes and Conversations That Are Full of Love

Princess Isabella of France: “Because of the way you are looking at me now.”

79. Murron MacClannough: “So, you’ve got children?”

William Wallace: “Not yet, but I was hoping you could help me with that.”

80. William Wallace: “I will love you my whole life. You and no other.”

Murron MacClannough: “And I, you. You and no other forever.”

Action-Packed Braveheart Quotes to Get Your Heart Pounding

81. “Sure, didn’t the Almighty send me to watch your back? I didn’t like him anyway. He wasn’t right in the head.” – Stephen of Ireland

84. “I understand you have recently been given the rank of knight.” – Princess Isabella of France

85. “Before we let you leave, your commander must cross that field, present himself before this army, put his head between his legs, and kiss his own arse.” – William Wallace

88. “When the king returns, he will bury them in those new clothes. Scotland is in chaos. Your husband is secretly sending an army north.” – Nicolette

89. “For presenting yourselves on this battlefield, I give you thanks.” – William Wallace

90. “You be ready and do exactly as I say. On my signal, ride round behind our position and flank them.” – William Wallace

Did William Wallace Inspire You to Be Strong and Brave?

Braveheart is a film that will never run out of life lessons. It is a story of being tough and growing towards achieving freedom.

Wallace was able to mobilize people to resist King Edward with his passion and love. Moreover, no matter how many problems arise in reaching his goals, he never gave up. He is a constant reminder to be compassionate and tenacious while working for your dreams.

William Wallace proved that if he can overcome the difficult things in life, you can too. So go and continue persevering to reach your dreams in life!

Which Braveheart quote is your favorite? Do you have more quotes to add to the collection? Comment down your thoughts below!