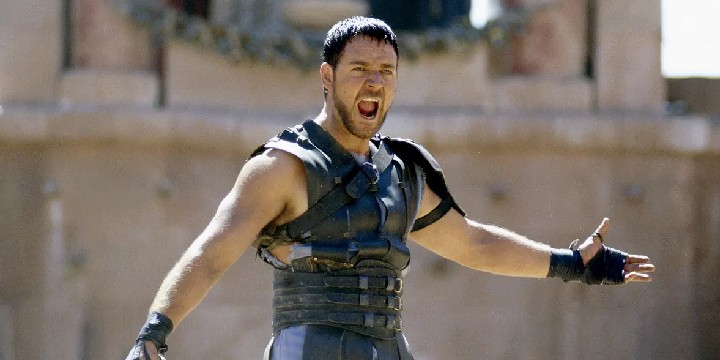 Whether you’re a fan of the movie or not, we’re sure these Gladiator quotes will motivate you and give you the strength to persevere in the face of adversity.

Gladiator is a movie that premiered in June 2000. It depicts a battle for the succession of the throne in Rome. Emperor Aurelius urged Maximus to succeed him, but his son’s greed betrayed his trust.

This film shows how determination and perseverance prevail in times of trial. Life will not give us challenges that we can’t overcome.

Check these quotes that’ll remind you of epic battle scenes while teaching you a thing or two about life at the same time!

And don’t miss out these Braveheart quotes and Kingdom of Heaven quotes.

1. “Brothers, what we do in life echoes in eternity.” – Maximus

4. “You know dirt cleans off a lot easier than blood, Quintus.” – Maximus

5. “Nothing happens to anyone that he is not fitted by nature to bear.” – Maximus

6. “Death smiles on us all. All a man can do is smile back.” – Marcus Aurelius

8. “Ancestors, I honor you and will try to live with the dignity that you have taught me.” – Maximus

9. “He enters Rome like a conquering hero. But what has he conquered?” – Commodus

10. “Three weeks from now, I will be harvesting my crops. Imagine where you will be, and it will be so.” – Maximus

11. “I’ve seen much of the rest of the world. It is brutal and cruel and dark, Rome is the light.” – Maximus

12. “Commodus, your faults as a son is my failure as a father.” – Marcus Aurelius

13. “Today I saw a slave become more powerful than the emperor of Rome.” – Lucilla

15. “Whatever comes out of these gates, we’ve got a better chance of survival if we work together. Do you understand? If we stay together, we survive.” – Maximus

19. “When a man sees his end, he wants to know there was some purpose to his life. How will the world speak my name in years to come? Will I be known as the philosopher? The warrior? The tyrant? Or will I be the emperor who gave Rome back her true self?” – Marcus Aurelius

21. “Ultimately, we are all dead men. Sadly we cannot choose how but we can decide how we meet that end in order that we are remembered as men.” – Proximo

24. “And the great wh*re will suckle us until we are fat and happy and can suckle no more.” – Proximo

26. “Is Rome worth one good man’s life? We believed it once. Make us believe it again. He was a soldier of Rome. Honor him.” – Lucilla

28. “There was once a dream that was Rome. You could only whisper it. Anything more than a whisper and it would vanish, it was so fragile.” – Marcus Aurelius

30. “My name is Maximus Decimus Meridius, commander of the Armies of the North, General of the Felix Legions, and loyal servant to the true emperor, Marcus Aurelius. Father to a murdered son, husband to a murdered wife. And I will have my vengeance, in this life or the next.” – Maximus

31. “Anyone can train to be a gladiator. What marks you out is having the mindset of a champion.” – Manu Bennett

32. “You have proven your valor once again, Maximus. Let us hope for the last time.” – Marcus Aurelius

34. “The time for honoring yourself will soon be at an end. Highness.” – Maximus

35. “To my son―I tell him I will see him again soon. To keep his heels down while riding his horse. To my wife―that is not your business.” – Maximus

36. “Yes, you can help me. Forget you ever knew me, and never come back here again.” – Maximus

37. “Five thousand of my men are out there in the freezing mud. Three thousand of them are bloodied and cleaved. Two thousand will never leave this place. I will not believe they fought and died for nothing.” – Maximus

40. “The frost―sometimes it makes the blade stick.” – Maximus

43. “Your Emperor asks for your loyalty, Maximus. Take my hand, I only offer it once.” – Commodus

44. “How dare you show your back to me! Slave, you will remove your helmet and tell me your name.” – Commodus

45. “Your fame is well deserved, Spaniard. I don’t think there’s ever been a gladiator to match you. As for this young man, he insists you are Hector reborn. Or was it Hercules? Why doesn’t the hero reveal himself and tell us all your real name? You do have a name.” – Commodus

47. “Save the bulls. Honor Maximus. He won the battle.” – Marcus Aurelius

49. “I want you to become the protector of Rome after I die. I will empower you to one end alone, to give power back to the people of Rome and end the corruption that has crippled it. Do you accept this great honor that I have offered you?” – Marcus Aurelius

50. “Quintus, look at me, look at me! Promise me that you will look after my family.” – Maximus

Which of These Gladiator Quotes Brought Out Your Fighting Spirit?

The epic action film, Gladiator, was released in 2000. It told the story of the Roman soldier who lost everything and came back as a gladiator seeking revenge for his family’s murder.

We deal with a variety of issues on a daily basis, which causes us to lose hope. That is why, to survive any life hardships, keep your faith and never give up. Put on your armor and defeat all life’s challenges.

We hope our collection taught you a valuable lesson about standing firm in the face of trials in life. Remember these Gladiator quotes to give you the courage to pursue your goals and never give up.

Which Gladiator quotes resonated with you the most? Leave your thoughts in the comments section below.