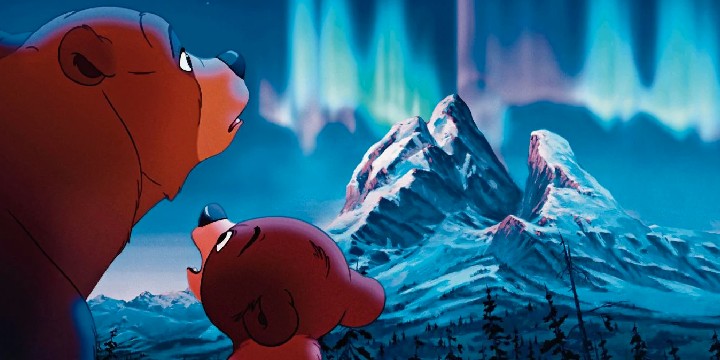 Brother Bear is one of the most underrated Disney animated movies ever released. While some still remember parts of the movie here and there, many don’t recognize the profound lessons it imparts.

It all starts when Kenai, a human, gets turned into a bear by the Spirits so they can teach him a lesson. While trying to figure out a way to turn back, he meets Koda, a young cub. Traveling together, Kenai and Koda formed a brotherly bond through love and mutual understanding.

Due to an unfortunate turn of events, Kenai found out he was the one who killed Koda’s brother. However, instead of hiding it from Koda, he came clean about it. On the flip side, instead of hating Kenai for what he did, Koda forgave him without hesitation.

Brother Bear is undoubtedly a wholesome movie that will teach kids—and adults—lots of lessons. To get your hands on them, read through to the end!

And don’t forget to check out these The Aristocats quotes and Barbie quotes.

1. “Love is the most precious of totems. It reveals itself in unexpected ways.” – Tanana

2. “Bonehead, just because his totem is wisdom doesn’t mean he’s wise. I mean, look at him.” – Sitka

Denahi: “I’m trying to follow my totem. Why can’t you do the same?”

Kenai: “You really think love has anything to do with being a man? A man wouldn’t just sit here and do nothing.”

4. “Let love guide your actions, and one day, you’ll be a man and will place your mark next to those of our ancestors.” – Tanana

5. “When each of us comes of age, the Great Spirits reveal to us a totem that helps guide us through our lives. Some of us use courage to guide us, others patience. And some of us, beauty.” – Tanana

6. Koda: “Mom says the Spirits make all the magical changes in the world, like how the leaves change color, or how the moon changes shape or tadpoles change into frogs—.”

Kenai: “Yeah, I get it. You know, for a change, maybe they could just leave things alone.”

Koda: “You have a brother up there? What happened to him?”

Kenai: “He was killed by a bea—by a monster.”

Koda: “Thanks, Sitka. If it weren’t for you, I would have never met Kenai. I always wanted a brother.”

7. Tanana: “Kenai, I have been to the mountain where the lights touch the earth, and the Great Spirits have revealed to me your totem. To become a man, your actions must be guided by one thing: Your totem is love. Yes, love.”

Tanana: “A love that connects and unites all living things.”

Denahi: “It’s alright, Kenai. No matter what you choose, you’ll always be my little brother.”

9. “The world is full of magic. Small things become big. Winter turns to spring. One thing always changes into another.” – Denahi

11. “My eyes were watering, and my tongue was swollen, and from that moment on, I was more careful about what I licked!” – Koda

16. Kenai: “Enough with the stories. I don’t care about the time you and Binky found the world’s biggest pine cone ever.”

Koda: “First of all, his name’s Bucky, not Binky. And second, it wasn’t a pine cone, it was a pine nut, and it was huge, even bigger than your fat head.”

19. Rutt: “Sorry! You’ve been replaced with my dear brother. Gee, I forgot your name; what’s your name again?”

20. Kenai: “Koda, there’s something I ought to—you know that story you told me last night?”

Kenai: “We’re going after the bear.”

Denahi: “I know what you’re feeling, but—but killing that bear is wrong.”

Kenai: “Wrong? Our brother is dead, and it’s because of that monster.”

22. “You want to know what I did this year? I went on the longest, hardest, most exhausting journey I have ever been on, with the biggest pain in the neck I have ever met. But what do you expect from a little brother?” – Kenai

More Brother Bear Quotes for Those Who Miss This Awesome Movie

Kenai: “So you know how they are! They’re—they’re killers.”

Kenai: “Well, obviously not all bears, I mean, you’re okay, but most bears—most bears will look for any excuse to attack a human.”

Koda: “But Kenai, he attacked us!”

24. Rutt: “Hey, you know what this calls for? A pile of delicious barley and amber wheat on a cool bed of malted hops, eh?”

25. Kenai: “I was transformed into a bear—magically. I was lifted into the sky by my brother.”

Tuke: “Whoever said you were? We understand.”

Tuke: “Give him some room.”

Kenai: “Why am I even talking to a couple of dumb moose?”

How Would You React if You Experienced the Same Thing as Kenai or Koda?

In Brother Bear, Kenai is consumed by revenge when his brother is killed. He prioritized killing the bear that killed his brother, and he was successful in that regard.

Unknowingly, what he did made others suffer, especially Koda. When Kenai came clean to him about what he did, Koda unexpectedly accepted him with grace. Usually, when we’re told something that’ll hurt us to the degree Kenai did Koda, we would get mad, throw a fit, and even hate the other person forever.

However, for Koda, Kenai was family, and family meant forgiveness. Koda loved Kenai like his own brother and was willing to forgive him for his mistakes. In the same way, Kenai was honest with Koda even though he knew he could destroy their brotherly bond forever.

Honesty and forgiveness are indeed integral to love and family. Be inspired by Kenai and Koda’s journey, and use their experiences as a guide in life!