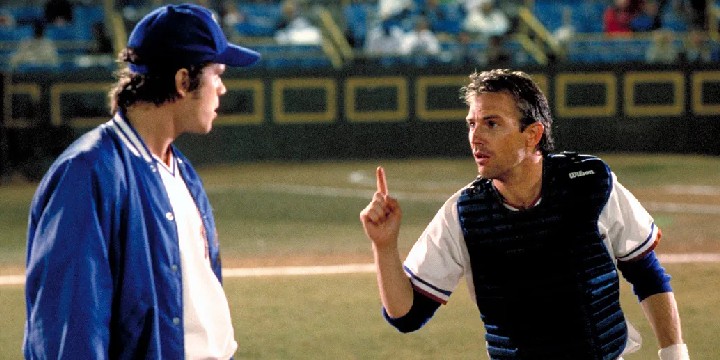 We’ve gathered these Bull Durham quotes to give you entertainment and life advice at the same time.

Bull Durham is a movie that you will not get tired of watching again and again. It’s not your typical drama movie because it’s a bit more relaxed and easygoing. Whether you’re a fan of baseball or not, you’ll be able to relate to the messages and words of wisdom embedded in the film’s plot.

We’re sure you’ll enjoy this collection as much as we did! Entertain yourself with these iconic lines and quotes we’ve prepared for you.

And make sure to read these Field of Dreams quotes and baseball quotes.

3. “You just got lesson number one—don’t think, it can only hurt the ball club.” – Crash Davis

4. “The world is made for people who aren’t cursed with self-awareness.” – Annie Savoy

6. “These are the ground rules. I hook up with one guy a season. Usually takes me a couple weeks to pick the guy, kinda my own spring training.” – Annie Savoy

7. “When you get in a fight with a drunk you don’t hit him with your pitching hand.” – Crash Davis

9. “Don’t take this the wrong way Millie, but if I catch you here again I’ll ban you from the ballpark.” – Skip

10. “Well, actually, nobody on this planet ever really chooses each other. I mean, it’s all a question of quantum physics, molecular attraction, and timing. Why, there are laws we don’t understand that bring us together and tear us apart. Uh, it’s like pheromones. You get three ants together.” – Annie Savoy

11. “Well, I believe in the soul, the c*ck, the p*ss*, the small of a woman’s back, the hanging curveball, high fiber, good scotch, that the novels of Susan Sontag are self-indulgent, overrated crap.” – Crash Davis

13. “Baseball may be a religion full of magic, cosmic truth, and the fundamental ontological riddles of our time, but it’s also a job.” – Annie Savoy

14. “You be arrogant, even when you’re getting beat. That’s the secret. You gotta play this game with fear and arrogance.” – Crash Davis

15. “I’m just happy to be here. Hope I can help the ball club. I know. Write it down. I just want to give it my best shot, and the good Lord will be willing, things will work out.” – Crash Davis

18. “Honey, you are a regular nuclear meltdown. You better cool off.” – Annie Savoy

20. “I was in the show for 21 days once. Twenty-one greatest days of my life. You know you never handle your luggage in the show? Someone else carries your bags. It’s great. You hit white balls for batting practice. Ballparks are like cathedrals.” – Crash Davis

21. “Throw it! You know you’re not gonna hit me, cause you’ve already started to think about it, eh? Thinkin’ about how embarrassing it would be to miss in front of all these people, how somebody might laugh? Come on.” – Crash Davis

22. “After 12 years in the minor leagues, I don’t try out. Besides, uh, I don’t believe in quantum physics when it comes to matters of the heart.” – Crash Davis

23. “Why’s he calling me meat? I’m the one driving a Porsche.” – Ebby Calvin LaLoosh

27. “Walt Whitman once said, ‘I see great things in Baseball. It’s our game, the American game. It will repair our losses and be a blessing to us.’” – Annie Savoy

29. “I told him that a player on a streak has to respect the streak.” – Crash Davis

Also read: Major League Quotes, A League of Their Own Quotes

31. “Another new league record! In addition, he hit the sportswriter, the public address announcer, the bull mascot twice.” – Larry Hockett

32. “I love winning, man! I f*ck*ng love winning! You know what I’m saying? It’s, like, better than losing. Teach me something new, man. I need to learn.” – Ebby Calvin LaLoosh

33. “Despite my rejection of most Judeo-Christian ethics, I am, within the framework of the baseball season, monogamous.” – Annie Savoy

34. “Candlesticks always make a nice gift, and uh, maybe you could find out where she’s registered and maybe a place-setting or maybe a silverware pattern. Okay, let’s get two! Go get ‘em.” – Larry

35. “Had a gun on him tonight. The last five pitches he threw were faster than the first five. He has the best young arm I’ve seen in 30 years. You’ve been around. You’re smart, professional. We want you to mature the kid. We want you to room with him on the road, stay on his case all year. He could go all the way.” – Joe Reardon

37. “I’ve tried ‘em all. The only church that truly feeds the soul, day in and day out, is the Church of Baseball.” – Annie Savoy

38. “I didn’t get lured and I will take responsibility for my actions.” – Millie

39. “I gave Jesus a chance. But it just didn’t work out between us. The Lord laid too much guilt on me. I prefer metaphysics to theology. You see, there’s no guilt in baseball, and it’s never boring.” – Annie Savoy

40. “How come in former lifetimes, everybody is somebody famous?” – Crash Davis

41. “Listen, sweetheart, you shouldn’t listen to what a woman says when she’s in the throes of passion. They say the darndest things.” – Annie Savoy

42. “You know, just because sometimes you manage to be clever and you have a nice smile does not mean you are not full of sh*t.” – Annie Savoy

44. “I believe in the Church of Baseball. I’ve tried all the major religions and most of the minor ones. But bad trades are part of baseball—now who can forget Frank Robinson for Milt Pappas, for God’s sake? It’s a long season and you gotta trust it. I really have.” – Annie Savoy

46. “I want to bring the heater. Announce my presence with authority.” – Ebby Calvin LaLoosh

48. “Show us that million-dollar arm, because I got a good idea about that five-cent head of yours.” – Crash Davis

49. “You get a dying quail, just one more dying quail a week and you’re in Yankee Stadium.” – Crash Davis

50. “You are—you’re exotic, and mysterious, and cute, and that’s why I’d better leave.” – Annie Savoy

51. “I got a Porsche already. I got a 911 with a quadraphonic Blaupunkt.” – Ebby Calvin LaLoosh

53. “So, we fight and she gets the clown? How does that work?” – Ebby Calvin LaLoosh

55. “Well if anyone would know you were pulling your hips out early it’d be Annie.” – Larry

57. “You can let the fungus grow back on your shower shoes and the press will think you’re colorful.” – Crash Davis

59. “Man that ball got outta here in a hurry. I mean anything travels that far oughta have a damn stewardess on it, don’t you think?” – Crash Davis

Bull Durham Quotes on Being on the Field

61. “You ain’t getting that cheese from me, meat. Look for the fastball up. He’s gotta come with the cheese. Relax. Relax. Quick bat.” – Crash Davis

62. “You’re gonna show up my pitcher after I gave you a gift, run dummy!” – Crash Davis

64. “God, that sucker teed off on that like he knew I was gonna throw a fastball!” – Ebby Calvin LaLoosh

65. “If you give in now, you might start losing. Huh? Never f*ck*ng with a winning streak.” – Crash Davis

66. “You can keep going to the ballpark, and keep getting paid to do it. Beats the hell out of working at Sears.” – Skip

67. “Relax, all right? Don’t try to strike everybody out. Strikeouts are boring! Besides that, they’re fascist. Throw some ground balls, it’s more democratic.” – Crash Davis

68. “You got a gift. When you were a baby, the Gods reached down and turned your right arm into a thunderbolt. You got a hall of fame arm, but you’re pissing it away.” – Crash Davis

72. “Christ, you don’t need a quadraphonic Blaupunkt! What you need is a curveball! In the show, everyone can hit the heat.” – Crash Davis

74. “Is the modern-day athlete a pale imitation of the great old warriors?” – Cullinane

84. “Now, I want you to breathe through your eyelids?” – Annie Savoy

86. “Charlie, here comes the deuce. And when you speak of me, speak well.” – Crash Davis

87. “I think it would be great. The Sporting News should know about it.” – Annie Savoy

88. “Women never get lured. They’re too strong and powerful for that.” – Annie Savoy

89. “Come on, Annie, think of something clever to say, huh? Something full of magic, religion, bullshit. Come on, dazzle me.” – Crash Davis

90. “She’s getting pretty steamed, actually, because I’m still re-channeling my sexual energy. I’m figuring I’m just gonna cave in and sleep with her. You know, calm her down.” – Ebby Calvin LaLoosh

91. “Well, you two are the most promising prospects of the season so far, so I just thought we should kinda get to know each other.” – Annie Savoy

92. “Making love is like hitting a baseball, you just gotta relax and concentrate.” – Annie Savoy

93. “What’s this guy know anyway? If he’s so great how come he’s been in the minors for ten years? If he’s so good, how come Annie wants me instead of him?” – Ebby Calvin LaLoosh

94. “Oh, hey, and another thing, Meat. You don’t know sh*t, all right? If you wanna make it to the bigs, you’ll listen to me. Annie only wants you so she can boss you around, got it?” – Crash Davis

96. “Like the lava lizards of the Galapagos Islands.” – Annie Savoy

97. “Your fastball’s up, your curveball’s hanging. In the show, they would’ve ripped you.” – Crash Davis

98. “Baby ducks are cute. I hate cute! I want to be exotic and mysterious.” – Annie Savoy

99. “You think Dwight Gooden leaves his socks on?” – Annie Savoy

100. “Guys will listen to anything if they think it’s foreplay.” – Annie Savoy

102. “Well, he called it the Bermuda Triangle. He said that a man could get lost in there and never be heard from again.” – Ebby Calvin LaLoosh

104. “My Triple-A contract gets bought out so I can hold the flavor of the month’s d—in the bud leagues? Is that it? Well, f*ck this f*ck*ng game.” – Crash Davis

105. “So is somebody going to go to bed with somebody or what?” – Ebby Calvin LaLoosh

Did You Learn Something About Baseball, Love, and Life From This Collection?

This classic movie portrayed the struggle of humanity, not just with baseball players. In the film, we saw that the trouble each person experienced in their daily lives and surroundings taught them many lessons. The connection between this movie and real life is fantastic.

Watching this movie will make you realize that success is not just about winning but also about having the right attitude and personality. The film also makes us believe in love, trust, and camaraderie.

We hope that this list was able to give you a deeper understanding of the sport and life in general. Let the quotes from this collection guide you in making wiser decisions in all aspects of your life.

Did you enjoy reading these Bull Durham quotes? Do you have quotes you would like to add? Don’t forget to write them in the comments section.