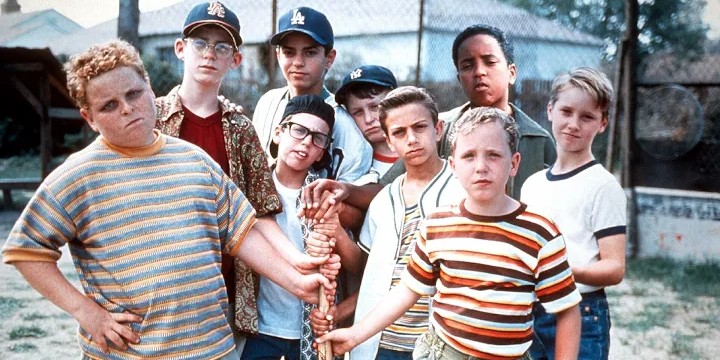 Read these top The Sandlot quotes and be ready for a rush of meaningful lessons you can apply in your day-to-day life.

The Sandlot is a coming-of-age sports movie that anchors itself on baseball. At first glance, it might look like the main focus is the sport itself. However, let’s all take a step back and remember that this 1993 release is a coming-of-age story, too.

Because of that fact, The Sandlot has lots of lessons every young girl and boy can learn from. It teaches us about the wonders of friendship and how life allows second chances, no matter how harsh it might seem.

We get a taste of these lessons through Scotty Smalls and his newfound friends. So, read through to the end and find the morals you’ve been looking for!

And don’t forget to check out these Moneyball quotes and Field of Dreams quotes.

1. “Man, this is baseball; you gotta stop thinking! Just have fun. If you were having fun, you would have caught that ball!” – Benny Franklin Rodriguez

3. “Let me tell you something, kid. Everybody gets one chance to do something great. Most people never take the chance, either because they’re too scared, or they don’t recognize it when it spits on their shoes. This is your big chance. You shouldn’t let it go by.” – The Babe

4. “I was dead meat. I knew it. They knew it. We had thought that those cards Benny had gotten meant that something great was going to happen. Now I figured that they’d just meant my life was over.” – Scotty Smalls

Scotty Smalls: “Some more of what?”

Scotty Smalls: “I haven’t had anything yet, so how can I have some more of nothing?”

Ham Porter: “You’re killing me, Smalls. These are s’mores stuff, ‘kay? Pay attention. First, you take the graham. You stick the chocolate on the graham. Then, you roast the mallow. When the mallow’s flaming, you stick it on the chocolate. Then you cover it with the other end. Then, you scarf. Kind of messy, but good. Try some.”

6. “They never kept score. They never chose sides. They never even really stopped playing the game. It just went on forever. Every day, they picked up right where they left off the day before. It was an endless ‘dream game.’” – Narrator

7. “We all lived in the neighborhood for a couple of more years—mostly through junior high school—and every summer was great. But none of them ever came close to that first one. When one guy would move away, we never replaced him on the team with anyone else. We just kept the game going like he was still there.” – Scotty Smalls

8. “Just stand out there and stick your glove out in the air. I’ll take care of it.” – Benny Franklin Rodriguez

9. “It’s the Law of The Sandlot. Anything that goes over that fence becomes property of The Beast!” – Yeah-Yeah McClennan

The Sandlot Quotes That Will Remind You of This Amazing Movie

10. Squints Palledorous: “Listen to me, Smalls. This is a matter of life and death. Where did your old man get that ball?”

Scotty Smalls: “What? I don’t know. Some lady gave it to him. Why?”

Scotty Smalls: “Yeah. She even signed her name on it. Some lady named Ruth. Baby Ruth.”

11. Mrs. Smalls: “Honey, I want you to make some friends this summer, lots of them.”

Scotty Smalls: “Yeah, I know. But I’m not good at anything, mom. Face it, I’m just an egghead.”

12. “Maybe the shock of his first homer was just too much for him.” – Bertram

13. “Michael Squints Palledorous walked a little taller that day. And we had to tip our hats to him. He was lucky she hadn’t beat the crap out of him. We wouldn’t have blamed her. What he’d done was sneaky, rotten, and low and cool. Not another one among us would have ever in a million years for a million dollars had the guts to put the move on the lifeguard. He did. He had kissed a woman. And he had kissed her long and good. We got banned from the pool forever that day. But every time I walked by after that, the lifeguard looked down from her tower, right over at Squints, and smiled.” – Scotty Smalls

15. “Man, base up, you blockheads!” – Benny Franklin Rodriguez

17. “It’s about time, Benny. My clothes are going out of style!” – Squints Palledorous

19. Benny Franklin Rodriguez: “Oh, um. You got a fireplace?”

Benny Franklin Rodriguez: “Throw that hat in there, man.”

20. “You call that pitching? This is baseball! Not tennis!” – Ham Porter

23. “Now, the key to this game is that you got to keep an eye on the ball no matter whether you’re in a field or on the bed, eye on the ball, okay?” – Bill

25. “Smalls, Babe Ruth is the greatest baseball player that ever lived. People say he was less than a god but more than a man. You know, like Hercules or something. That ball you just aced to The Beast is worth, well, more than your whole life.” – Benny Franklin Rodriguez

Would You Also Want the Neighborhood Kids as Friends if You Were Scotty Smalls?

In The Sandlot, everything starts when Scotty Smalls moves to a new town and joins the neighborhood kids in their baseball games. Once he got accepted by the team, he learned that having great friends really makes life easier. Just look at it this way: how would you feel if you moved to a new place with no friends?

Together, Scotty and his friends have different adventures that are both funny and heartwarming. Through their interactions, The Sandlot perfectly captures the image of one’s coming of age and how friends mold you to become who you are today.

Aside from that, The Sandlot also zooms in on second chances. Scotty wasn’t immediately accepted into the group. Instead, the boys were hesitant as he didn’t really have great athletic talent. But, Benny initiated his acceptance, and soon, the rest followed, and he was able to redeem himself.

We all have second chances in life. Just because we made a mistake one time doesn’t mean we can’t make it right the next time.

With that, we hope you were able to understand The Sandlot’s value beyond its focus on baseball. When you need heartwarming lessons on growth, friendship, and second chances, read our list again.