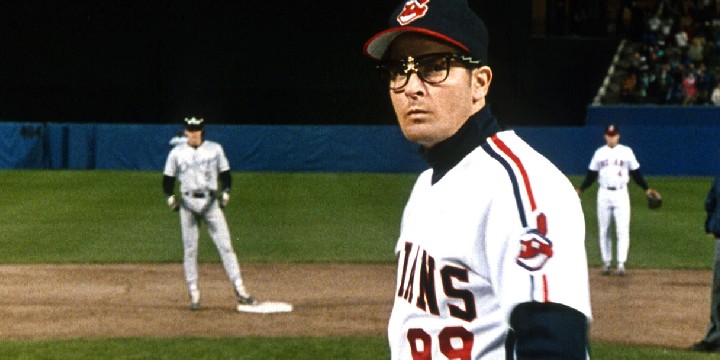 These top 40 Major League quotes will give you essential keys to becoming champions!

Major League is a 1989 baseball movie about unresolved regrets, bruised doubts, and crumpled dreams. It appears to be a comedy at first glance, but it also contains some dramatic elements.

In the movie, Rachel Phelps became the new owner of the Cleveland Indians after her husband died. To move them, she purposefully wanted to make the team horrible. But, when the team members found out about her plot, they decided to win and spite her.

Indeed, Major League is a well-known comedy that left us with many amusing and inspiring quotes. Let’s read some of the movie’s most exciting quotes of all time below!

And don’t forget to check out these baseball quotes and A League of Their Own quotes.

1. “Forget about the curveball, Ricky. Give him the heater!” – Lou Brown

2. “The fact is we lost our two best players to free agency. We haven’t won a pennant in over 35 years, we haven’t placed higher than 4th in the last 15. Obviously, it’s time for some changes.” – Rachel Phelps

3. “Hell of a situation we got here. Two on, two out, your team down by one in the ninth. You got a chance to be a hero on national television—if you don’t blow it.” – Jake Taylor

4. “I have something I think you all ought to know about. It seems that Mrs. Phelps doesn’t think too highly of our worth. She put this team together because she thought we’d be bad enough to finish dead last, knocking attendance down to the point where she could move the team to Miami and get rid of all of us for better personnel.” – Lou Brown

5. “In case you haven’t noticed, and judging by the attendance you haven’t, the Indians have managed to win a few here and there, and are threatening to climb out of the cellar.” – Harry Doyle

6. Charlie Donovan: “How would you like to manage the Indians this year?”

Charlie Donovan: “What do you mean, you don’t know? This is your chance to manage in the big leagues.”

7. Chaire Holloway: “Here in Cleveland? I didn’t know they still had a team!”

8. “I’m hungover, my knees are killing me and if you’re going to pull this at least you could’ve said you were from the Yankees.” – Jake Taylor

9. “Any one of them will give you another two to three inches drop on your curveball.” – Eddie Harris

10. “Rick Vaughn into the wind-up, and his first offering—just a bit outside. He tried the corner and missed.” – Harry Doyle

12. “Haywood swings and crushes this one toward South America. Tomlinson is gonna need a visa to catch this one, it is out of here, and there is nothing left but a vapor trail.” – Harry Doyle

14. Pedro Cerrano: “Jesus, I like him very much, but he no help with curveballs.”

Lou Brown: “Come on Dorn, get in front of the damn ball! Don’t give me this ‘olé’ bullshit!”

15. “Bats, they are sick. I cannot hit curveballs. Straight ball, I hit it very much. Curveball, bats are afraid. I ask Jobu to come, take fear from bats—he will come.” – Pedro Cerrano

16. “Of course if the umps are watching me real close, I’ll rub a little jalapeno up my nose, get it running.” – Eddie Harris

17. “Cerrano’s looking for some extra power for tonight. He’s looking to sacrifice a live chicken. Hey Jake, man, we can’t have people puking in the locker room before the game! – Willie Mays Hayes

18. “Heywood leads the league in most offensive categories, including nose hairs. When this guy sneezes, he looks like a party favor.” – Harry Doyle

19. Willie Mays Hayes: “What the hell league have you been playing in?”

Willie Mays Hayes: “Never heard of it. How’d you end up playing there?”

21. “With your speed, you should be hitting the ball on the ground and be legging them out. Every time I see you hit one in the air, you owe me 20 push-ups.” – Lou Brown

23. “Low and Vaughn have walked the bases loaded on 12 straight pitches. Boy, how can these guys lay off pitches that close?” – Harry Doyle

26. “Forget it, I’ll order. Let’s have a toast. Here’s to baseball, and to the start of two great careers. And for me, here’s to one more good year in the sun.” – Jake Taylor

27. “The Duke leads the league in saves, strikeouts per inning, and hit batsmen. This guy threw at his own kid in a father-son game.” – Harry Doyle

28. “Okay Vaughn. They say you’re a pitcher, you’re sure not much of a dresser. We wear caps and sleeves on this level, son. Understood? All right, let’s see what you can do.” – Lou Brown

29. “Remember, fans, Tuesday is Die Hard night. Free admission for anyone who was actually alive the last time the Indians won the pennant.” – Harry Doyle

30. “Don’t you guys go anywhere. I plan to put on a hitting display.” – Willie Mays Hayes

31. “This guy’s the out you’ve been waiting your whole life for.” – Jake Taylor

32. “The local press seems to think that we’d save everyone the time and trouble if we just went out and shot ourselves. Me, I’m wasting sportswriters’ time.” – Lou Brown

33. “They look good. Besides, seeing is the most important thing, son.” – Lou Brown

Jake Taylor: “Well it all depends on how good you are.”

Janice Bowden: “How good are you?”

35. “It’s only temporary. If I can get anybody to watch this team none of this would be necessary.” – Rachel Phelps

37. “No matter how far out of first we are, it’s cool. You know, it keeps us from getting shut out at our favorite hotels and restaurant-type places.” – Rick Vaughn

39. “But since we haven’t won a pennant in over 30 years, nobody recognizes us—not even in our own home town.” – Jake Taylor

Did the Quotes Push You to Be Persistent in Your Pursuit of Success?

Major League is an icon and cult favorite when it comes to sports and baseball movies. If there is one thing that viewers can learn, it is that the concept of losing and winning applies not only in sports but also in life, self, and other aspects.

As the story progressed, we could see each team member’s difficulties in each game. Utilities, equipment, food, and money shortages are all things they must endure to keep the team motivated.

Nothing, however, compares to the joy of becoming a champion despite all the obstacles they faced. Through that, the team was able to prove that motivation, teamwork, and incentive are essential components of success.

We hope that this movie and its quotes were able to motivate you to never stop learning and growing to achieve tremendous success in life. Never let others bring you down, and always shine for yourself! Feel free to reread this list whenever you need a reminder of that or just want to revisit the movie’s best scenes!

Did you find quotes that were relevant to you? What did you learn from today’s collection? Share them below.