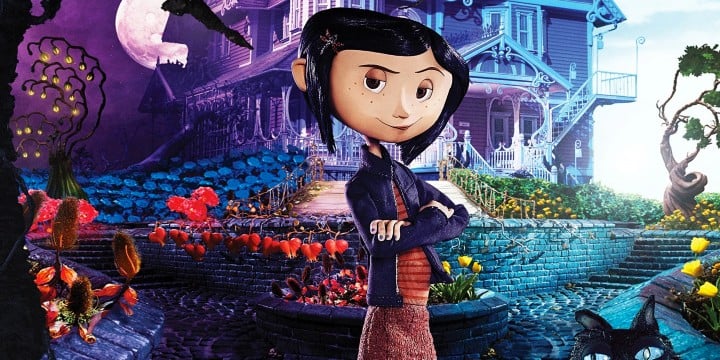 If you love animated films and dark fantasy children’s novels, then these Coraline quotes are for you.

Coraline is a stop-motion animated horror movie released in 2009. It is based on Neil Gaiman’s book of the same name about a girl who discovers a door opening to a mysterious, alternate world. The mature themes that it tackles make it an excellent film for both adults and kids to watch.

This storyline also opens a deep discussion on courage and appreciating what you have. Watching the movie will definitely make you reflect and learn. So, don’t miss out by reading our complete collection below!

And make sure to check out these Megamind quotes and Corpse Bride quotes.

1. “Being brave didn’t mean you weren’t scared. Being brave meant you were scared, really scared, badly scared, and you did the right thing, anyway.” – Coraline Jones

2. “I don’t want whatever I want. Nobody does. Not really. What kind of fun would it be if I just got everything I ever wanted just like that, and it didn’t mean anything? What then?” – Coraline Jones

3. “But how can you walk away from something and still come back to it?” – Coraline Jones

4. “Now you people have names. That’s because you don’t know who you are. We know who we are, so we don’t need names.” – Cat

5. “You probably think this world is a dream come true, but you’re wrong.” – Cat

6. “Nobody sensible believes in ghosts anyway—that’s because they’re all such liars.” – Other Mother

7. “The names are the first things to go after the breath has gone and the beating of the heart. We keep our memories longer than our names.” – The Ghost Children

9. “Nobody is ever given more to shoulder than he or she can bear.” – The Ghost Children

10. “I’m an explorer, and I need all the ways out of here that I can get. So I shall keep walking.” – Coraline Jones

Coraline Quotes to Learn About Love

11. “They say even the proudest spirit can be broken with love.” – Other Mother

Coraline Jones: “You have a very funny way of showing it.”

14. “It was true. The other mother loved her. But she loved Coraline as a miser loves money, or a dragon loves its gold.” – Neil Gaiman, Author

15. “‘It won’t hurt,’ said her other father. Coraline knew that when grown-ups told you something wouldn’t hurt, it almost always did. She shook her head.” – Neil Gaiman, Author

16. “She hugged herself and told herself that she was brave, and she almost believed herself.” – Neil Gaiman, Author

18. “Coraline wondered why so few of the adults she had met made any sense. She sometimes wondered who they thought they were talking to.” – Neil Gaiman, Author

19. “She’s got this whole world where everything’s better. The food, the garden, the neighbors. But it’s all a trap.” – Coraline Jones

20. “Nothing’s changed. You’ll go home. You’ll be bored. You’ll be ignored. No one will listen to you, really listen to you. You’re too clever and too quiet for them to understand. They don’t even get your name right.” – Mr. Bobo

21. “It’s not real scientific, but I heard an ordinary name like Caroline can lead people to have ordinary expectations about a person.” – Wybie Lovat

23. “Nothing to find here. This is just the outside. The part of the place she hasn’t bothered to create.” – Cat

24. “In danger? Thought Coraline to herself. It sounded exciting. It didn’t sound like a bad thing. Not really.” – Neil Gaiman, Author

27. “That is why we could not leave here when we died. She kept us, and she fed on us. Until now, we’ve nothing left of ourselves, only snakeskins and spider husks. Find our secret hearts, young mistress.” – The Ghost Children

28. “It wasn’t the best place to go for a walk, really. There were all these things that people had thrown away back there—old cookers and broken dishes and dolls with no arms and no legs and empty cans and broken bottles. Mum and Dad made me promise not to go exploring back there because there were too many sharp things, and tetanus and such.” – Coraline Jones

Mr. Bobinsky: “They are saying, ‘Do not go through the little door.’ Do you know such a thing?”

30. “‘I didn’t know I had another mother,’ said Coraline cautiously. ‘Of course, you do. Everyone does,’ said the other mother, her black-button eyes gleaming.” – Neil Gaiman, Author

35. “Run, child. Leave this place. She wants me to hurt you, to keep you here forever so that you can never finish the game, and she will win. She is pushing me so hard to hurt you. I cannot fight her.” – Other Father

36. “Coraline hesitated. She turned back. Her other mother and her other father were walking towards her, holding hands. They were looking at her with their black button eyes.” – Neil Gaiman, Author

Coraline Quotes That Will Give You Goosebumps

38. “She walked into the drawing room and looked at the door. She had the feeling that the door was looking at her, which she knew was silly, and knew on a deeper level was somehow true.” – Neil Gaiman, Author

40. Coraline Jones: “I almost fell down a well yesterday, mom.”

42. “The expression of delight on her face was a very bad thing to see. ‘You’re wrong! You don’t know where your parents are, do you? They aren’t there.’ She turned and looked at Coraline. ‘Now,’ she said, ‘you’re going to stay here forever and always.” – Neil Gaiman, Author

46. “We’ll all be together as one big, happy family. Forever and always.” – Other Mother

47. “I asked you not to call me Caroline. It’s Coraline.” – Coraline Jones

Did These Coraline Quotes Make You See the Value of Being Appreciative?

As kids, we have all wished for things around us to be different. Our naivety makes us foolish and never allows us to be grateful and appreciative of what we have. Because of this, we always fail to realize that what we really need in life is already before us.

Sometimes, we even bring these immaturities into our adulthood. One cannot deny that most people, even us, are always searching for something more. We never stop to look around our surroundings and appreciate the gifts of life.

Coraline showed us what it’s like to undervalue the importance of contentment. The ideal home she thought she dreamed of is one devoid of love and genuine care. But, in the end, she was also able to redeem herself when she mustered up the courage to save her parents.

We hope that these Coraline quotes were able to help you mull over the present. Always be grateful for all the imperfections and complexities of life. After all, everything is a learning experience that will make us grow and be wise.

Have you watched Coraline? Which is your favorite line from the film and book? Comment below!