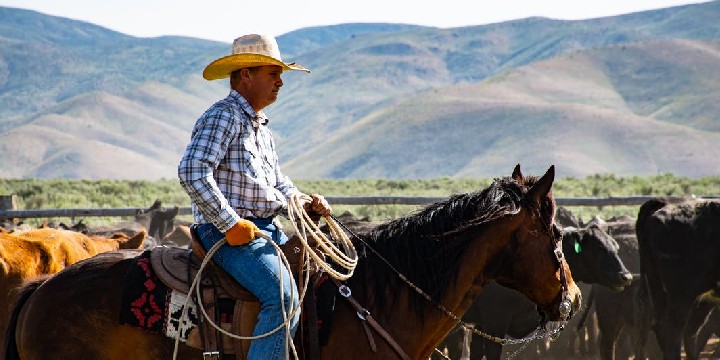 Dive into this list of cowboy quotes that’ll make you want to saddle up and ride into the sunset!

When we think of cowboys, we usually picture them riding around with horses, in gunfights, and hanging out in saloons. This is because, in today’s world, most of us have never met a real cowboy. We just know of them through what we see on television or in movies.

But, behind the media’s portrayal of cowboys lies the truth behind them. They symbolize strength, courage, and fortitude.

Moreover, cowboys are known to be the symbols of the American spirit and character because of their work ethic, bravery, and resourcefulness.

But, some people still fail to appreciate and recognize their good side. As a result, many misconceptions about cowboys have been spread in today’s society.

So, if you want to change your perspective, read this collection from beginning to end.

It will change how you view cowboys and make you realize that they are not what you thought they were!

And don’t forget to check out these country quotes and cowgirl quotes.

1. “A true cowboy knows love, pain, and shame but never cares about the fame.” – Anonymous

2. “The great cowboys are the ones with the biggest hearts.” – Ty Murray

3. “True cowboys are the ones who aren’t afraid to get dirty.” – Lane Frost

4. “We have a sense that we should be like the mythical cowboy—able to take on and conquer anything and live in the world without the need for other people.” – Morrie Schwartz

5. “When you’re a cowboy, life isn’t all about horses and rodeos. It’s about mud and dirt, and cowboy boots.” – Anonymous

6. “If you’re going to wear a cowboy hat, you’re going to have to go all the way. You should have livestock around you, settle all of your disputes with a pistol, and ride a horse absolutely everywhere.” – Tom Segura

7. “Cowboy is a breed tougher than nails and strong as steel.” – Anonymous

8. “Cowboys work hard, play well, love soft, and are a hell of a lot better than any other boy I’ve ever seen.” – Olivia Flannery

9. “A real cowboy doesn’t have to say they are a cowboy, you know, the smell, the expression, and the heart tell itself.” – Anonymous

10. “Despite what people think of cowboys, they take pride in how they look, and that look is important to them.” – Steve Kanaly

17. “You can tell a true cowboy by the type of horse that he rides.” – Anonymous

19. “Cowboys come in many different shapes and sizes, but all cowboys must be able to ride horses.” – Meg Clibbon

20. “Cowboys need nothin’ more than a hat, horse, and the will to ride.” – Anonymous

21. “You may have a cowboy hat, spurs, chaps, and a horse, but you’re not a cowboy till you can ride like one.” – Anonymous

22. “Cowboy. Heroes. Lean and lanky, sitting tall in the saddle and wearing a white hat, riding wild and free across the plains, defeating outlaws and rescuing the defenseless.” – Jeremy Agnew

23. “The cowboy no doubt can be regarded as a proud rider, skilled, observant, alert, resourceful, unyielding, daring, punctilious in a code peculiar to his occupation, and faithful to his trust.” – Charles W. Harris

Cowboy Quotes That’ll Make a Gentleman Out of You

24. “A cowboy is a gentleman with or without his hat and boots.” – Anonymous

27. “Cowboys are gentlemen who treat women with respect and work hard. They use their manners more than any other man would and ride horses and bulls like there is no tomorrow.” – Anonymous

Wise Cowboy Quotes to Learn From

28. “Cowboy work is more than a job; it is a lifestyle and a medium of expression.” – John R. Erickson

29. “Today’s cowboy must know more than how to handle horses and cattle.” – Ramon F. Adams

33. “Some cowboys have too much tumbleweed in their blood to settle down.” – Ken Alstad

34. “A decent cowboy does not take what belongs to someone else, and if he does, he deserves to be strung up and left for the flies and coyotes.” – Roy Bean

35. “Real cowboys don’t need to correct people. They just smile, nod their head, and say yep. Each to his own. That’s the cowboy way.” – Anonymous

36. “A good cowboy knows his limits and those of his horse, and when he finds himself in a position for which, on that particular day, he isn’t qualified, he will give it up without being told or asked to do so.” – John R. Erickson

39. “What do you call a happy cowboy? A jolly rancher!” – Anonymous

40. “Now you are thinking like a thief. Fewer guns and more exits. We’ll cure your cowboy ways yet.” – Richard Kadrey

41. “Any cowboy can carry a tune. The trouble comes when he tries to unload it.” – Anonymous

42. “A cowboy would rather throw a bull than eat beans with his knife.” – Charles Dorian

43. “If cowboys picked wives like they pick horses, they would have lifelong mates.” – Anonymous

44. “No man should have cowboy boots in his wardrobe. That’s fair enough, isn’t it? Unless you’re a cowboy, of course.” – Paul Weller

45. “I thought being a cowboy would be a terribly romantic thing to do. But it wasn’t. I shoveled a lot of stalls.” – Bob Weird

46. “The cowboy look—the hat and bandana—that’s not a fashion statement. That clothing is purely practical.” – Ethan Coen

Poetic Cowboy Quotes That Will Touch Your Heart

47. “And my heart is sinking like a setting sun, setting on the things I wish I’d done. Oh, the last goodbye’s the hardest one to say, and this is where the cowboy rides away.” – George Strait

48. “Sometimes a cowboy isn’t perfect, but you got to love him anyway.” – Jennie Marts

49. “A cowboy’s hands are as strong as steel, as tough as leather, but soft enough to touch a butterfly’s wing and the skin of a woman without disturbing the beauty of either.” – Carol Crandell

50. “The cowboy rides his horse for miles, to watch the herd with songs and smiles.” – Albert J. Harris

51. “It doesn’t matter if a cowboy lives in the mountains or in the flats, as long as it’s warm and there is a place to lay his hat.” – Anonymous

Cowboy Quotes for Those Who Want to Become One

52. “I just fell in love with the cowboy way of life.” – Donald Cerrone

53. “Such is the life and death of a good cowboy.” – Larry McMurtry

54. “Don’t grab your saddle unless you have to. No cowboy worth his beans pulls leather.” – Helen Rushmore

55. “When I grew up, I only had two dreams. One was to be a cowboy, and another was to be in the military. I grew up extremely patriotic and riding horses.” – Chris Kyle

56. “The cowboy horse is a working partner, one with strength, stamina, speed, and cow sense.” – Adrienne Leugers

57. “To the outsider, it’s hard to comprehend, but any cowboy can tell you that rodeo gets in your blood, almost like an addiction. It’s a craving that can only be satisfied by going on to the next rodeo.” – Rosamond Norbury

More Cowboy Quotes for People Who Love to Ride Horses

59. “Cowboys usually keep going until they’ve crippled—injured by animals—run out of money for entry fees and travel expenses, quit, or get killed in the arena. The camaraderie among them is unlike any other sport.” – Chris LeDoux

60. “In a lot of places in the United States and certainly even more places around the world, the image of the cowboy has become, for some people, a negative one. The word ‘cowboy’ implies a strong, stubborn individual whose individualism depends on pulling down other people’s individualism.” – Viggo Mortensen

Do You Think It Is Important for People to Understand the Role of Cowboys in Society?

In many stories and fictional works, cowboys are often depicted as people who have poor manners. But, you must remember that many of these stories are based on opinions, myths, and legends. The truth is, a lot of cowboys are warm people who love nature and animals.

Cowboys are known for their skills in riding horses, roping cattle, and shooting guns. But, they don’t use these skills just to hurt other people; instead, they use them to protect the citizens of their town. They also use these skills to help others in unfortunate situations.

So, while cowboys can be rough, they’re not bad people at all. They are ordinary people, too, who are doing their best to be accepted by society.

With that, we hope this list of quotes was able to provide you with a better understanding of cowboys. Always remember that the cowboy is an integral part of American culture, so you should always be respectful and mindful of them!