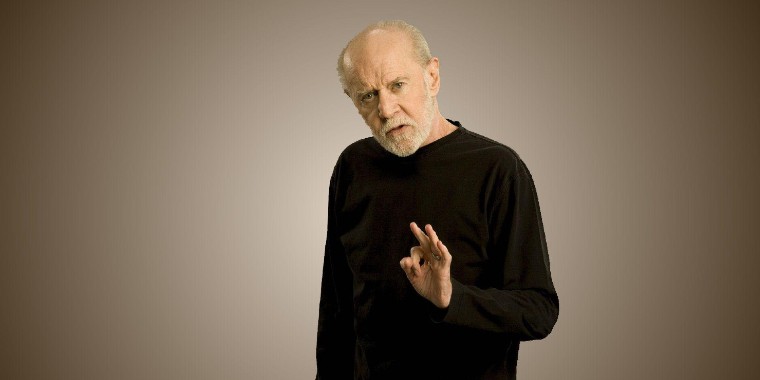 These George Carlin quotes will prove to you that comedy will always be present in every aspect of your life!

George Carlin was a comedian and social critic. He is famous for being named the ‘The Dean of Counterculture Comedians.’ His dark humor penetrates different issues of life, religion, language, and class.

With his daring satirical jokes, his words will make you laugh and make you think profoundly about everything you experience. Most of all, George Carlin will force you to reflect on American culture and society. Indeed, he was a phenomenal performer who changed comedy by bringing to light topics, controversial or not, that needed to be discussed,

So, if you are interested in learning from George Carlin, then add this to your must-read list now. Our collection below contains his best jokes and quotes that you should read at least once in your life.

1. “Life is not measured by the breaths you take, but by the moments that take your breath away.”

3. “It’s called the American dream because you have to be asleep to believe it.”

4. “Trying to be happy by accumulating possessions is like trying to satisfy hunger by taping sandwiches all over your body.”

5. “Those who dance are considered insane by those who cannot hear the music.”

6. “All the media and the politicians ever talk about is things that separate us, things that make us different from one another.”

7. “Property is theft. Nobody owns anything. When you die, it all stays here.”

9. “There’s a humorous side to every situation. The challenge is to find it.”

11. “We have multiplied our possessions but reduced our values. We talk too much, love too seldom, and hate too often. We’ve learned how to make a living but not a life. We’ve added years to life, not life to years.”

12. “Most people work just hard enough not to get fired and get paid just enough money not to quit.”

13. “May the forces of evil become confused on the way to your house.”

15. “Think of how stupid the average person is, and realize half of them are stupider than that.”

16. “Scratch any cynic, and you will find a disappointed idealist.”

17. “A house is just a place to keep your stuff while you go out and get more stuff.”

19. “The reason I talk to myself is because I’m the only one whose answers I accept.”

22. “Life gets really simple once you cut out all the bullshit they teach you in school.”

23. “Laugh often, long and loud. Laugh until you gasp for breath.”

25. “People who see life as anything more than pure entertainment are missing the point.”

26. “Live every day like it’s your last, and eventually, it will be. You’ll be fully prepared.”

27. “I wanna live. I don’t wanna die. That’s the whole meaning of life: not dying! I figured that sh*t out by myself in the third grade.”

28. “Just when I discovered the meaning of life, they changed it.”

29. “The most unfair thing about life is the way it ends. I mean, life is tough. It takes up a lot of your time. What do you get at the end of it? A death! What’s that, a bonus? I think the life cycle is all backward. You should die first. Get it out of the way. Then you live in an old age home. You get kicked out when you’re too young, you get a gold watch, and you go to work. You work 40 years until you’re young enough to enjoy your retirement. You do drugs, alcohol, you party, and you get ready for high school. You go to grade school, you become a kid, you play, you have no responsibilities, you become a little baby, you go back into the womb, you spend your last nine months floating, and you finish off as an orgasm.”

On-Point George Carlin Quotes to Change the Way You Think

30. “Never underestimate the power of stupid people in large groups.”

31. “We are a nation of sheep, and someone else owns the grass.”

32. “Everyone smiles in the same language.”

34. “The caterpillar does all the work, but the butterfly gets all the publicity.”

36. “If it requires a uniform, it’s a worthless endeavor.”

39. “There’s no present. There’s only the immediate future and the recent past.”

41. “By and large, language is a tool for concealing the truth.”

42. “I’m happy to tell you there is very little in this world that I believe in.”

44. “Some people have no idea what they’re doing, and a lot of them are really good at it.”

45. “War is rich old men protecting their property by sending middle class and lower class men off to die.”

46. “Honesty may be the best policy, but it’s important to remember that apparently, by elimination, dishonesty is the second-best policy.”

47. “My advice: just keep moving straight ahead. Every now and then, you find yourself in a different place.”

48. “I think people should be allowed to do what they want. We haven’t tried that for a while. Maybe, this time it’ll work.”

49. “I think it’s the duty of the comedian to find out where the line is drawn and cross it deliberately.”

50. “Conservatives say if you don’t give the rich more money, they will lose their incentive to invest. As for the poor, they tell us they’ve lost all incentive because we’ve given them too much money.”

51. “Obviously, there are people who constrict themselves and build walls around themselves, whether it’s from a moral standpoint or a patriotic standpoint or just plain old conformity, and who therefore live in those little prisons, and when things breach those walls, it’s shocking for them.”

52. “The whole idea of the pursuit of goods and possessions has completely corrupted the human experience, along with religion, which I think limits the intellect.”

53. “Voting is a meaningless exercise. I’m not going to waste my time with it. These parties and these politicians are given to us as a way of making us feel we have freedom of choice, but we don’t. Everything is done to you in this country.”

54. “People are wonderful one at a time. Each one of them has an entire hologram of the universe somewhere within them.”

56. “Religion is like a pair of shoes, find one that fits you, but don’t make me wear your shoes.”

57. “Religion is a self-conferred intellectual decision. It’s not something you get at birth and is unchangeable. You’re collusive with the religion when you accept it. You have a choice.”

58. “I’m completely in favor of the separation of church and state. These two institutions screw us up enough on their own, so both of them together is certain death.”

59. “He, and if there is a God, I am convinced He is a He because no woman could or would ever f*ck things up this badly.”

60. “Religion has actually convinced people that there’s an invisible man living in the sky who watches everything you do, every minute of every day. And the invisible man has a special list of 10 things He does not want you to do. And if you do any of these 10 things, He has a special place, full of fire and smoke and burning and torture and anguish, where He will send you to live and suffer and burn and choke and scream and cry forever and ever till the end of time! But He loves you. He loves you, and He needs money! He always needs money! He’s all-powerful, all-perfect, all-knowing, and all-wise, somehow just can’t handle money!”

How Did George Carlin Change Your Opinions and Thoughts on Comedy?

As audiences, most of the time, we think that comedy is a shallow genre that is only made for everyone’s amusement. But, we must know that it is a form of art that holds weight because it is always rooted in reality.

George Carlin’s humor is a groundbreaking way of introducing people to the absurd culture and society we all live in. He exposed the truth and gave us realizations about life through his witty lines. In this way, he proved that comedy is found even in the most political and social issues we face.

Indeed, these George Carlin quotes will change how you view comedy and life. He was an artist that would educate us, make us laugh, and make us think deeply, even about the most profound ideas. Whenever you need to see life’s lighter side, read through this list again and find humor in your everyday life!