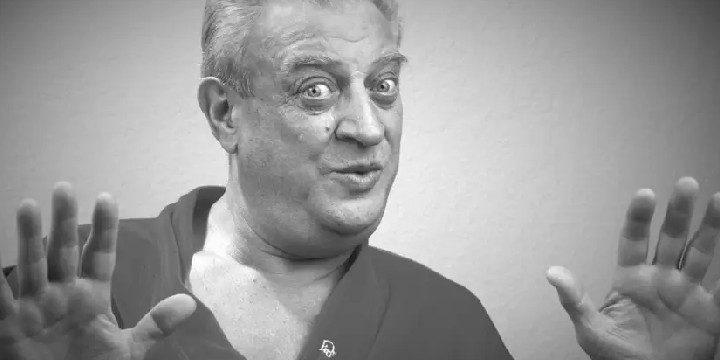 Rodney Dangerfield was an American stand-up comedian born in 1921. He gained popularity through his self-deprecating humor and his “I don’t get no respect” catchphrases and monologues.

His career began when he worked as a stand-up comedian at the Fantasy Lounge in New York City. This unique opportunity was his starting point to becoming a big personality on late-night talk shows in the ‘60s and ‘70s.

Indeed, Rodney Dangerfield gave the world countless things to laugh about. Just a word from him, and everyone would be entertained from days on end.

With his continuous efforts, he became a leading performer in the Las Vegas casino circuit for over 20 years.

Let us browse through some of his most hilarious lines. Sit back, relax, and brighten your mood through the list below!

And don’t forget to check out these Anthony Jeselnik quotes and Bo Burnham quotes.

1. “Men who do things without being told draw the most wages.”

3. “Acting deals with very delicate emotions. It is not putting up a mask. Each time an actor acts, he does not hide; he exposes himself.”

5. “A girl phoned me the other day and said, ‘Come on over, there’s nobody home.’ I went over. Nobody was home.”

6. “I told my psychiatrist that everyone hates me. He said I was being ridiculous—everyone hasn’t met me yet.”

7. “My psychiatrist told me I was crazy and I said I want a second opinion. He said, ‘Okay, you’re ugly too.’”

8. “With my doctor, I don’t get no respect. I told him I want a vasectomy. He said with a face like mine, I don’t need one.”

9. “I remember the time I was kidnapped and they sent a piece of my finger to my father. He said he wanted more proof.”

10. “I found there was only one way to look thin: hang out with fat people.”

14. “What a kid I got, I told him about the birds and the bees and he told me about the butcher and my wife.”

15. “I have good-looking kids. Thank goodness my wife cheats on me.”

16. “I could tell my parents hated me. My bath toys were a toaster and a radio.”

17. “My father carries around the picture of the kid who came with his wallet.”

19. “I was such an ugly kid—when I played in the sandbox, the cat kept covering me up.”

20. “I get no respect. The way my luck is running, if I was a politician I would be honest.”

23. “One year they asked me to be a poster boy—for birth control.”

25. “I walked in on my wife and the milkman, the first thing she says is ‘Don’t tell the butcher!’”

28. “There’s only one thing wrong with my wife’s face—it shows.”

29. “I tell ya, I know the best way to get girls. I hang out at women’s prisons, and wait for parolees.”

30. “I told my wife a man is like wine, he gets better with age. She locked me in the cellar.”

32. “In my life, I’ve been through plenty. When I was three years old, my parents got a dog. I was jealous of the dog, so they got rid of me.”

33. “I come from a stupid family. My father worked in a bank. They caught him stealing pens.”

Short Rodney Dangerfield Quotes for a Quick Dose of Comedy

37. “On Halloween, the parents sent their kids out looking like me.”

43. “My wife is always trying to get rid of me. The other day she told me to put the garbage out. I said to her I already did. She told me to go and keep an eye on it.”

44. “We sleep in separate rooms, we have dinner apart, we take separate vacations. We’re doing everything we can to keep our marriage together.”

45. “My marriage is on the rocks again. Yeah, my wife just broke up with her boyfriend.”

49. “Last week I told my psychiatrist, ‘I keep thinking about suicide.’ He told me from now on I have to pay in advance.”

50. “My doctor told me to watch my drinking. Now I drink in front of a mirror. I drink too much. Way too much. My doctor drew blood. He ran a tab.”

51. “I went to see my doctor. ‘Doctor, every morning when I get up and look in the mirror—I feel like throwing up. What’s wrong with me?’ He said, ‘I don’t know but your eyesight is perfect.’”

52. “I came from a real tough neighborhood. Once a guy pulled a knife on me. I knew he wasn’t a professional, the knife had butter on it.”

53. “I came from a real tough neighborhood. On my street, the kids take hubcaps—from moving cars.”

54. “I came from a real tough neighborhood. I put my hand in some cement and felt another hand.”

55. “I came from a real tough neighborhood. Why, every time I shut the window I hurt somebody’s fingers.”

Rodney Dangerfield Quotes to Get a Sneak Peek of His Youth

56. “My mother never breastfed me, she told me she only liked me as a friend.”

57. “When I was born, the doctor came out to the waiting room and said to my father, ‘I’m very sorry. We did everything we could. But he pulled through.’”

58. “When I was born I was so ugly the doctor slapped my mother.”

59. “My mother had morning sickness after I was born.”

60. “One time my whole family played hide and seek. They found my mother in Pittsburgh!”

Did You Find Yourself Laughing More From One Quote to the Next?

Rodney Dangerfield was one of those comedians whose punchlines never get old. He knew how to surprise audiences with his self-deprecating jokes and one-liner wordplays. This is why he became a hit on The Ed Sullivan Show and was a frequent guest on The Tonight Show.

But, contrary to his public persona, his early life was nowhere amusing. Rodney Dangerfield suffered from his mother’s cruelty and father’s absence, compelling him to support himself and his family. More than that, he was also sexually abused by a man in their neighborhood.

Perhaps Rodney’s humor teaches us one important thing: while we should not invalidate our struggles, we can come out strong if we move forward and never allow them to define our lives. Harsh and unpleasant experiences can lead us to where we belong—a bigger, better place we all deserve.

The comedian may have left us, but his spirit lives on through his hilarious lines. He’s a gem who reminds us to take a respite and live life a little less seriously. After all, it doesn’t hurt to laugh at our problems and find joy in a rather cruel world.

Which of the quotes made you giggle the most? Want to add more Rodney Dangerfield quotes? List them below!