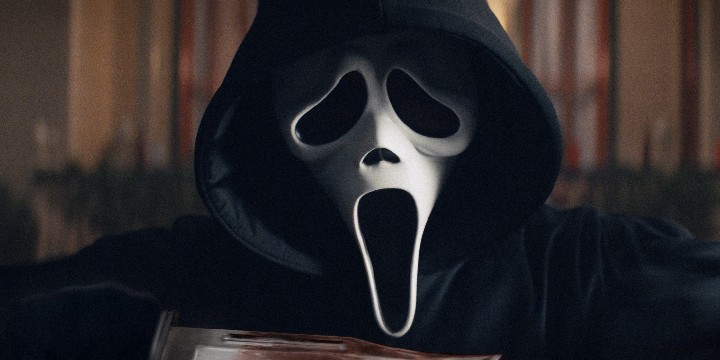 If you’re someone who gets excited about the thought of scary movies, these Ghostface quotes are perfect for you!

Ghostface is a serial killer who hides behind a mask and brutally slashes his victims. His murderous plan begins with stalking and calling the victim on the phone. He then quizzes them on horror movie trivia, threatening to kill them if they refuse to play along.

Since Scream’s initial release, his character has been an icon in the horror movie world. Many people even use Ghostface’s mask for pranks or as their Halloween costumes!

Indeed, the Scream franchise and Ghostface’s character have become cult favorites. So, if you’re a fan, make sure you read through the list below.

And don’t forget to check out these Scream quotes and Chucky quotes.

2. “If you want to be in the hospital, I’d be happy to put you there—in the f*cking morgue!”

12. “I think I have just enough time to slice someone open!”

15. “I’m going to slit your eyelids in half so you don’t blink when I stab you in the face.”

16. “Have you ever felt a knife cut through human flesh and scrape the bone beneath?”

17. “What you really should be asking is, did you just lock me in or out?”

18. “You’ll die when I want you to, Sidney, not a moment before. Until then, you’re going to suffer!”

20. “Scary night isn’t it? With the murders and all. It’s like right out of a horror movie or something.”

21. “But you, you’re the dumb blonde with the big t*ts. I’ll have some fun with you before you die.”

22. “There are two main doors to your house. The front door and the back patio door. If you answer correctly, you may live. Very simple.”

23. “It was a simple game, Cotton, you should have told me where Sidney was. Now you lose!”

24. “That’s right—you gave it up. Now you’re no longer a virgin Ooh! I said ‘virgin’ Whoops! Now you got to die, those are the rules.”

Ghostface: “Someone who knows your little secret.”

27. Casey: “Look, I am two seconds away from calling the police!”

Ghostface: “They’ll never make it in time. We’re out in the middle of nowhere.”

29. “More of a game really. Can you handle that—blondie?”

Ghostface Quotes for a Night Full of Chills

32. “You hang up on me I will cut through your neck until I feel bone!”

34. “If you hang up on me, you’ll die just like your mother! Do you wanna die, Sidney? Your mother sure didn’t!

Short Ghostface Quotes That Will Make You Cringe

39. “I hear you like horror movies, Kirby. But do you like them as much as him? Forget watching Stab. Instead, you get to live it.”

40. “Name the movie that started the slasher craze: Halloween, Texas Chainsaw Massacre, Last House on the Left, or Psycho?”

Which of These Ghostface Quotes Reminded You of Your Favorite Scream Movie Scene?

Scream is a classic horror franchise, and Ghostface, one of its main characters, is equally famed. He’s a hallmark for Halloween costumes worldwide and just became an icon in the world of horror in general.

Ghostface has a very violent nature, and his scenes almost always end up bloody. But, despite this, we can also pick up some essential lessons from his interactions with the other characters.

For one, we should be more cautious and alert of who we encounter, especially strangers. The world is a dangerous place, and we can’t know if the person in front of us is harboring ill intentions. Remember that though we should face life optimistically, we should still always be wary and on guard when it comes to our safety.

We hope these Ghostface quotes were able to entertain you and teach you a thing or two about the truth behind scary movies. Make sure to share these quotes with your friends so you can revisit his best scenes in Scream!