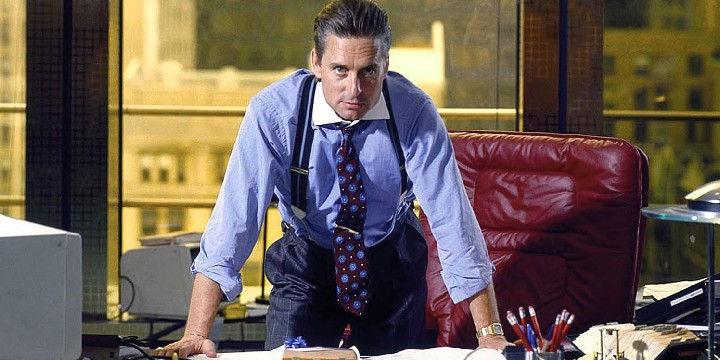 These Gordon Gekko quotes will teach you about the inner workings of business, investments, and making money.

Gordon Gekko is one of the main characters in the 1987 Wall Street movie. His role is so great that he also became a composite character in its 2010 sequel. Gekko is a ridiculously wealthy individual who made most of his fortune by buying and selling stocks and dismantling businesses to maximize profit.

He may not be the nicest person on Wall Street. But, his financial advice can help you figure things out in your own life. Here are some of his witty quotes and lines for you to think about and reflect on!

And don’t forget to check out these money quotes and The Wolf of Wall Street quotes.

1. “The most valuable commodity I know of is information.”

2. “We are smart enough not to buy into the oldest myth running; love. A fiction created by people to keep them from jumping out of windows.”

3. “Don’t run when you lose, don’t whine when it hurts. It’s like first grade. No one likes a crying baby.”

4. “The mother of all evil is speculation.”

7. “First lesson in business is: don’t get emotional about stock, clouds your judgment.”

8. “I’m gonna make you rich, Bud Fox. Yeah, rich enough, you can afford a girl like Darien. This is your wake-up call, pal. Go to work.”

9. “I don’t like losses, sport. Nothing ruins my day more than losses. Now you do good, you get perks, lots and lots of perks.”

13. “You want another chance? You stop sending me information, and start getting me some.”

16. “It’s not always the most popular person who gets the job done.”

17. “Well, in my book you either do it right or you get eliminated.”

Gordon Gekko Quotes to Show His Views on Greed and Money

18. “The point is, ladies and gentlemen, that greed, for lack of a better word, is good. Greed is right, greed works.”

20. “It’s not a question of enough, pal. It’s a zero-sum game, somebody wins, somebody loses. Money itself isn’t lost or made, it’s simply transferred from one perception to another.”

22. “You’re walking around blind without a cane, pal. A fool and his money are lucky enough to get together in the first place.”

23. “Greed clarifies, cuts through, and captures the essence of the evolutionary spirit.”

25. “Greed, in all of its forms; greed for life, for money, for love, knowledge has marked the upward surge of mankind.”

26. “Now you’re not naive enough to think we’re living in a democracy, are you buddy? It’s the free market. And you’re a part of it.”

27. “The richest 1% of this country owns half our country’s wealth, 5 trillion dollars.”

28. “America, America has become a second-rate power. Its trade deficit and its fiscal deficit are at nightmare proportions.”

29. “And I’m not talking $400,000 a year working Wall Street stiff flying first class and being comfortable, I’m talking about liquid. Rich enough to have your own jet. Rich enough not to waste time.”

31. “The new law of evolution in corporate America seems to be survival of the unfittest.”

32. “This painting here? I bought it 10 years ago for $60,000, I could sell it today for 600. The illusion has become real, and the more real it becomes, the more desperately they want it. Capitalism at its finest.”

34. “You could’ve been one of the great ones, Buddy. I looked at you and saw myself. Why?”

35. “I guess you think you taught the teacher a lesson that the tail can wag the dog huh?”

36. “I loved it at 40, it’s an insult at 50. They’re analysts, they don’t know preferred stock from livestock, alright? When it hits south, we raise the sperm count on the deal.”

37. “I want to know where he goes, what he sees, I want you to fill in the missing pieces of the puzzle.”

38. “Ever wonder why fund managers can’t beat the S&P 500? ‘Cause they’re sheep, and sheep get slaughtered.”

39. “We make the rules, pal. The news, war, peace, famine, upheaval, price of a paper clip. We pick that rabbit out of the hat when everybody sits out there wondering how the hell we did it.”

41. “This is the kid, calls me 59 days in a row, wants to be a player. There ought to be a picture of you in the dictionary under persistence, kid.”

Gordon Gekko Quotes to Provoke You

42. “I opened the doors for you! Showed you how the system works! The value of information! How to get it! Fulham oil! Brant resources! Geodynamics! And this is how you f*cking pay me back you cockroach?”

43. “When I get a hold of the son of a b*tch who leaked this, I am going to tear his eyeballs out and suck his f*cking skull.”

44. “What the hell is Cromwell doin’ giving a lecture tour when he’s losing 60 million a quarter? Guess he’s giving lectures on how to lose money.”

45. “Did you think you could’ve gotten this far this fast with anyone else, huh? That you’d be out there dicking someone like Darien?”

47. “Where the hell are you? I am losing millions! You got me into this company and sure as hell better get me out or the only job you’ll have on the street is sweeping it! You hear me, Fox?”

48. “You’d still be cold calling widows and dentists tryin’ to sell ’em 20 shares of some dog sh*t stock. I took you in.”

49. “You tell those spineless *ssholes we’ll self-insure if they don’t write it. I can’t believe you can fire half the management, nothing changes!”

50. “You work hard? I’ll bet you stayed up all night analyzing that dogshit stock you gave me, huh? Where’d it get you? My father worked like an elephant pushing electrical supplies and he dropped dead at 49 with a heart attack and tax bills.”

51. “Blow ’em away, Ollie. Rip their f*cking throats out. Stuff ’em in your garbage compactor.”

52. “Jesus, if this guy owned a funeral parlor nobody would die!”

53. “I’m afraid, pal, unless your father is on the board of directors of another company, you and I are going to have a very tough time doing business together.”

54. “I’ve never seen a painting that captures the beauty of the ocean, at a moment like this.”

55. “Because it’s wreckable, alright? I took another look at it, and I changed my mind.”

58. “Hey, Buddy, you’re still gonna be president, all right? And when the time comes, you’re gonna parachute out, a rich man. With the money you’re gonna make, your dad’s never gonna have to work another day in his life.”

59. “Showdowns bore me, Larry. Nobody wins. You can have company. In fact, it’s gonna be fun watching you and your giant ego try and make a horse race out of it.”

60. “Now, listen, Jerry, I’m looking for negative control. Okay? No more than 30, 35%. Just enough to block anybody else’s merger plans and find out from the inside if the books are cooked. If it looks as good as on paper, we’re in the kill zone, pal. Lock and load.”

Did Gordon Gekko Help You Learn the Ins and Outs of Making Money?

Money is needed for survival in the world. Throughout history, money is the one commodity that has extreme power to control almost everything. This is also one of the biggest reasons businessmen and entrepreneurs launch new businesses—to profit and have the upper hand in society.

The downside is money can blind you and make you greedy. Similar to Gordon Gekko’s personality, he will do anything for money, regardless of the cost to himself. He took advantage of everyone and then disposed of them when he was finished.

Although many of his qualities are not something to look up to, there’s no denying that he instilled wise money-making strategies in the viewers. We learn through Gordon Gekko’s observations that many people don’t have good intentions when it comes to business. That’s why we must recognize who these people are to protect our interests and ourselves.

Indeed, you will meet people who will put down your ideas or take advantage of them. Pay them no mind; instead, figure out who you are and what your financial goals are. Continue to be hungry, and don’t let the expectations of others dampen yours.

Which Gordon Gekko quotes left an indelible impression on you? Let us know in the comments section below.