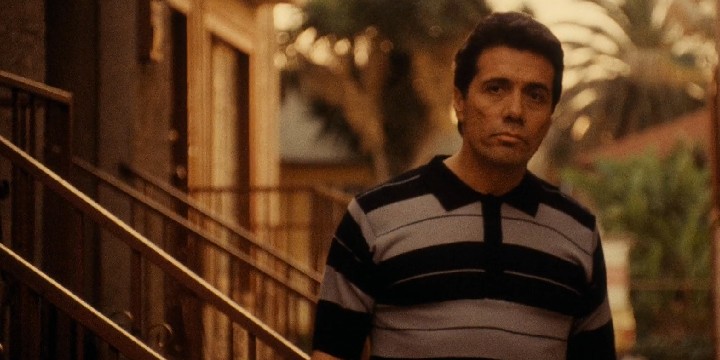 These American Me quotes will introduce you to the great Mexican Mafia leader and his life behind bars.

American Me tells the story of a man named Santana.

He’s a young Hispanic American from East Los Angeles who joins a street gang and ends up in prison while still in high school.

By the time he’s released, he has developed into a skilled, tactical, and well-educated man.

While the movie deviates from the real-life story it’s based on, the foundations of the film are still closely tied to reality.

So, make sure you keep notes of the quotes that speak to you the most and get yourself buckled up for a ride to a completely different world.

And don’t miss out these Paid in Full quotes and Blood In Blood Out quotes.

1. “When we were kids, belonging felt good. But having respect, that feels even better.” – J.D.

4. “Blaming my father for everything I did, isn’t that the life of every kid?” – Montoya Santana

6. “You know, a long time ago, two best homeboys, two kids, were thrown into juvie. They were scared, and they thought they had to do something to prove themselves. And they did what they had to do. They thought they were doing it to gain respect for their people, to show the world that no one could take their class from them. No one had to take it from us, ese. Whatever we had, we gave it away. Take care of yourself, carnal.” – Montoya Santana

7. “Sabes que? I don’t do drugs, I don’t even like them, but they’re there, and it’s a reality. And if I don’t take care of that business, somebody else will.” – Montoya Santana

8. “Let me explain something. For you, for us, for anybody who does business, things happen. And you or your family, your friend can end up doing time. Someone on the line would have to deal with that fact. Now you run the distribution on the outside, we run on the inside. Our offer is that we guarantee your people no problems inside.” – Montoya Santana

9. “Yeah, well, your business kills kids, man! It kills kids! Like Neto and Pablito, and Miko, my son, who looks up to you! Man, they idolize the ground you walk on!” – Yolanda

10. “You know when I met you, I was impressed. Yeah, you talked about La Raza and education and the revolution, but you know what man? You really don’t care about any revolution, do you? You’re nothing but a f*cking dope dealer.” – Yolanda

11. “La Eme took a long time earning the respect in this place, and if we wanna keep it, we gotta show some class.” – Montoya Santana

13. “There’s no f*cking hope for our kids, for our barrios—with people like you around.” – Yolanda

14. “You listen to me. I don’t know who you think you are, but if anything and I mean anything happens to my son’s stay, uncomfortable with over the years, you’ll regret the day when you make that choice.” – Don Antonio Scagnelli

15. “Your mother was a beautiful woman. She made me feel proud. She was 19 years old. Raped—by sailors. After it happened, we never talked about it. Then we got married and we tried to forget. When you were born, I tried to love you. But every time I looked at you, I wondered who your real father was. I wondered which sailor’s blood you carried inside of you.” – Pedro Santana

16. “It’s a mistake, ese. Don’t worry about it. I’ll take care of it. Nothing’s gonna happen to your brother.” – Montoya Santana

More American Me Quotes for You to Enjoy

18. “What the f*ck do you want from me? Do you want me to start over, ese? Get a job? How about becoming a citizen?” – Montoya Santana

19. “I don’t know what’s wrong with you. I don’t know if it is that woman or what? But you’re starting to show weakness and we both know that you can’t do that.” – J.D.

20. “It’s been a long time trying to get it together, dealing with whites and mayates only to be dealing with our own.” – Montoya Santana

Did You Ever Stop and Think About What Life Is Like in Prison?

Most people have no idea what it’s like to be imprisoned. Life behind bars is extremely hard; however, it is up to the individual to make the best of their situation while detained. Some convicts serve their time without learning how to correct their behavior, while others are reborn.

American Me portrays the story of a young man who is introduced to gang life on the tough streets of Los Angeles. Soon, he finds himself facing an 18-year prison sentence. In jail, he rises to the top of the institution’s violent drug trade, but he chooses a redemptive, family-centered lifestyle upon his release.

This film did an excellent job of instilling lessons in its fans and audience. By seeing Santana’s life unfold, viewers are given the time to think about the mistakes they’ve made before and the consequences of those actions. American Me is indeed a reminder that while there’s still time, we should change our ways and the course of our lives.

So, did our collection pique your interest? Do you have some additional quotes to share? List them in the comments section below.