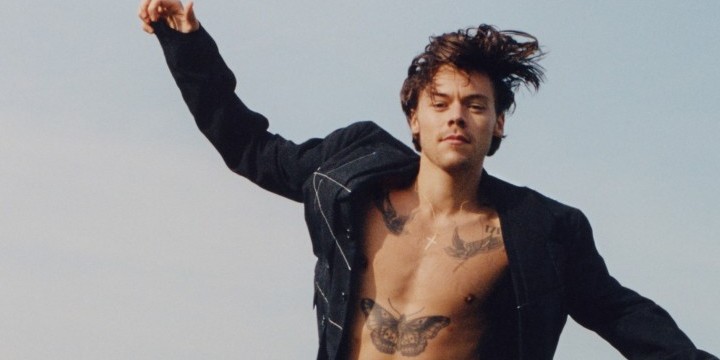 We’ve rounded up the top 60 Harry Styles quotes that will show you that he’s not just a good singer, but a good role model for a lot of people too.

As an artist, Harry Styles is known for his vocal prowess, confidence on stage, and his charming personality.

However, this global superstar is more than just that.

This collection showcases all of the life lessons and nuggets of wisdom we can all learn from his inspiring and carefree personality.

Continue to the full collection below.

And don’t miss out these One Direction quotes and Louis Tomlinson quotes.

2. “I think you should not be scared of embarrassing yourself. I think it builds character.”

3. “Everyone should love themselves and shouldn’t strive for perfection.”

4. “Written in these walls are the stories that I can’t explain.”

7. “Swallow your fears, wipe off your tears, let go of your darkest years. Chin up. Smile. Walk away.”

8. “I’ve always wanted to be one of those people who didn’t really care much about what people thought about them, but I don’t think I am.”

9. “I’d like to take care of someone but at the same time, I like girls who are independent.”

10. “I wouldn’t say I could fall in love at first sight, but maybe I just haven’t done that yet.”

11. “If one heart fits another like a puzzle piece, maybe you could be the missing half of me.”

12. “A lot of the time, the way it’s portrayed is that I only see women in a sexual way. But I grew up with just my mum and sister, so I respect women a lot.”

13. “I like things that involve skill and I love anything that’s a bit of a challenge.”

16. “I’m quite old-fashioned. I like going out to dinner. You have the chance to talk to somebody and get to know them better.”

17. “If you’re going to get in trouble for hitting someone, might as well hit them hard.”

18. “Let us die young or let us live forever. We don’t have the power, but we never say never. Sooner or later we will all be gone, why don’t you stay young?”

19. “I don’t mind getting a black eye or broken arm for a girl, as long as she’s there to kiss it after.”

20. “I’m tired of going to an empty bedroom every night. I wish I had a girl I could cuddle with.”

22. “I can see how you could get dragged into the bad stuff, but I’ve got good friends around me, good family. I think I’ve got my head screwed on.”

23. “I want a girl who respects herself. It means her standards are high and if I fit them, then I’d be honored. If she’s easy, then what does that say about me?”

24. “I don’t want to be one of those people that complain about the rumors. I never like it when a celebrity goes on Twitter and says, ‘This isn’t true!’ It is what it is, I tend not to do that. The only time it gets really annoying is if you get into a relationship, and you get into a place where you really like someone, and then things are being written in the papers that affect them and how they see you. Then it can get annoying.”

25. “Despite the company outside, I believe in equal rights for everyone. I think God loves all.”

37. “It only takes a second to call a girl fat, and she’ll take a lifetime trying to starve herself. Think before you act.”

38. “If you believe in something, then you shouldn’t give up on it.”

40. “Eating toast in the shower is the ultimate multitask.”

41. “That’s the amazing thing about music—there’s a song for every emotion. Can you imagine a world with no music? It would suck.”

43. “Never make eye contact with anyone while eating a banana.”

44. “I find ambition really attractive too—if someone’s good at something they love doing. I want someone who is driven.”

48. “I meditate and pray before going onstage—it helps me focus.”

49. “I can make your girlfriend scream louder than you ever could just by pressing her follow button.”

54. “I don’t think I’ve found anything that feels as good as performing. It’d be fun to try and find it.’’

55. “I just woke up and found a large butterfly on me. When did that happen?”

57. “I heard some stuff recently from Julian Casablancas, and his solo stuff is amazing. If I could write with anyone, it would be him.”

58. “I don’t want to be viewed as a womanizer or whatever. I don’t like going crazy. I like having fun, but it’s nice to wake up in your own bed, isn’t it?”

60. “Trick or treat people with kindness.”

Were These Harry Styles Quotes Able to Inspire You to Challenge the Norms?

Ever since his debut as a member of One Direction, he showed us that there’s no one way route to success, and that winning isn’t only the answer. One Direction didn’t win the top prize in the X Factor, and the group disbanded as well. However, he pushed on to pursue his passions and eventually released his first solo single in 2017. He was a man of many talents, and aside from being a singer, he’s an amazing songwriter too.

But most of all, it’s his mindset and personality that inspired millions of people across the globe. He always preached positivity, respect, and going beyond the norms. Above all, he believed in kindness—in both his personal life and toward the community. And being a person with millions of fans and followers all over the world, we’re lucky that we have someone to look up to with these kinds of values in mind.

Were you a fan of One Direction too? What do you think of Harry Styles and his solo career? Are there any lessons you picked up from this collection today? We’re excited to hear about your thoughts, so don’t forget to leave a comment down below!