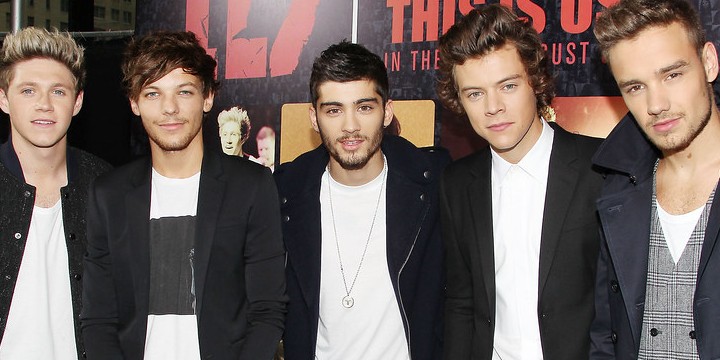 Looking for the best One Direction quotes? You’ve come to the right place. We’ve prepared a collection of top 90 quotes for you.

Dive into one of the music scene’s hottest, most popular boy bands ever created.

One Direction took the world by storm ever since they stepped onto The X Factor stage as a group in 2010, and they’ve broken numerous music records over the past decade.

They grabbed the hearts of the UK public, and they didn’t stop there—they took over the world with fans reaching across the globe.

Here are the top 90 One Direction quotes you’ll need in life.

And don’t forget to check out these Harry Styles quotes and Louis Tomlinson quotes.

1. “A dream is only a dream until you decide to make it real.” – Harry Styles

2. “Swallow your fears, wipe off your tears, let go of your darkest years. Chin up. Smile. Walk away.” – Harry Styles

3. “Life is funny. Things change, people change, but you will always be you, so stay true to yourself and never sacrifice who you are for anyone.” – Zayn Malik

4. “I’d like to take care of someone, but at the same time, I like girls who are independent.” – Harry Styles

5. “If you want to do something, go for it. You’ve got nothing to lose.” – Louis Tomlinson

6. “No matter how many times people try to criticize you, the best revenge is to prove them wrong.” – Zayn Malik

7. “I like things that involve skill and I love anything that’s a bit of a challenge.” – Harry Styles

9. “Dreams are like stars. You may never touch them, but if you follow them, they will lead you to your destiny.” – Liam James

10. “Live life for the moment, because everything else is uncertain.” – Louis Tomlinson

11. “There comes a day when you realize turning the page is the best feeling in the world.” – Zayn Malik

13. “I wouldn’t say I could fall in love at first sight, but maybe I just haven’t done that yet.” – Harry Styles

14. “There’s so much more to the book than the page you were stuck on.” – Zayn Malik

15. “I’ve always wanted to be one of those people who didn’t really care much about what people thought about them, but I don’t think I am.” – Harry Styles

16. “If one heart fits another like a puzzle piece, maybe you could be the missing half of me.” – Harry Styles

18. “A lot of the time, the way it’s portrayed is that I only see women in a sexual way. But I grew up with just my mum and sister, so I respect women a lot.” – Harry Styles

19. “If you’re going to get in trouble for hitting someone, might as well hit them hard.” – Harry Styles

One Direction Quotes on Love and Relationships

20. “I’m the kind of boy that can fall in love with any girl because I love with the heart, not the eyes.” – Niall Horan

22. “Just because you don’t have a prince, doesn’t mean you’re not a princess.” – Zayn Malik

24. “I won’t date a model, because models are perfect and perfect is boring.” – Niall Horan

27. “The best thing about the X Factor is meeting the four best people ever.” – Liam Payne

31. “Call me old fashioned, but I’d like to get to know a girl before I start a relationship.” – Louis Tomlinson

32. “I wish I had a girl to cuddle up with at night instead of my pillow.” – Harry Styles

34. “The worst thing a boy could do to a girl, personally, I think, is to ignore her for a while whilst she’s loving you with all her heart.” – Liam Payne

35. “Some would call our fans crazy, but we think they’re passionate.” – Louis Tomlinson

37. “I don’t need the perfect one, I just need someone who will make me feel like I’m the only one.” – Zayn

38. “We’re not perfect, we’re not clean cut. We’re just trying to be ourselves.” – Louis Tomlinson

One Direction Quotes on Wisdom and Life

40. “It only takes a second to call a girl fat and she’ll take a lifetime trying to starve herself. Think before you act.” – Harry Styles

41. “You know what it would just be amazing to be remembered, you know, like a mum telling a daughter, ‘The boyband of my time, One Direction, they just had fun and they’re just normal guys but terrible, terrible dancers.’” – Louis Tomlinson

42. “You can’t go to sleep without a cup of tea and maybe that’s the reason that you talk in your sleep.” – Louis Tomlinson

43. “I’m by far the neatest person in the band—the others are pigs.” – Zayne Malik

44. “When I was little, I always said I wanted a brother, and now it’s like having four of them.” – Liam Payne

46. “I’d like to think I’m sexy, but I don’t really think I am. I’m not sure if there’s anything sexy about the way I look.” – Louis Tomlinson

47. “We were just normal teenage boys. We were not like robots.” – Harry Styles

48. “It’s important to be yourself and be happy with who you are because that’s what makes you unique.” – Zayn Malik

49. “I think you should not be scared of embarrassing yourself. I think it builds character.” – Harry Styles

50. “Every now and then you have a realization moment where you get goosebumps and think, ‘I am literally the luckiest person in the world.’” – Niall Horan

52. “Being single doesn’t mean that you’re weak. It means that you’re strong enough to wait for what you deserve.” – Niall Horan

53. “Everyone should love themselves and shouldn’t strive for perfection.” – Harry Styles

56. “Just because you have flaws, does not mean you aren’t beautiful.” – Zayn Malik

57. “Life’s a funny thing. The minute you think you’ve got everything figured, something comes along and turns it all upside down.” – Zayn Malik

58. “Written in these walls are the stories that I can’t explain.” – Harry Styles

59. “Don’t ever let a guy make you feel ugly because no matter what, you are beautiful with or without him.” – Zayn Malik

60. “Let us die young or let us live forever. We don’t have the power, but we never say never. Sooner or later, we will all be gone, why don’t you stay young?” – Harry Styles

62. “I can see how you could get dragged into the bad stuff, but I’ve got good friends around me, good family. I think I’ve got my head screwed on.” – Harry Styles

64. “Despite the company outside, I believe in equal rights for everyone. I think God loves all.” – Harry Styles

68. “Just close your eyes and enjoy the rollercoaster that is life.” – Zayn Malik

69. “Before you judge someone else, judge yourself.” – Zayn Malik

One Direction Quotes on Music, Performing, and Fans

70. “Fans always tell me I’m beautiful, but no one will ever be as beautiful as them.” – Louis Tomlinson

71. “Remember where you’ve come from. Know who you are.” – Harry Styles

72. “Without the fans, there’s no reason to be One Direction.” – Zayn Malik

73. “I hate the word ‘famous’ because it has no substance.” – Harry Styles

74. “We needed to make a sound that’s not gonna fit in with everything else—we wanted to make something that was completely unique and individual to us.” – Zayn Malik

75. “I don’t think I’ve found anything that feels as good as performing. It’d be fun to try and find it.” – Harry Styles

76. “We spent a lot of time trying to make a sound that was a One Direction sound. At first, it was quite hard to do that, but I’m really happy with the sound.” – Zayn Malik

77. “Oh it’s the bingo playing wizard. I love you guys so much, but not as much as my bird and my bingo!” – Louis Tomlinson

78. “I heard some stuff recently from Julian Casablancas, and his solo stuff is amazing. If I could write with anyone, it would be him.” – Harry Styles

79. “One Direction is the main thing I’m doing and I’m 100 percent dedicated to the group.” – Zayn Malik

80. “Our parents are obviously proud, but they’re still trying to get used to the fact that we’re in a band. I have a feeling my mom would actually like One Direction if I wasn’t in it!” – Zayn Malik

81. “I’m a massive fan of Drake, and we walked right past him. He’s too cool to be clapping One Direction though.” – Zayn Malik

82. “One Direction have to do their own ironing.” – Liam Payne

83. “If I wasn’t in the music business, I would have loved to have been a drama teacher.” – Louis Tomlinson

85. “We’re lucky because we got a good fanbase, but if they don’t like our music, how long is that going to last?” – Niall Horan

87. “I just woke up and found a large butterfly on me. When did that happen?” – Harry Styles

90. “I find ambition really attractive too—if someone’s good at something they love doing. I want someone who is driven.” – Harry Styles

Were You Able to See Their Messages of Kindness and Love Hidden in Their Music and in Their Inspirational Quotes?

Resting on top of the music world, One Direction became one of the largest and most recognized boy bands in the world. However, that doesn’t mean they’ve forgotten who they are and where they came from. They maintained their humility, charity, and love for others. As a group, they showed their fans and the world how hard it truly is to live and grow up in the spotlight, being watched by millions.

But they stood by their belief that everyone is entitled to their own happiness—it’s just up to them to find it. And even as they broke up as a group, they continue to remind us to cherish every memory, because it is through those memories that we pick up lessons and pieces of wisdom we can use as we go through life.

Did you grow up with One Direction’s music too? Who do you idolize most among the members? Which songs and quotes are your favorites? Be sure to leave a comment down below!