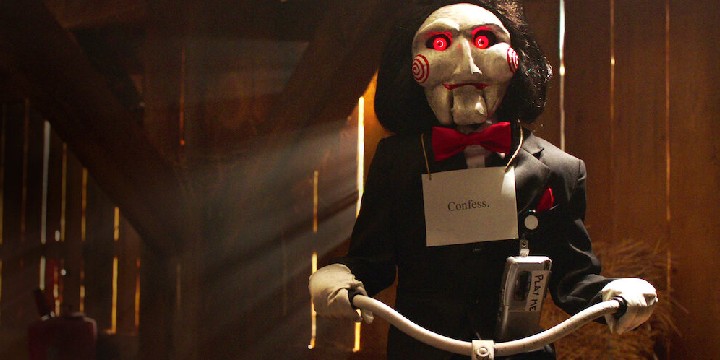 Read these 25 Jigsaw quotes and prepare your mind for some of the most thought-provoking lines ever said!

John Kramer, notoriously known as Jigsaw, is the main character and antagonist of the Saw movie franchise. He might be killing his victims left and right, but Jigsaw is seen to be a vigilante. He’s a rebel who thinks he can actually make a difference in the world.

Sadly, his methods are not something we can justify. The ends would never justify the means. However, he’s very pragmatic and only cares about the ending of his so-called games.

He’s a killer but doesn’t see himself as a villain. Jigsaw is also mad and cruel, but he only wants to make his victims appreciate their lives, albeit through violent and unconventional ways.

To learn more about Jigsaw, read the quotes we’ve gathered below. You’ll be scared out of your wits, but they’ll also have you thinking about life.

And don’t forget to check out these Pinhead quotes and Annabelle quotes.

1. “Death is a surprise party. Unless, of course, you’re already dead on the inside.”

2. “When faced with death, who should live versus who will live are two entirely separate things.”

3. “Congratulations. You are still alive. Most people are so ungrateful to be alive. But not you. Not anymore.”

4. “If you’re good at anticipating the human mind, it leaves nothing to chance.”

6. “As you can see, the choice is not so clear when you’re face to face with the people whose blood will stain your hands.”

8. “Yes, I’m sick, officer. Sick from the disease eating away at me inside. Sick of people who don’t appreciate their blessings. Sick of those who scoff at the suffering of others. I’m sick of it all!”

Jigsaw: “Maybe you will in the next life. You see things aren’t sequential. Good doesn’t lead to good nor bad to bad. People steal, don’t get caught. Live the good life. Others lie, cheat, and get elected. Some people stop to help a stranded motorist and get taken out by a speeding semi. There’s no accounting for it. How you play the cards you’re dealt, that’s all that matters.”

13. “Failure to make the right choice could result in death.”

14. “The rules of our game have been made very clear. You need to abide by those rules.”

15. “I’ve never murdered anyone in my life. The decisions were up to them.”

17. “You think it’s over just because I am dead, but the games have just begun.”

18. “Rise and shine, Adam. You’re probably wondering where you are. I’ll tell you where you might be. You might be in the room you die in. Up until now you simply sat in the shadows watching others live out their lives. But what do voyeurs see when they look in the mirror? Now, I see you as a strange mix of someone angry, yet apathetic. But mostly just pathetic. So are you going to watch yourself die today, Adam, or do something about it?”

19. “Dr. Gordon, this is your wake-up call. Every day of your working life you have given people the news that they’re going to die soon. Now, you will be the cause of death. Your aim in this game is to kill Adam. You have until six on the clock to do it. There’s a man in the room with you. When there’s that much poison in your blood, the only thing left to do is shoot yourself. There are ways to win this hidden all around you. Just remember, ‘X’ marks the spot for the treasure. If you do not kill Adam by six, then Alison and Diana will die, Dr. Gordon, and I’ll leave you in this room to rot. Let the game begin. Follow your heart.”

20. “I’m sure you’re all wondering why you’re here. You deny culpability, no doubt, for the circumstances in which you find yourselves. Salvation can be yours. If you cleanse yourself of the habitual lies that have brought you here. Lies that you have told yourselves. Lies that have brutalized others. Confess; the truth will set you free. But any attempt to violate my rules will kill you. I want to play a game. First, an offering of blood, no matter how little, will give you a green light, to escape from this room with your lives. If you can release yourself from your demons, you can begin to shed the chains that those demons bring with them. Make the simple blood sacrifice that I’ve requested, or face severe consequences. The choice is yours.”

Jigsaw Quotes to Make You Scream

25. Jigsaw: “We can never come from anger or from vengeance. You taught me that.”

Logan Nelson: “But then there’ll be no justice.”

Jigsaw: “But there will. Because we’ll speak for the dead.”

Logan Nelson: “Together, we built a legacy.”

Is There Something New You’ve Discovered About Jigsaw?

Like most villains, Jigsaw’s backstory is heartbreaking. He was an engineer with a loving wife, and they were expecting a child together. Due to unfortunate circumstances, his wife died, and they lost their child.

This caused Jigsaw to spiral into depression, and it came to a point where he wanted to take his own life. He pushed through it, but he survived. This caused him to realize his purpose in life; sadly, that led him to kill lots of people.

Jigsaw’s ultimate purpose was good; he just wanted people to realize how lucky they are to be alive and that they shouldn’t waste it on adultery, doing drugs, and more. Although that’s the case, the way he went about things was all wrong. He contradicted himself and used violence and murder to fulfill his goals.

No matter how righteous we think we or our goals are, we should never harm others. There are other ways to get closer to our goals and reach our purpose, and violence will never be the right way.

So, like what we’ve learned from Jigsaw’s mistakes and realizations, always treasure your life and live with a purpose. Never solve your problems by harming yourself or the people around you. Just take a breather, relax, and try to figure out a new plan for your life.