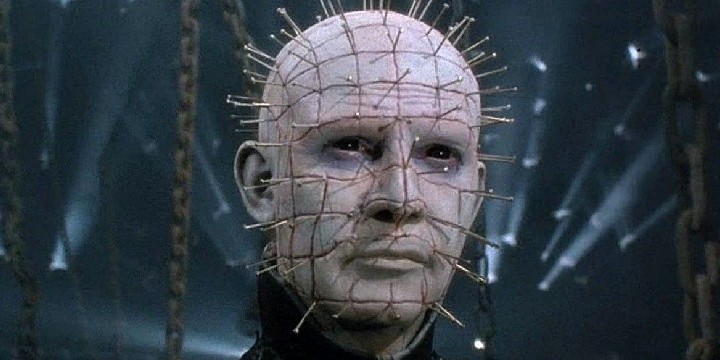 This list of the best Pinhead quotes is perfect for every Hellraiser fan who wants to know more about the leader of the Cenobites.

Pinhead is undoubtedly one of the strongest and deadliest among the Cenobites. He’s probably even more hostile and violent than Michael Myers and Jason Voorhees of the Halloween and Friday the 13th franchises.

His method of attack is using his hooks to mutilate his victims. It’s bloody, inhuman, and downright scary! However, though he’s not a good guy, there has been debate about whether he’s actually evil or not. A snippet of his famous line goes, “Demons to some, angels to others,” and this makes us think about his true nature.

If you’re curious about it like us, or if you want to revisit his best quotes from Hellraiser, this list of quotes will be right up your alley. Read on, and be ready for a fright you’ll never forget!

And make sure to check out these Annabelle quotes and Jigsaw quotes.

1. “Human dreams—such fertile ground for the seeds of torment.”

3. “Your flesh is killing your spirit.”

4. “Do I look like someone who cares about what God thinks?”

6. “This is my body. This is my blood. Happy are they who come to my supper.”

8. “There is a world out there, waiting to yield to us. So much flesh, so many different pleasures.”

9. “Which do you find more exhilarating, Trevor? Pain or pleasure? Personally, I prefer pain.”

10. “Go on, but trick us again child, and your suffering will be legendary even in Hell!”

11. “Explorers in the further regions of experience. Demons to some, angels to others.”

Pinhead Quotes That’ll Have You Hiding Under the Covers

18. “No more deals, child. It is your flesh we want to experience, not your skill at bargaining.”

19. “There is a secret song at the center of the world, Joey, and its sound is like razors through flesh.”

20. “Welcome to the worst nightmare of all—reality!”

21. “Unbearable, isn’t it? The suffering of strangers, the agony of friends.”

24. “You should be very careful what you wish for. It just might come true!”

25. “Temptation is an illusion, but the time for trickery is past. In this game, we show ourselves as we really are.”

Did These Pinhead Quotes Have You Running for the Hills?

Hellraiser is undoubtedly one of the best movie franchises to check out if you want a good scare and psychological thriller. However, without Pinhead, the leader of the Cenobites and the Hell Priest, it certainly won’t be the classic it is now.

Pinhead is an enigma, and if you’re a fan of Hellraiser, you’ll know that he wasn’t introduced in the first installment. His identity was only addressed starting in the second movie, where we see flashes of his backstory as a soldier in World War I. War trauma disillusioned him with reality, humanity, and life.

This was the starting point of the pain that Pinhead is known for. As a Cenobite, he’s brutal, cold, and the epitome of evil and chaos.

Though Pinhead’s presence in Hellraiser is one that’ll no doubt make the hairs on your arms raise, through his backstory, we still get a glimpse of his human side. In addition, we better understand how pain, suffering, and grief can distort a person’s reality and whole being.

With that, we hope you were able to gain a better understanding of Pinhead’s character through the quotes above. Remember, everyone has a reason for being who they are today, even you. So, try to be more open and compassionate about their backstory before judging.