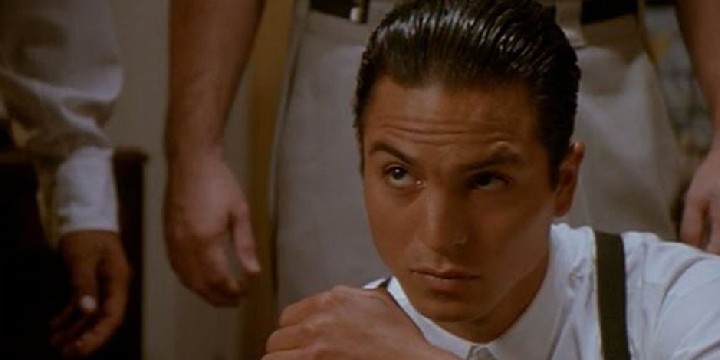 If you enjoy crime drama movies, you must include these Blood In Blood Out quotes on your list of must-reads!

Blood In Blood Out is an American crime drama film released in 1993. It follows the lives of three Chicano relatives who are members of an East Los Angeles street gang.

As dramatic events occur, their lives and friendships are forever altered.

What makes this film a classic is that it’s not only about fighting and killing.

It also addresses various youth-related issues that are still very much relevant to what we are experiencing today.

So, if you want to learn more about the movie and its characters, read the entire list below!

And don’t forget to check out these Paid in Full quotes and American Me quotes.

Best Blood In Blood Out Quotes

1. “When you expect nothing and get everything, that’s destiny.” – Miklo

6. “You should not have done that to my brother, Cruzito, ese! Know what I mean, jellybean? You wanna dance? I know a tune, it’s called stick and cut.” – Paco

8. “You bluff in this game, gabacho, and you better be holding five aces.” – Clavo

9. “Don’t you use Juanito as an excuse to wreck your life. You don’t have that right!” – Paco

12. “You’re a two-time loser, Smokey. One more of this and you are going to be locked up for good. So you tell me about Onda or I’m gonna strap you down with the b*tch and you’ll never see the streets again.” – Paco

14. “Hey, don’t you call me carnal, you piece of sh*t. I’m not your brother, these comebacks of few are killing of our kids.” – Paco

Blood In Blood Out Quotes That’ll Tickle Your Curiosity

15. “Hey, Cinderella, go find yourself a fella, you’re on the clock b*tch and midnight is coming, you got the wrong man.” – Popeye

17. “In the joint, I was hustling more money than that punk ever dreamed of, he punched my time clock. What’s the gig?” – Miklo

Miklo Velka: “Get away from me.”

Popeye: “You get nothing for free in here, punk!”

20. “You think you used your brotherhood up like a shot of tequila?” – Cruz

Funny Blood In Blood Out Quotes to Make You Laugh

Popeye: “Tell him to suck his pee-pee.”

24. “Just like you are now so much of a f*cking badass you kill your own people!” – Cruz

26. “You should get some clothes on the officer before you get arrested for indecent exposure, what an example you set for the kids.” – Popeye

29. “Orale, that’s a nice place you got there, ese. You should be riding with me, not f*cking with me, carnal.” – Popeye

Have You Ever Considered Joining a Gang?

When you hear the term “gang,” what’s the first thing that comes to your mind? For some, they bring fear and violence to neighborhoods. But, there’s also a minority that may argue that they can help reduce crime in society.

In the movie, the three main characters are members of the local gang. After accidentally shooting their rival’s leader during the attack, the cousins’ paths diverge. Miklo is imprisoned, Paco volunteers for military service, and Cruz pursues his artistic passion.

If you’ve seen the movie, you’ll agree that the story of these three cousins is genuinely eye-opening for all of us. They taught us to accept responsibility for our mistakes and avoid making decisions that would negatively impact our present situation. But, on a more positive note, the cousins’ experiences remind us that it is not too late to change and become a better person.

We hope that this collection was able to inspire you to be open to forgiveness and change, no matter how big or small our mistakes are. Remember, no matter how low we get, there will always be an opportunity to live in the right way.

Have you watched the movie before? Are there any good quotes we missed? Comment them down below!