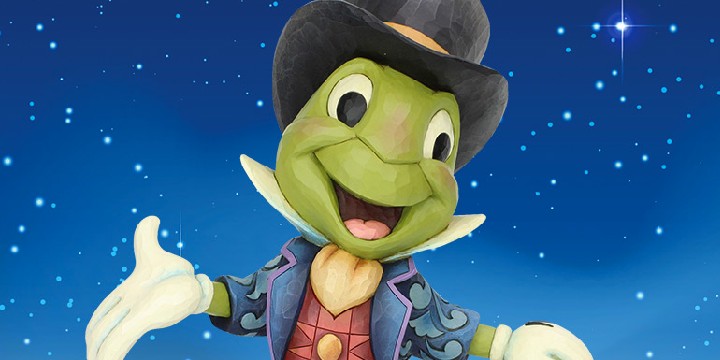 Wish upon a star and make your dreams come true through this collection of inspirational Jiminy Cricket quotes.

Jiminy Cricket is an animated character famous for his appearance in Disney’s Pinocchio. However, true fans will know that he also appeared in Kingdom Hearts, a video game series.

In the movie, he is a cricket who acts as Pinocchio’s conscience and tries to steer him away from destructive behavior. Though his primary role was to serve as a guide for Pinocchio, he’s also a great role model to everyone.

After all, his character encourages people to listen to their conscience and always do right.

It’s been years since the release of Pinocchio. So, if you’re like us and you miss him too, read the quotes below!

And don’t forget to check out these Bugs Bunny quotes and Jessica Rabbit quotes.

2. “When you wish upon a star, makes no difference who you are. Anything your heart desires will come to you.”

3. “No fibbing, now! You know you’re not supposed to tell lies. A lie only grows and grows, ’til you get caught! Plain as the nose on your face!”

4. “Avoid anyone that has a fiendish cackle, a sinister smile, or a diabolical glare, not necessarily in that order.”

6. “You can’t shoulder all your problems alone, ya know. You must have somebody—a friend you can talk to?”

9. “Over here! Cricket’s the name. Jiminy Cricket, at your service.”

11. “Maybe you and I better have a little heart-to-heart talk.”

14. “Pretty, huh? I’ll bet a lot of you folks don’t believe that. About a wish coming true? Well, I didn’t either. Of course, I’m just a cricket singing my way from hearth to hearth, but let me tell you what made me change my mind.”

15. “Well—guess he won’t need me anymore. What does an actor want with a conscience, anyway?”

16. “You are a human animal. You are a very special breed. For you are the only animal who can think, who can reason, who can read.”

17. “If your heart is in your dream, no request is too extreme. When you wish upon a star as dreamers do.”

19. “Like a bolt from the blue. Fate steps in and sees you through. When you wish upon a star. Your dreams come true.”

20. “Oh, my! Who told you that? You need some advice from your conscience!”

21. “That little puppet used to have trouble telling right from wrong. But he’s come a long way. Maybe he doesn’t need Jiminy Cricket anymore. Seems like he’s got a conscience of his very own.”

22. “Well, I’m goin’ with ya. Pinocchio’s gonna need his conscience, and that’s where I come in.”

23. “What’s a conscience! I’ll tell ya! A conscience is that still small voice that people won’t listen to. That’s just the trouble with the world today.”

24. “Go ahead, make a fool of yourself, then maybe you’ll listen to your conscience.”

25. “Anyone can be a fool and do things which are wrong. But fools find out when it’s too late. That they don’t live so long.”

26. “Fighting is a bad idea. Giving in to one’s dark side never accomplishes anything.”

29. “Treat your elders with respect, and don’t be fooled by bad advice. If a guy named Foulfellow invites you to a place called Pleasure Island, don’t go! I mean, he’s got the word, ‘foul’ right in his name! But trust me on the conscience thing.”

Jiminy Cricket Quotes That Zoom in on His Friendship With Pinocchio

30. “Pinocchio! Pinocchio! There’s something phony about all of this. I’ve got to get him outta here.”

34. “Now, hold on! There are all sorts of dangers and temptations out there! I’ll go find Geppetto, so you just wait here. These fellows here will be helping me.”

35. “Your best friend? And what am I? Just your conscience? Okay! That settles it!”

Jiminy Cricket Quotes to Remind You of Your Favorite Scenes

40. “Lampwick, hmph! Lampwick! Burns me up! After all I tried to do for him. Who’s his conscience, anyway? Me or that hoodlum Lampwick? Well, I’ve had enough of this. I’m takin’ the next boat outta here.”

41. “Shhh! Quiet! Let’s get out of here before something else happens.”

46. “Grasshopper? Look here, you impudent young pup! It wouldn’t hurt you to take orders from your grasshopper! Uh—your conscience! If you had one.”

47. “It was terrible. We were scattered. And as far as I can see, I’m the only one who made it to this castle.”

48. “I just don’t believe it. And here I was, up all night, just worried sick about you. Why of all the—Pinocchio!”

50. “I don’t mind being left behind, as long as they’re both safe. Maybe Pinocchio doesn’t need me after all.”

Do You Always Listen to Your Conscience?

Life itself is challenging to navigate. That’s why we’re given tools to survive and thrive in life. Some of these tools include our talents, passions, morals, and of course, our conscience as well.

However, it’s not so easy to always choose to do the right thing, as we can see from Pinocchio. Because of this, the Blue Fairy appointed Jiminy Cricket as his guide—someone that will help the young puppet differentiate between what is right and what is wrong. Though he’s not the main character, his role is essential in building Pinocchio’s personality and traits.

One of the main lessons Jiminy Cricket tried to impart is the importance of one’s conscience. Through the movie, we’re given a glimpse of different scenarios that’ll happen if we fail to listen to our guiding inner voice. After all, destructive behaviors and doing wrong will always lead us toward peril and misfortune.

Our conscience serves as the light that guides us away from the darkness of life. So, let us learn from Jiminy Cricket and his quotes and change our bad habits into good ones!

Did these quotes inspire you to do what is right? Which of these quotes are your favorites? Let us hear your thoughts by leaving a comment below.