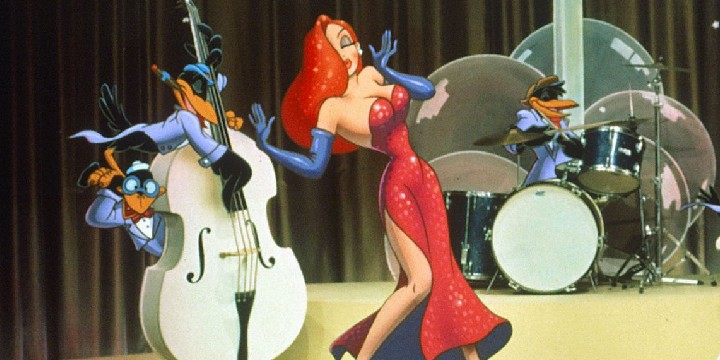 Relive some of your favorite scenes from Who Framed Roger Rabbit with this collection of Jessica Rabbit quotes.

There’s no doubt that Jessica Rabbit is one of the movie’s most entertaining and intriguing characters.

She’s a singer-actress and is known to be the gorgeous and appealing toon-human wife of Roger Rabbit. As a seductive character, she makes most people think that she is wicked and that she has ill intentions for her husband.

She’s been misjudged and framed. But, Jessica Rabbit did her best to prove that looks and outward appearances don’t make you who you are; they don’t shape your personality either. The truth is, her love for Roger is genuine and authentic.

Despite not being the main character, Jessica Rabbit captured the viewers’ hearts and attention.

So, if you’re curious about this witty, bright, and gorgeous femme fatale, make sure you read through to the end.

And don’t forget to check out these Bugs Bunny quotes and Jiminy Cricket quotes.

4. “I just want you to know that I love you, Roger. I’ve loved you more than any woman’s ever loved a rabbit.”

5. “You don’t know how hard it is being a woman looking the way I do.”

6. “You’ve got the wrong idea about me. I’m a pawn in this just like poor Roger.”

7. “I’m weak—you’re strong. Can’t you find a place somewhere in your heart to help me?”

Roger Rabbit: “Was I really?”

Roger Rabbit: “That’s right, my dear. I’d love to embrace you, but first, I have to satisfy my sense of moral outrage.”

11. Jessica Rabbit: “Problem is without Marvin’s will, the land still goes to Cloverleaf.”

Roger Rabbit: “That’s right. If only we knew what happened to that will.”

Jessica Rabbit Quotes That Express Her Love and Admiration for Roger

13. “Maroon wanted to blackmail Acme. I didn’t want to have anything to do with it, but he said that if I didn’t pose for those pattycake pictures, Roger would never work in this town again. I couldn’t let that happen.”

18. Eddie Valiant: “Yeah, I’ll bet you would. You gotta have the rabbit to make the scam work.”

Jessica Rabbit: “No, no, no—I love my husband.”

19. Eddie Valiant: “Seriously, what do you see in that guy?”

Jessica Rabbit: “He makes me laugh.”

20. “From the looks of it, I’d say it was Roger. My honey bunny was never very good behind the wheel.”

Eddie Valiant: “Roger? He chickened out on me back at the studio.”

Great Jessica Rabbit Quotes to Remind You of Your Favorite Scenes

23. Eddie Valiant: “I don’t trust anybody or anything!”

Jessica Rabbit: “Not even your own eyes?”

Eddie Valiant: “Come on, lady, haven’t you ever seen a mole before?”

26 Eddie Valiant: “Oh, there was a will all right. And she and R.K. Maroon killed him for it.”

Eddie Valiant: “Someone else is in here looking for the will, too. Probably Maroon’s flunkies.”

27. “I suppose you think no one’s going to notice Toontown’s disappeared?”

29. “That’s what he told me, except when I opened the envelope, there was only a blank piece of paper inside.”

Eddie Valiant: “We’re even. By the way, I did find your husband.”

Jessica Rabbit: “It’s the truth. Why won’t you believe it?”

Eddie Valiant: “‘Cause I don’t take Acme dumb pills. I don’t know what you’re up to, lady, but I’m gonna nail you for the Acme murder.”

35. “What’re you talking about? There’s no road past Toontown.”

37. “If I’m as bad as you think, what’s stopping me from just killing you right now?”

42. “You, Mr. Valiant, are either drunk or punch drunk. Probably both.”

50. “I hope you’re proud of yourself, and those pictures you took.”

Jessica Rabbit Quotes for Some Much-Needed Thrill and Action

51. “That’s the gun that killed R.K. Maroon, and Doom pulled the trigger.”

53. “Marvin told me. Doom was after his land. Ne was afraid. That’s why he brought me his will.”

55. “Before poor Marvin was killed, he confided in me that Judge Doom wanted to get his hands on Toontown, and he wouldn’t stop at anything.”

Jessica Rabbit: “Don’t worry, you’re not the first. We better get out of here.”

Judge Doom: “That’s right, my dear! Enough to dip Toontown off the face of the earth!”

Eddie Valiant: “I always knew I’d get it in Toontown.”

Jessica Rabbit: “Behind you!”

60. “Last week, some heavy breather wanted one of my nylons as a souvenir. Maybe that’s what he was after?”

What’s the Difference Between Attraction and Love?

Many people would admit that physical characteristics matter greatly when it comes to attraction. But, intimacy and love are not all about looks. Everyone has a different preference or a different view of what makes them attractive, so the definition of attractiveness is subjective; personality is what really matters most.

Many people doubted Jessica Rabbit’s love for Roger. When something terrible happened to him, she became the primary suspect in people’s eyes. On the flip side, though, Jessica Rabbit truly and genuinely loved Roger because of his kindness and talent to make people laugh.

It’s hard to give an actual definition of love or a checklist to review to see whether you’ve fallen in love or not. But, one thing is clear: physical features may be attractive to the eyes, but inner beauty will hit us deeper.

So, refrain from judging other people based on their outward appearances. In the same way, let’s not think negatively and always assume that people have ulterior motives toward another. Instead, let’s do our best to think positively of everyone we come across.