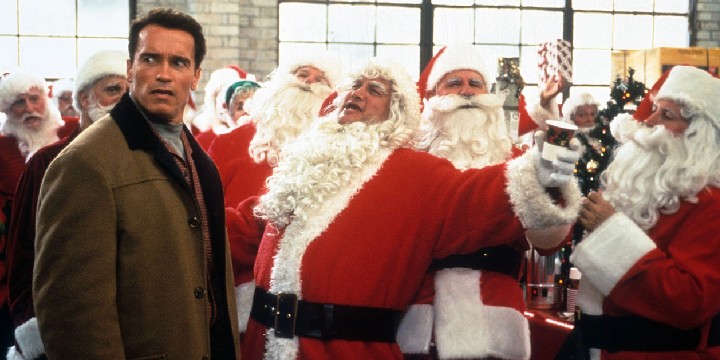 Fill the days leading up to Christmas with laughs with this list of Jingle All the Way quotes!

The perfect recipe for a fun-filled Christmas is a great comedy movie and, of course, Arnold Schwarzenegger! This is what you get whenever you watch Jingle All the Way.

It tells the story of a workaholic father, Howard, trying to make it up to his child by getting him the newest toy of the season, Turbo-Man. It should have been easy enough. Unfortunately, this toy is sold out everywhere!

Howard scrambles to get his hands on his son’s most-awaited toy, and he meets another dad facing the same dilemma—Myron. While hunting down their sons’ toys, the two end up in countless hilarious scenarios, which end in Howard dressing up as Turbo-Man.

It’s a wholesome movie that ended with Howard’s son, Jamie, looking to his father as the real hero. At the same time, Howard understood the importance of valuing family time.

Read the quotes below to reminisce about the best scenes from Jingle All the Way!

And don’t forget to check out these Gremlins quotes and The Santa Clause quotes.

Best Jingle All the Way Quotes

1. “You know what you guys are? Nothing but a bunch of sleazy con men in red suits.” – Howard Langston

2. Officer Alexander Hummell: “As for you, Turbo Man, we could use a man like you on the force.”

Howard Langston: “Thanks, I’ll keep that in mind. Oh, I’m sorry about the bike, and the coffee, and the bus, and the bomb.”

3. “So, champ, are those hands registered weapons yet?” – Howard Langston

4. Ted Maltin: “Howard, they say it might get icy later. You might wanna wrap some chains around those tires.”

Howard Langston: “Maybe I should wrap some chains around you.”

6. “Howard, I’m of the mindset you can never do too much to make a child’s Christmas magical.” – Ted Maltin

8. Liz Langston: “Howard, I’ve been thinking—everything that you went through today for Jamie really shows how much you love him, and if you’re willing to go through all of that for him just for a present, well, that makes me wonder—.”

Liz Langston: “What did you get me?”

9. Howard Langston: “I gotta tell you, Santa, there’s something about this place that doesn’t seem quite Kosher.”

Mall Santa: “Kosher? This coming from a guy who assaulted a toddler for a super ball?”

10. “They sit there and use subliminal messages to suck your children’s minds out! And I know what I’m talking about because I went to junior college for a semester, and I studied psychology, so I’m right in there. I know what’s going on. And then they sit there, and they make your children feel like garbage, and you, the father, who’s working 24/7 delivering mail so you can make an alimony payment to a woman that slept with everybody at the post office, but me! And then when you get the toy, it breaks, and you can’t fix it because it’s a little cheap plastic!” – Myron Larabee

13. “How about these stupid letters from kids to Santa at the North Pole, ‘Dear Santa, can you send me a bike and a slinky?’ No! Your father’s been laid off!” – Myron Larabee

14. “I want the Turbo-Man action figure with the arms and legs that move and the boomerang shooter and his rock ‘n roller jetpack and the realistic voice activator that says five different phrases including, ‘It’s turbo time!’ Accessories sold separately; batteries not included.” – Jamie Langston

Howard Langston: “I can’t believe this; whatever happened to your lofty ideas huh? I thought you’re doing all this for the kids.”

Mall Santa: “Well, sure, but I don’t see why we can’t pick up a little loose change in the process.”

Myron Larabee: “Look, we get one chance a year to prove we’re not screw-ups, and what do we do? We screw it up!”

Howard Langston: “I remember a few years ago, I really wanted to do something special for Jamie. So, I built him his own clubhouse. It came out great. Oh, well the door was a little crooked, right? The roof didn’t sit quite right. But you should have seen his face light up! Ah, when he saw that, he was so excited. We played in that clubhouse the entire day. He even made us have Christmas dinner in it.”

Howard Langston: “Oh, yeah. I was the hero then. Look at me now.”

21. Howard Langston: “You guys are nothing but a bunch of sleazy conmen in red suits.”

Mall Santa: “What did you call us?”

Mall Santa: “At the North Pole, them are fightin’ words, partner.”

22. Jamie Langston: “It’s like Turbo-Man says, ‘Always keep your promises if you want to keep your friends.’”

23. “That really was a bomb? This is a sick world we are living in with sick people.” – Myron Larabee

How Would You Feel if You Had a Dad Like Howard?

Jingle All the Way is a comedy; there’s no doubt about that. However, it also speaks the truth about many households’ reality. After all, a lot of parents nowadays spend more time at work than with their families or kids.

This is also what happened in this 1996 movie. No matter how many funny scenes there are, we can’t help but notice the wholesome message and reminder it’s trying to impart to its viewers, especially parents.

Spend quality time with your children, no matter the season. As Howard realized, we should never take our time with our loved ones for granted. After all, every second is a gift; we’ll never know when we’ll leave this world.

Working will provide our family with a comfortable life. However, beyond that, our children need our undivided attention, time, and love, too.

So, every once in a while, remember the lessons you’ve learned from Jingle All the Way and take some time off work. It doesn’t have to be Christmas, New Year, or any holiday. After all, each day you spend with your children is special in itself!