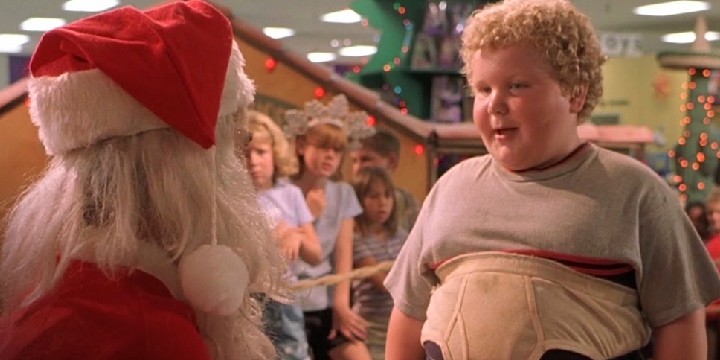 Read these Bad Santa quotes we’ve compiled and get a taste of this Christmas black comedy movie from the Coen brothers.

Bad Santa is exactly what it is. In the movie, two con men pose as the mall Santa and his elf with plans to stay after closing hours and steal from the outlets. Every year, they’ve been successful.

However, this year, Willie, who’s playing Santa, is slightly over the edge. He’s an alcoholic who has a lot of nasty things to say. Because of how he acts, people start questioning who he really is.

While playing Santa, however, he meets Thurman Merman, a friendly young boy. Through their interactions, the kid slowly brings out his kinder side. But, because of his current predicament, Willie gets caught up in many hilarious scenes.

If you want to better understand why Willie is considered a bad Santa, read on. We’ve gathered the best and most famous quotes from the movie.

And don’t forget to check out these Die Hard quotes and Nacho Libre quotes.

Willie T. Soke: “No, I’m not talking about that. I beat the sh*t out of some kids today. But it was for a purpose. It made me feel good about myself. It was like I did something constructive with my life or something, I dunno, like I accomplished something.”

2. “You’re an emotional f*cking cripple. Your soul is dog sh*t. Every single f*cking thing about you is ugly.” – Marcus

Thurman Merman: “Grandma, are you spry?”

Grandma: “Roger, you’re home; let me fix you some sandwiches!”

Willie T. Soke: “Are you f*cking kidding me?”

5. Thurman Merman: “What are their names?”

Willie T. Soke: “You’re sh*ttin’ me? I thought—I was thinking there was a—I don’t know! F*ck, kid; I just call them, you know, Bub, I call them—I say hey Bub or Chief or whatever the f*ck, I tell them to make the goddammed toys.”

6. Sue: “I’ve always had a thing for Santa Claus. In case you didn’t notice. It’s like some deep-seeded childhood thing.”

7. “I’ve been to prison once, I’ve been married—twice. I was once drafted by Lyndon Johnson and had to live in sh*t-*ss Mexico for two and a half years for no reason. I’ve had my eye socket punched in, a kidney taken out, and I got a bone chip in my ankle that’s never gonna heal. I’ve seen some pretty sh*tty situations in my life, but nothing has ever sucked more *ss than this!” – Willie T. Soke

Police Chief: “And you, Santa, drop the elephant!”

Marcus: “How did you get here?”

Police Chief: “All three of you are in so much sh*t, it’s almost unbelievable.”

9. Thurman Merman: “He tried to teach you not to cry and be a man?”

Willie T. Soke: “No. It’s because he was a mean, drunk, son of a b*tch. And when he wasn’t busy busting my *ss, he was putting cigarettes out on my neck. The world ain’t fair. You’ve gotta take what you need when you can get it. You’ve gotta learn to stand up for yourself. You have to stop being a pussy and kick these kids in the balls or something. Or don’t. Sh*t. I don’t care. Just leave me the hell out of it.”

Thurman Merman: “Want me to fix you some sandwiches?”

Willie T. Soke: “What the f*ck is it with you and fixin’ f*ckin’ sandwiches?”

Shoplifter: “I was going to pay for it.”

15. “I hope that you got my present and that there wasn’t too much blood on it.” – Willie T. Soke

17. “No, I’m an accountant. I wear this f*cking thing as a fashion statement, alright?” – Willie T. Soke

18. “You are by far the dumbest, most pathetic piece of maggot-eatin’ sh*t that has ever slid from a human being’s hairy *ss.” – Marcus

20. Marcus: “It won’t happen again. I can promise you that. Willie here has low blood sugar. That’s all.”

Bob Chipeska: “It’s not just the swearing. Forgive me for prying, but did one of you, um, fornicate—.”

Bob Chipeska: “Yes. With a heavy-set woman in the big-and-tall dressing room?”

Willie T. Soke: “Look, I’ve boned a lot of fat chicks in my time, sure. But, as far back as I can remember, I’ve never fornicated anybody.”

Bob Chipeska: “Yes. Well, even still, I think it’s best for all parties considered if we—.”

Bob Chipeska: “Well, I have somebody else interested in the position.”

Willie T. Soke: “Before you do something stupid you might want to think about this sh*t.”

How Would You React if You Met a Santa Like Willie?

Mall Santas are an institution. Christmas wouldn’t be Christmas without them! After all, it’s already part of everyone’s tradition to go to the mall with their kids, line up to meet Santa, and tell him what they’d like for a present.

It’s a little something that makes every child’s holiday happier, brighter, and more fun. So, just imagine meeting a Santa like Willie. Wouldn’t it be so out of the ordinary?

Bad Santa is Rated R for foul language, sexual innuendos, and even some violence. However, we can’t deny how funny everything is! We’re sure you’ll get a laugh about just the fact that someone like Willie is playing Santa Claus.

This movie takes on a completely different approach from all other Christmas movies. Because of that, it’s become a classic we still quote to this day.

Whenever you need a pick-me-up this Christmas, read through our list of Bad Santa quotes again. We’re sure the lines included in this list will have you laughing until next year’s holiday season!