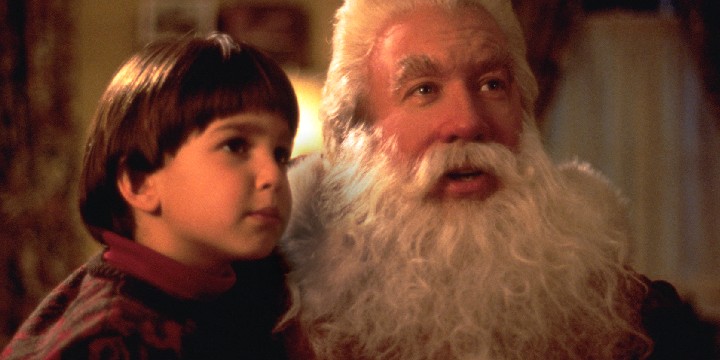 Read these The Santa Clause quotes and ride your reindeer to the North Pole!

Kids see the world differently. It’s much bigger, wider, and infinitely more magical. In their eyes, everything is possible as long as you believe.

However, for adults, it’s the opposite. We’re usually too focused on the logical explanation of things, making it seem like the world’s magic has disappeared. If you feel the same, you better watch The Santa Clause.

It’s a Christmas movie that awakens an adult’s love for the impossible. It’s filled with everything that will remind you of the holidays: snow, gifts, and of course, Santa Claus. However, remember that its lessons are things you can apply in every aspect—and season—of your life, not just Christmas!

And make sure to read these Jingle All the Way quotes and Gremlins quotes.

2. Dr. Neil Miller: “What about Santa’s reindeer? Have you ever seen a reindeer fly?”

Charlie Calvin: “Have you ever seen a million dollars?”

Charlie Calvin: “Just because you can’t see something, doesn’t mean it doesn’t exist.”

3. “Who gave you permission to tell Charlie there was no Santa Claus? I think if we’re going to destroy our son’s delusions, I should be a part of it.” – Scott Calvin

5. Scott Calvin: “You know, I must say, you look pretty good for your age.”

Judy The Elf: “Thanks, but I’m seeing someone in wrapping.”

6. “Can we take a direct flight back to reality, or do we have to change planes in Denver?” – Scott Calvin

Scott Calvin: “And do what?”

Charlie Calvin: “Go down the chimney.”

8. “Where are you gonna get more sweaters after the circus pulls out of town?” – Scott Calvin

10. Dr. Neil Miller: “Scott, what was the last thing you and Charlie did before you went to bed on Christmas Eve?”

Scott Calvin: “We shared a bowl of sugar, did some shots of brown liquor, played with my shotguns, field-dressed a cat, looked for women—I read him a book!”

11. “Sometimes believing in something means you—means you just believe in it.” – Scott Calvin

12. “That is exactly why you want a high-quality fire extinguisher right in the kitchen.” – Scott Calvin

Bernard The Head Elf: “Then I guess the break is over! Back to work. Thanks.”

15. “Charlie, stay away from those things; they are reindeer. You don’t know where they’ve been. They all look like they’ve got the key lime disease.” – Scott Calvin

Larry the Elf: “You are! And I’m not a kid, I have pointy shoes that are older than you. I am an elf.”

Bernard The Head Elf: “What goodbye? Charlie, you still got the glass ball I gave you right?”

Bernard The Head Elf: “Well, all you gotta do is shake it whenever you want to see your dad.”

Bernard The Head Elf: “He can come back to visit anytime, day or night. Hey, have I ever steered you wrong?”

21. “If something should happen to me, put on my suit; the reindeer will know what to do.” – Scott Calvin

22. Scott Calvin: “Why not? What if I don’t buy any of this Santa Clause thing? What if I choose not to believe it?”

Scott Calvin: “Thank you. You’ve grown, too. Now go back to sleep. I think the milk’s a little sour.”

Sarah the Little Girl: “You said you were lactose intolerant.”

Scott Calvin: “I did say that, didn’t I? Thank you for remembering.”

Did You Believe in Santa Clause When You Were Younger?

Because of the world’s harsh reality, it’s easy to forget the magical days we had when we were younger. For many, among those that made their childhood unforgettable would be Santa Claus. Santa is the symbol of the Christmas spirit; frankly, this holiday wouldn’t be the same without him.

In the movie, Charlie says, “Just because you can’t see something, doesn’t mean it doesn’t exist.” Though this line is meant for those doubting Santa’s existence, it can also easily be applied to any aspect of our life.

There are many things in this world that we can’t explain. However, just because we can’t come up with a logical explanation for them, or if we can’t physically see them, does it mean they’re not true?

Magic is embedded in every bit of our lives. We only have to see things through a different lens to recognize them. So, sometimes, let yourself go and be more like a child who sees the infinite possibilities in everything.

No matter how old you get, never forget about the lessons you’ve gotten from Scott, Charlie, and your other favorite characters in The Santa Clause. Remember, the spirit of Christmas—and the spirit of everything you wish to be true—lies inside you!