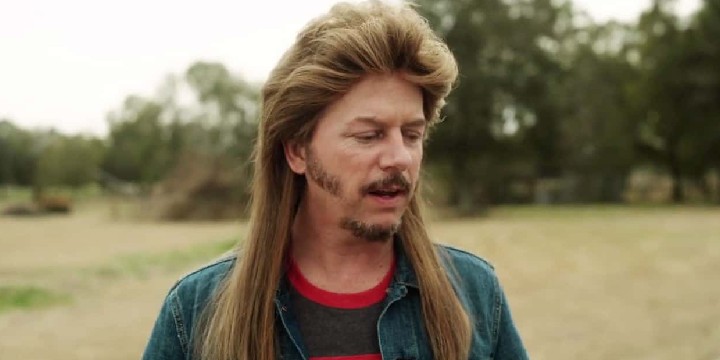 These top 25 Joe Dirt quotes will teach you lessons on perseverance while making you laugh out loud!

Joe Dirt tells the story of a so-called white trash loser named Joe who is searching for his family. However, no matter how sincere he was in his journey, he kept on meeting one obstacle after another.

Most would have already given up at the beginning. But, despite all of his misfortune, Joe does a great job of showing kindness to every person he meets; he’s persistent and determined, too. So, even with all the mishaps, Joe was still blessed to find the real meaning of family and love.

Joe kept going, leading him to a family made up of his close friends. These people will be able to stand by him through the ups and downs and share laughs with him daily. He might not have ended up with his blood relatives, but sometimes, true friends are enough to keep you strong and happy.

Indeed, Joe will make us laugh with his jokes. However, behind the funny scenes is wisdom that will change our perspective. Check out the collection below if you want to fill your day with positive quotes that’ll keep you moving forward!

And make sure to read these My Cousin Vinny quotes and Nacho Libre quotes.

1. “Life is too short to waste doing nothing. Make every day count, because we all don’t know when we will leave this world. Cherish every moment you have with loved ones and never regret anything in life, because everything happens for a reason. Look at every day and smile that God has kept you alive, ‘cause there’s nothing sweeter than life.” – Joe Dirt

2. “But you gotta keep going. I won’t quit. That’s not an option. You gotta keep on keeping on. Life’s a garden, dig it, and make it work for you. You never give up, man. That’s my philosophy. You hear that?” – Joe Dirt

3. “People like that security guard—they don’t really mean what they say. They just got their own issues and whatnot. All I gotta do is keep being a good person. No matter what, good things’ll come my way. Everything will happen for me, as long as I never have ‘no’ in my heart. Right on. Things are gonna happen for me! I’m Joe Dirt.” – Joe Dirt

5. “Is this where you wanna be when Jesus comes back?” – Joe Dirt

6. “You guys got somethin’ to say to me? Why don’t you say it into the microphone? I got a backup mike right here. Check, one, two, testing, testing. Yup, they both workin’, and guess what? They don’t like no feedback, what’s up?” – Joe Dirt

7. “And at that moment I thought I might just lie there and never get up. I would just sit there and rot there, but then I looked up and saw the moon and got this weird feeling that Brandi was looking up at that same moon. Then I realized I had a home all along, in Silvertown.” – Joe Dirt

9. Joe Dirt: “Yeah, man, that little boy, that’s me. My parents were—this was my home. I thought this was it this time.”

Old Cajun Man: “Nah, home is where you make it.”

Old Cajun Man: “Home is where you make it.”

Joe Dirt: “You like to see homos naked, that’s cool man, whatever.”

10. Joe Dirt: “So you’re gonna tell me that you don’t have no black cats, roman candles, or screaming mimis?”

Kickin’ Wing: “No, because snakes and sparklers are the only ones I like.”

Joe Dirt Quotes That’ll Leave an Impact on Every Reader

14. Joe Dirt: “If I told you that you had a beautiful body, would you hold it against me?”

Jill: “Sure would. Do you want to go back to my place?”

Bondi: “I’m done with that fart. You want that?”

Joe Dirt: “Maybe if it came out of Charlene Tilton’s *ss I’d take a bite.”

Bondi: “Yeah, you probably like JR, you queer. I saw your bumper sticker, ‘Cowboy’s butts drive me nuts.’”

Joe Dirt: “Is that right? You think that’s queer? Is this queer? They’re large and in charge and looking for chickies.”

Bondi: “You wanna back that up?”

Joe Dirt: “You wanna fight? Why don’t you stick your head up my butt and fight for air.”

Joe Dirt: “You know I’d love to beat your *ss all up and down this place, but I gotta go back to work.”

18. “You want me to put my ear to the ground and listen for hoof beats, check for footprints, look for broken twigs? This is the modern era. That stuff doesn’t work anymore.” – Kickin’ Wing

19. Joe Dirt: “There are three rules when dealin’ with a deadly alligator. And yes, they are deadly, don’t kid yourself. Rule number one, I’m number one. You hear that, I like the kid around. Rule two, the croc’s number two. Now before I begin—.”

Kid at Gator Farm: “So you don’t know rule three?”

Joe Dirt: “Yeah, you want a match? My face and your *ss! How about that friend, huh? I mean, your *ss and my face, what’s up? Here we go; I’m a bit of a crocophile, so don’t try this at home. This here’s Rocky, and he ain’t no puppy. Now, let’s see if Rocky’s got some cavities. This m*f* knows not to mess with Sir Joseph Dirt. Oh, when bad pets go bad, dang. It’s like the cartoons, I’m seeing all ‘tweet, tweet.’”

Charlene: “Joe, what can I do for you? You’re not making any sense.”

Joe’s Little Sister: “That’s why Dad named you Joe Dirt instead of Nunamaker.”

Joe Dirt Quotes for a Glimpse Into the Movie’s Plot

22. “Well, I was born without the top of my skull, and I guess a little bit of my brains was showin’ and it was grossin’ everybody out, so my mom put this wig on me to cover it up, and then the bones grew together, and it got all infused and entwined. I mean I don’t mean to get all scientific with you.” – Joe Dirt

24. Joe Dirt: “Why did you do that to me? I was only eight years old, I was just a little kid. Do you have any idea what it’s like to be a kid and have nobody around to talk to? No one that cares if you’re alive or dead? Every day you just think you’re worthless and there’s a void in your life?”

Mrs. Nunamaker: “Lose that frown. When you’re down, stare at a clown.”

Mr. Nunamaker: “Hey! What the hell are you doing?”

Mr. Nunamaker: “Hey, you’re grounded! Where are you all going? Hey, come on! You don’t have to follow him just because he’s going.”

Did Joe Dirt Give You the Positivity You Need to Move Forward in Life?

Joe Dirt’s central message is crystal clear: we must keep going. Despite the problems Joe encounters, he always finds ways to get through his situations. So, if he survived childhood abandonment, constant bullying, and many more, so can we.

We should keep moving forward no matter how endless and complex the obstacles are. Yes, life is full of problems that’ll make us suffer, but we can’t let setbacks take us down. Remember, persistence is essential, and Joe shows us how it all pays off in the end.

In addition, don’t be discouraged when the end of your journey leads you down a different path than initially planned. Life is like that; you’ll never be 100% certain how it turns out. So, be persistent and always look forward!

Hopefully, this collection was able to inspire you to push through whatever obstacle you have in life. Life will continue to move on with or without you. So, always choose to make the most out of every day!