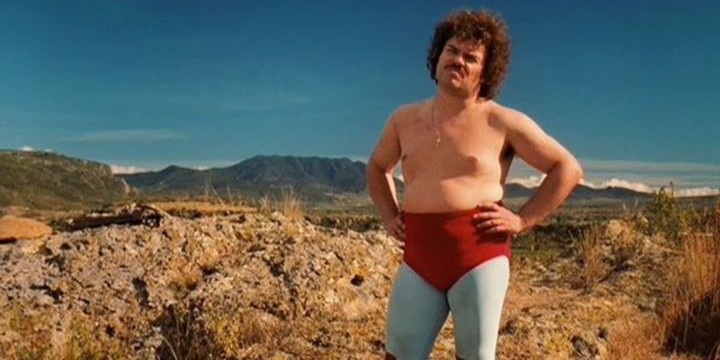 If you are struggling to remain inspired throughout the day, then these Nacho Libre quotes we’ve gathered are for you!

Nacho Libre is a sports comedy-drama based on a real-life story. It’s a story about a monk who is hiding as a professional wrestler to earn money.

He joins wrestling secretly to help the orphan with their needs and to win the heart of a nun that he cares deeply about.

Nacho Libre is not your typical superhero, but you will definitely fall in love with him because of his good and big heart.

Learn more about this strong man through reading these quotes that we’ve collected.

And don’t forget to check out these Sling Blade quotes and School of Rock quotes.

1. “I saw a bum here. I saw a bum here, there were two bums actually. And I said to myself, ‘Let’s talk to these guys about the Gospel.’” – Nacho Libre

3. “I am the gatekeeper to my own destiny and I will have my glory day in the hot sun.” – Nacho Libre

4. “I’m not listening to you! You only believe in Science. That’s probably why we never win.” – Nacho Libre

5. “Don’t you want a little taste of the glory? See what it tastes like?” – Nacho Libre

6. “I mean, yes! They may have the appearance of riches. Beneath the clothes, we find a man. And beneath the man, we find his nucleus.” – Nacho Libre

8. “But sister, they are just ninos trying to release their wiggles.” – Nacho Libre

9. “I’m a little concerned right now about your salvation and stuff.” – Nacho Libre

10. “You gotta be kidding me. Everything you just said is my favorite thing to do, every day!” – Nacho Libre

11. “Chancho. When you are a man, sometimes you wear stretchy pants in your room.” – Nacho Libre

14. “Okay, orphans! Listen to Ignacio. I know it is fun to wrestle. A nice pile-drive to the face or a punch to the face, but you cannot do it. Because it is in the Bible not to wrestle your neighbor.” – Nacho Libre

15. “I thought you hated all the orphans in the whole world.” – Nacho Libre

16. “Do you remember when everyone was shouting my name, and I used my strength to rip my blouse.” – Nacho Libre

17. “When the fantasy has ended, and all the children are gone, something good inside of me helps me to carry on.” – Nacho Libre

20. “It was stinky. But these are my recreational clothes.” – Nacho Libre

21. “If you fight for something noble, or for someone who needs your help, only then will God bless you in battle.” – Nacho Libre

23. “Would you like to join me in my quarters this evening for some toast?” – Nacho Libre

24. “This man lived a good life. He had a wonderful woman, a lush garden, and a collection of Russian nesting dolls. May he rest in peace.” – Nacho Libre

28. “Precious Father, why have you given me this desire to wrestle and then made me such a stinky warrior?” – Nacho Libre

33. “Tonight, I will fight the seven strongest men in town, maybe the world. And I will win because our heavenly father will be in the ring with me. And he and I will win 10,000 pesos.” – Nacho Libre

35. “I don’t believe in God. I believe in science!” – Steven Esqueleto

38. “How come you think? I used to really like Ramses. I wanted to become him!” – Nacho Libre

39. “Okay. Maybe I am not meant for these duties. Cooking duty. Dead guy duty. Maybe it’s time for me to get a better duty!” – Nacho Libre

40. “Do you not realize I have had diarrhea since Easters?!” – Guillermo

41. “Those men fight for vanity, for money, for false pride.” – Nacho Libre

42. “In order for you to become empowered by the eagle, you must climb that cliff, find the egg, crack open one of them, and then eat the yolk.” – Nacho Libre

43. “But tonight, we’re going up against Satan’s Cavemen and I thought it would be a good idea if you stand next to Esqueleto and push his head in the bowl which comes back up quickly. Praise the Lord!” – Nacho Libre

44. “You son of a bitch! So what, I’m only a wrestler. I hope you have Ramsey’s seat on your face until eagle eggs come out!” – Nacho Libre

45. “You gave them permission to hurt me like this.” – Steven Esqueleto

46. “My favorite color is light tan. My favorite animal is puppies. I like serving the Lord, hiking, playing volleyball.” – Sister Encarnación

49. “My father was a deacon in Mexico, and my mother a Lutheran missionary from Scandinavia.” – Nacho Libre

50. “Wrestling is ungodly, Ignacio. People cheer for him and he is a false idol.” – Sister Encarnación

51. “I need professional help. I need Ramses!. He’s the baist. I must learn his hwaaaays.” – Nacho Libre

56. “They tried to convert each other, but got married instead. Then they died.” – Nacho Libre

57. “Some people say wrestlers make bad lovers, that they save themselves for the ring. Love you.” – Lady

67. “So, what you’re saying to me is if I can eat this yolk, my moves will become the best in the whole world.” – Nacho Libre

70. “Ramses’ number one he knows the secret of desire. Ramses is the one, he puts the people all on fire.” – Nacho Libre

77. “But you’re tall and fast like a gazelle, you can do it. Pray to the Lord for strength.” – Nacho Libre

79. “See that guy over there? That is Senior Ramon, he owns all the big arenas. We need to show him that we mean business. That we are ready for the ‘big leagues.’” – Nacho Libre

81. “And over there in the tree, is a chipmunk nest. And that right there, is our corn, the best in the city, it’s delicious. And that is a crazy lady. So now you pretty much know what I do. Pretty dang exciting, huh?” – Nacho Libre

82. “Uh, Ramses. I was wondering if the children could have a signature or a picture or something?” – Nacho Libre

86. “Tonight, I felt something deeper inside me that I never felt before!” – Nacho Libre

92. “There is no flavor. There are no spices. Where are the chips?” – Guillermo

95. “These are my recreation clothes.” – Nacho Libre

96. “Nacho, I know someone who can help you.” – Steven Esqueleto

97. “I hate all the orphans in the whole world!” – Steven Esqueleto

99. “Where are we going, Ignacio?” – Sister Encarnación

Did These Nacho Libre Quotes Inspire You to Help Others as Well?

Nacho Libre is an indie blockbuster and incredible movie. A story of a young man who works as a cook in the orphanage where he grows up. A person who is unhappy with his situation and longing for some respect from others.

Being an orphan himself, he got fond of taking care of the orphans and learning to love them. He notices that the orphanage is struggling financially, so he secretly joins the wrestling competition to help feed the children. He got his strength to win the competition from the children and the nun that he truly cared for.

Nacho Libre will teach us one or more lessons about life. We need to accept that life sometimes sucks! But we need to go forward, and we need to keep our head up high and embrace it.

The life we have right now is a choice. Whether we live a happy life or a miserable one, it’s up to us, as long as we never step on someone else’s life.

Which of these Nacho Libre quotes is your favorite? Please leave them in the comment section below.