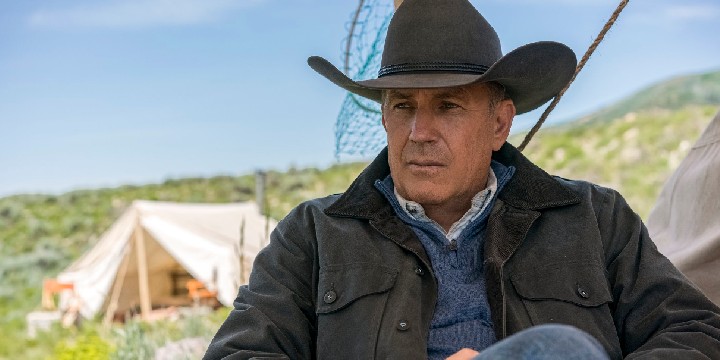 These John Dutton quotes will help you recognize the things worth fighting for in life!

John Dutton is the patriarch of the Dutton ranching dynasty. He is a stoic who follows a strict code of honor. He is formidable and ruthless but knows the value of family and life.

John’s life has been difficult, but he persisted, leaving a legacy for his family that will last generations. So, if you enjoy family drama and want to learn more about John Dutton’s life principles, make sure you read the list below!

And don’t forget to check out these Beth Dutton quotes and Yellowstone quotes.

1. “No one has a right. You have to take a right or stop it from being taken from you.”

2. “The whole world’s a test, son. Don’t let them ever trick you into thinking differently.”

3. “Learn to be meaner than evil and still love your family and enjoy a sunrise.”

4. “All right, drive your polluted soul back to the city where it belongs.”

5. “Living day to day isn’t living, Monica, it’s surviving with no regard for tomorrow.”

6. “Leverage is knowing that if someone had all the money in the world, this is what they’d buy.”

8. “Your grandfather used to say you can’t fix a broken wagon wheel, but you can use the parts to make a new one.”

10. “You have every right to your land and assets.”

11. “That rifle has the power to take a life. Whatever you point it at. You know that, right ?”

12. “You realize you ain’t dead, and you’re not gonna die, and you gotta face all the decisions you made. And out of all that you gotta figure out how to let yourself start living again.”

14. “Lloyd, I’ve come to the conclusion that the only thing on this earth that can kill me is me.”

15. “It’s the one constant in life. You build something worth having, someone’s gonna try to take it.”

18. “Lawyers are advocates for legal action through words.”

20. “Lawyers are the swords of this century. Words are weapons now. I need you to learn how to use them.”

21. “You want to be me someday? Then become something that can help me protect this place.”

25. “We’re with the Yellowstone. Nobody’s gonna mess with us.”

26. “I guess everyone thinks I’m the dumbest man in the valley. You can hold her damn hand, Rip.”

28. “Ranching is only business for goals to break even.”

29. “Yeah, but you can’t sell this. You gotta earn it; you gotta live it, and that’s what they’ll never understand.”

32. “That you thought you couldn’t come to me. That you thought I’d be ashamed or you’d be in trouble for it or whatever you thought. I’m the one safe person in this world that you can turn to, Beth, for anything, and it breaks my heart that I didn’t make you know that.”

34. “There’s always a choice. You coulda jumped in the river. But hurtin’ yourself never entered your mind, did it?”

John Dutton Quotes on Sticking to Your Principles and Promises

37. “If Walker’s such a problem, what’s he still doin’ here? You’ve enforced the rules of this ranch for 30 years, Lloyd. For you to be the one to break ’em what do you think that says to everybody else? It’s your last chance, but if you blow it, Lloyd. You understand?”

39. “You’re a good man, Kayce. Sometimes, good men have to do real bad things. It doesn’t change who you are.”

40. “I can’t. I never had much luck leadin’ men and bein’ their friend. Maybe it can be different for you.”

41. “Maybe you haven’t noticed, but there is a war going on in this valley. Today’s the day you choose sides.”

42. “A little curveball from the reservation. That land is mine, and no one can sell it but me.”

43. “I never wanted that office, Beth. I just wanted the control. I still have that.”

44. “My God. There are no good choices in a situation like this, Steve.”

John Dutton: “Well, we’re about to find out what that’s worth.”

46. “You know, the thing about suicide, you don’t just kill yourself, you kill every memory of you. This will be all everyone remembers, Jamie. Every second you spent on this earth will be reduced to how you chose to leave it. No one will mourn your loss, son, because this isn’t losing your life, this is quittin’ it.”

47. “So I guess the only question is how cute does an animal have to be before you care if it dies to feed ya.”

48. “His whole life’s in your hands now, Tate. How you treat him is how his life goes.”

49. “Well, there shouldn’t be things like that to discuss in the first place. But that’s life. In case you haven’t noticed, it is cruel and uncaring. You can’t reason with evil, son. Evil wants what it wants, and it won’t stop until it’s won or you kill it. To kill it means to be meaner than evil.”

50. “Yeah, something will kill us, too, Tate. It might be a bacteria so small you need a microscope to see it. It might be a big old bear. There’s no such thing as dying of old age. Something kills us all.”

51. “Makes you wonder the point of it all. Findin’ someone you love so much just to lose ’em. Like to believe there’s a plan to it all, but I don’t see a plan.”

52. “Well, happy’s all I ever wanted for you, sweetheart. You give him your hand if he gives you that.”

53. “I’m feelin’ a little sentimental, grandson; I’d like to see that little elk live. What do you say we tip the scales in his favor?”

54. “I need to make an amendment to the trust, Beth. Read this, and then do what it asks. I know who loves me. I know who’s loyal. I always have.”

55. “We’re about to find out how big a role you play in this family, son. You understand what I’m asking.”

57. “My family and I find ourselves in an interesting situation.”

59. “Someday your son’s gonna test you. He’s gonna force you to make a decision that not only determines his future but your place in it.”

60. “Anything else you feel like discussin’? If you’re joining the family, can you please be the one person in it who f*ckin’ talks to me?”

61. “What happens in 30 years, Jamie? When you and your brother and your sister are too old to fight for this place, and Tate has to fight for it on his own?”

62. “Rip living in the bunkhouse is something you can overcome if that’s what you choose to do, Beth.”

64. “Expensive taste runs in the blood.”

66. “When’s the last time you watched the sunset, Governor?”

67. “I think they call that coveting in the bible.”

68. “There’s a saying out here. If your daughter’s riding a horse, no one’s riding her.”

71. “Yeah, well I have this new rule. I only carry my phone in places with no service, otherwise, that son of a b*tch stays on the kitchen counter.”

72. “I don’t believe in luck, but I sure believe in stupid cause’ you prove it every f*ckin’ day!”

73. “No one wants to merge with you. You have a three-to-one debt ratio. It’d be easier to sell VCRs.”

Beth Dutton: “Oh, Dad. The blush was f*cked out of me years ago.”

John Dutton: “Jesus. Baby, I love our man-to-man talks, but we need to set some godd*mned boundaries here. I can’t unhear that, honey.”

John Dutton: “Are there problems? Everywhere I turn, son.”

79. John Dutton: “Kayce! If you find anything, don’t confront anyone. Call the sheriff for backup. Everything by the book.”

John Dutton: “Well, that’s why you call the sheriff son; it’s their book.”

80. “Waddya say? Care to send me to heaven before I park your sorry *ss in hell?”

81. “This field’s mine. That fence is mine. You damaged both, and you came back to damage it more. This is my home. If I did this to your home, what would you do?”

82. “You should have gone to the sheriff, Dan. You ain’t getting cut down next time, ’cause next time, I’m doing it myself.”

84. “As if something can happen on the ranch that I don’t know about. Jesus Christ.”

85. “No one’s alone on this ranch. There are a dozen wranglers down here, or there’s supposed to be. Where the hell have you been?”

86. “I’m gonna leave these holes just like this, right here in the middle of my field. And if you ever come back here again, I’m gonna fill ’em. Understand?”

87. “The Becks have their own plane. Is that useful information to a soldier?”

88. “Well, I’m not gonna help you with the problem that prevents you from buildin’ the casino. I don’t want a casino any more than I want an airport.”

90. Dan Jenkins: “I don’t see the logic in attacking all three of us.”

John Dutton: “They want you to leave. They want him to quit building.”

Are You a Fan of Yellowstone’s Main Character, John Dutton?

Yellowstone’s main character, John Dutton, is the protagonist of both the novel and the television series. In the story, he has been a rancher his entire life and owns a ranch in Montana. Kevin Costner played the older version of John Dutton, while Josh Lucas played the younger version in the TV series.

He is in charge of one of the most extensive cattle operations in the United States and is well-known for his hard work and honesty. As the man of the house and a widower, John’s responsibility to keep the ranch and his family together appears to be a significant challenge for him.

John Dutton’s enemies tirelessly put him to the test, but he continues to fight for his family and the people of the valley. In the face of adversity, he sticks to his principles to protect the ranch and the things that matter in life the most. So, let these quotes inspire you to stand your ground in the face of adversity and to always put love and family first.

Which of these John Dutton quotes is your favorite? Please, let us know in the comments area.