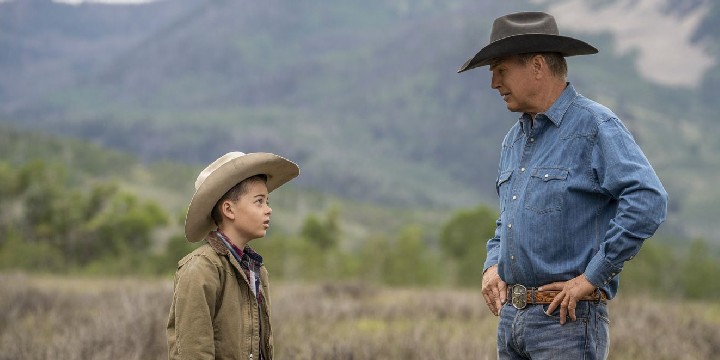 Yellowstone is a drama series that debuted on June 20, 2018. It follows the Dutton family, who owns and operates Yellowstone Ranch, the largest continual ranch in the United States.

Unlike the usual TV series, it has a lot of deep and meaningful lessons embedded in each episode. So, for those who haven’t watched it yet, we’re sure that this list will push you to turn on your TV and get right into the first episode!

3. “We like to think we ain’t animals. Like we’ve evolved into something different. Prison teaches you we haven’t.” – Walker

4. “When the misery is bad enough, tomorrow is rarely factored into decisions.” – Monica Dutton

6. “The whole world’s a test, son. Don’t let them ever trick you into thinking differently.” – John Dutton

7. “There’s no greater failure than a parent outliving their child because it’s the one failure that you just can’t ever overcome.” – Danny Huston

8. “Living day to day isn’t living, Monica, it’s surviving, with no regard for tomorrow.” – John Dutton

9. “God sure finds interesting ways to put people out of business.” – Kayce Dutton

10. “Someday your son’s gonna test you. He’s gonna force you to make a decision that not only determines his future but your place in it.” – John Dutton

Iconic Yellowstone Quotes to Inspire You

11. “Lawyers are the swords of this century. Words are weapons now. I need you to learn how to use them.” – John Dutton

13. “My whole life’s just a long series of losing things I love. I’m not gonna lose this one, Rip. Not this one.” – John Dutton

16. “Serve your father’s family or serve your own. Like it or not, that choice is coming.” – Christina

17. “I see things in people, and I feel like if I can touch it, even if the rest of the person is rotten, I can take that good thing and make it part of me.” – Beth Dutton

18. “Your grandfather used to say you can’t fix a broken wagon wheel, but you can use the parts to make a new one.” – John Dutton

19. “You realize you ain’t dead, and you’re not gonna die, and you gotta face all the decisions you made.” – John Dutton

21. “We’re with the Yellowstone. Nobody’s gonna mess with us.” – Jimmy Hurdstrom

23. “Learn to be meaner than evil and still love your family and enjoy a sunrise.” – John Dutton

25. “I’d rather kill a thousand men than shoot another horse.” – Rip Wheeler

26. “I have every right to be here. Every right. I have a right. This is America.” – Danny Huston

Funny Yellowstone Quotes That Will Make You Laugh

28. “I hope I never meet the first one who thought it was a good idea to ride a bull.” – Carl Reynolds

29. “Every now and then, you say something that makes me think you’re smart, and then I look at you and that thug’s face.” – Beth Dutton

32. “The only reason you’re not choking on irony is the size of your mouth.” – Beth Dutton

36. “There are sharks and minnows in this world. If you don’t know which you are, you ain’t a shark.” – Rip Wheeler

38. “When all this is over, I’m gonna hang your diploma above my toilet in my guest house. You have my word.” – Beth Dutton

39. “We need to find a less subtle means of expressing our displeasure.” – Malcolm Beck

40. “There’s a saying out here. If your daughter’s riding a horse, no one’s riding her.” – John Dutton

41. “You can’t unmake family, Jamie, but you can take their gold card.” – Beth Dutton

Yellowstone Quotes to Give You Essential Life Lessons

42. “No one will mourn your loss, son, because this isn’t losing your life; this is quitting it.” – John Dutton

47. “Where’s the fun in wrecking a single man? When I break you, I want to know I’m breaking generations.” – Beth Dutton

48. “Everything I do is for him, and everything you do is for you.” – Beth Dutton

50. “I’m gonna give you one last chance. You leave now or you never leave.” – Rip Wheeler

55. “Look, it’s a horrible thing to say, but the best thing for this world is if he goes to sleep tonight and doesn’t wake up in the morning.” – Sheriff Haskell

56. “The rifle has the power to take a life. Whatever you point it at. You know that, right?” – John Dutton

57. “It’s the one constant in life. You build something worth having, someone’s gonna try to take it.” – John Dutton

58. “Leverage is knowing that if someone had all the money in the world, this is what they’d buy.” – John Dutton

61. “Cancer doesn’t have much foresight, so it kills its hosts, which kills it. Cancer is suicide from the inside out. That’s what you are, Beth.” – Rip Wheeler

62. “You know, the thing about suicide, you don’t just kill yourself, you kill every memory of you.” – John Dutton

63. “My mother was the spine of this family. She was the center. And without her, he’s, well, the best of him died with her.” – Beth Dutton

64. “You ever have a girl look at you, and your whole world just stops?” – Jimmy Hurdstrom

65. “I made two bad decisions in my life based on fear, and they cost me everything.” – Beth Dutton

66. “Well, that’s what it means. It means that you have me, that I’m yours. It means come live your life with me. The only thing I ask is that you outlive me so I never live another day without you.” – Beth Dutton

68. “I have been down this road many, many times before, buddy. And no one who tried it is alive to tell you how poorly that worked out for them.” – Beth Dutton

69. “I look at every day with you as a gift. My tomorrows are, well, they’re all words. There’s no word I’d rather call you if that’s what you want.” – Rip Wheeler

71. “In your imagination, you barely know him! You miss what you thought you were, that’s all. You’ll miss that whether you’re alive or not.” – Garrett Randall

72. “Boy, get over here. The only painless way to learn this lesson is to watch it.” – Rip Wheeler

73. “Thank God. Coffee. A pour-over? God bless you. The best measure of progress in a town is decent coffee.” – Christina

74. “There ain’t no such thing as luck, but I sure believe in stupid cause’ you prove it every f*ckin’ day!” – Rip Wheeler

75. “I am never early, and I am never late. I am the constant your time adjusts to.” – Caroline Warner

77. “I am the rock therapists break themselves against.” – Beth Dutton

78. “I think she can make Montana the fastest-growing state in the nation. Behind every milestone of human history stands a monster, and that’s our monster.” – Caroline Warner

79. “You’re a good man, Kayce. Sometimes, good men have to do real bad things. It doesn’t change who you are.” – John Dutton

80. “You know, you did something that no one does, Rip. You’ve outlived your past.” – Lloyd Pierce

What Life Lessons Did You Get From the Dutton Family?

The story begins with Yellowstone Ranch going toe-to-toe with the Broken Rock Reservation. They believe they can still claim rights to a large part of the Dutton family’s land and the livestock that lives on it.

The rest of the series follows the Dutton family’s slow downward spiral. While John is leading the charge against Broken Rock, he also has to keep an eye on a land developer who’s on a mission to buy out their land.

Beyond these issues, the series delved deep into fighting and standing for the essential things in life. Family feuds, power struggles, and patriarchal rebellion are only the tip of the iceberg!

The Dutton family proves how far a family will go and what they will sacrifice for the sake of what matters most. Remember that whatever happens in life, your family are the only ones who will be with you through thick and thin. So, whenever you need a reminder of the essential things in life, feel free to reread our collection!

Which quotes from Yellowstone are your favorites? Have you watched any of the episodes? Join the discussion below!