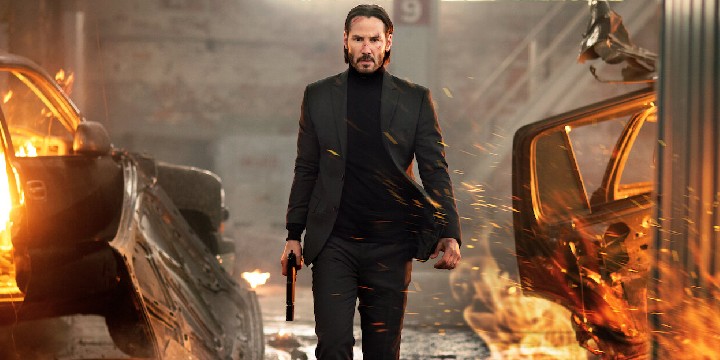 Aside from its incredible action-packed scenes, these 110 John Wick quotes are also worth remembering!

The intense killing game began when John Wick, a retired hitman, sought revenge for the death of his puppy.

We’ve compiled some of his most profound and meaningful lines from the franchise.

Be inspired by his bravery, powerful personality, and the lessons ingrained in each characters’ lines.

And make sure to check out these Keanu Reeves quotes and Rambo quotes.

1. “There’s no rhyme or reason to this life. It’s days like today scattered among the rest.” – Marcus

5. “This life follows you. It clings to you. Infecting everyone that comes close to you. We are cursed, you and I.” – Viggo Tarasov

6. “No wife, no dog, no home. You have nothing, John. Vengeance is all you have left.” – Santino D’Antonio

7. “You stabbed the devil in the back. To him, this isn’t vengeance; this is justice.” – Winston

11. “John is a man of focus, commitment, sheer will—something you know very little about. I once saw him kill three men in a bar—with a pencil, with a f*ck*ng pencil. Then suddenly, one day, he asked to leave. It’s over a woman, of course. So I made a deal with him. I gave him an impossible task. A job no one could have pulled off. The bodies he buried that day laid the foundation of what we are now. And then my son, a few days after his wife died, you steal his car and kill his f*ck*ng dog.” – Viggo Tarasov

12. “The knife is in your aorta. You pull it out, you will bleed and you will die. Consider this a professional courtesy.” – John Wick

13. “Nothing’s ever just a conversation with you, John.” – Sofia

14. “When Helen died, I lost everything. Until that dog arrived on my doorstep. A final gift from my wife. In that moment, I received some semblance of hope. An opportunity to grieve unalone. And your son took that from me—stole that from me—killed that from me! People keep asking if I’m back. And I haven’t really had an answer. But now, yeah, I’m thinkin’ I’m back! So you can either hand over your son, or you can die screaming alongside him!” – John Wick

18. “You stabbed the devil in the back and forced him back into the life that he had just left. You incinerated the priest’s temple. Burned it to the ground. Now he’s free of the marker, what do you think he’ll do? He had a glimpse of the other side and he embraced it.” – Winston

19. “Listen to me. What is this? Hmm? Do you remember? This is your blood. You came to me. I helped you. If you don’t do this, you know the consequences.” – Santino D’Antonio

22. “I can assure you that the stories you hear about John Wick—if nothing else—have been watered down.” – Abram

23. “John, I’m sorry I can’t be there for you. But, you still need something, someone to love, so start with this. Because the car doesn’t count. I love you, John. This illness has loomed over us for a long time and now that I have found my peace, find yours. Until that day, your best friend, Helen.” – Helen

24. “Well, since you see it that way, I guess it’s time I told you to climb down off your High Table and go f*ck yourself.” – Bowery King

25. “Seven cuts. Under the table is where sh*ts get done. And they’re about to find out, if you cut a king, you better cut him to the quick. So—let me ask you, John. How do you feel? ‘Cause I am really pissed off. You pissed, John? Are you?” – Bowery King

27. “Okay. You made your point. You have earned my fealty. Matter of fact, I’m gonna shove so much fealty up your *ss it’s gonna come spilling out of your mouth.” – Bowery King

28. “Fourteen million dollar bounty on his head and every interested party in this city wants a piece of it. I say the odds are about even.” – Winston

29. “Welcome to my Mission Control. Brain stem of my operation. The information super flyway. From whence I control the word on the street, the way of the world.” – Bowery King

30. “Have you thought this through? I mean, chewed it down to the bone? You got out once. You dip so much as a pinky back into this pond, you may well find something reaches out and drags you back into its depths.” – Winston

36. “You think you can take John Wick? You got a nasty surprise coming.” – Bowery King

37. “The path to paradise begins in hell.” – The Director

38. “Oh yes. As a matter of fact, the body gets colder within these very walls.” – Winston

39. “You’ve known Mr. Wick for a great many years. It might even be fair to call you friends, yes? Instead of stopping him, instead of killing him, you stood by and let him walk away after he shot Santino D’ Antonio in front of you.” – The Adjudicator

45. “Your descent into hell begins here, Mr. Wick. Earl will guide, do be careful on your way down. Oh, and remember, you owe me.” – Bowery King

46. “Duly noted. You gave John Wick seven bullets, your penance will be paid with seven cuts.” – The Adjudicator

48. “Let us not resort to our baser instincts and handle this like civilized men to move on.” – Viggo Tarasov

50. “Your membership to the Continental has been—by thine own hand—revoked.” – Winston

53. “You gentleman, of course, realize that was the first wave. Merely an amuse-bouche. We can keep this up as long as you’d like, but it only ends one way.” – The Adjudicator

56. “I know what you’re thinking, Jonathan. We live by a code. Which is why I’m not the one telling you that a certain helicopter on a certain helipad is being fueled for a certain someone.” – Winston

57. “Your ticket is torn. You may never return home.” – The Director

Heavy John Wick Quotes to Keep You Immersed in the Story

66. “Consider your origins. You were not made to live as brutes, but to follow virtue and knowledge.” – Ernest

67. “What would your Helen think about you?” – Gianna D’ Antonio

68. “I have been looking forward to meeting you for a long time. And so far, you haven’t disappointed.” – Zero

70. “Let it be known the Bowery will honor the excommunicado. No help. No services of any kind.” – Bowery King

71. “Even if I wanted to, I can’t help you, Jardani. The High Table wants your life. How can you fight the wind? How can you smash the mountains? How can you bury the ocean? How can you escape from the light? Of course, you can go to the dark. But, they’re in the dark too. So tell me, Jardani, what do you really want?” – The Director

75. “If I make one mistake, one enemy, maybe somebody goes looking for my daughter. And I know what you did, John, to get her out. But, that’s not a chance I can take. Sorry.” – Sofia

76. “You know, when my pupils first come here, they wish for one thing—a life free of suffering.” – The Director

81. “Well, John wasn’t exactly the Boogeyman. He was the one you sent to kill the f*ck*ng Boogeyman.” – Viggo

85. “Iosef, Iosef! Listen! Huh? John will come for you, and you will do nothing because you can do nothing, so get the f*ck out of my sight!” – Viggo

John Wick Quotes That Will Spark Your Interest

87. “There is a task. It involves someone who broke the rules and stood against the Table.” – The Adjudicator

88. “Now, as I recall, weren’t you the one tasked to dole out the beatings, not to receive them?” – Winston

89. “You’re going to die, John. Whether out here on this desert, or somewhere else down the road. But, you are going to die.” – Sofia

91. “The cost of your life will be the death of others. The first of which will be the man they call Winston.” – The Elder

93. “And you, will you be putting a bullet in his head.” – The Adjudicator

96. “Very well, my son. Cast aside your weakness and reaffirm your fealty to the Table.” – The Elder

97. “I have served and been a beacon of order and stability to our industry for over 40 years. Now, I humbly acknowledge I overstepped and repledge my fealty to the High Table.” – Winston

99. “Under the circumstances, your privileges are reinstated immediately. What do you need?” – Winston

100. “The contract has gone international. You have no idea what’s coming.” – Winston

What Are Your Thoughts on John Wick’s Personality?

The John Wick franchise is well-known for being realistic. John Wick fought the world’s top hitmen and women with the fierceness that made him a true underworld hero.

The film demonstrated how strong the desire for vengeance could be when confronted with emotional pain. John Wick taught us the importance of sticking to the rules and finding success and fulfillment.

Everyone should be treated with courtesy and respect. In a world where crime appears to be on the rise, we must take precautions because we never know who we are dealing with.

Which quotes are your favorites? We’d love to hear your thoughts in the comments section!