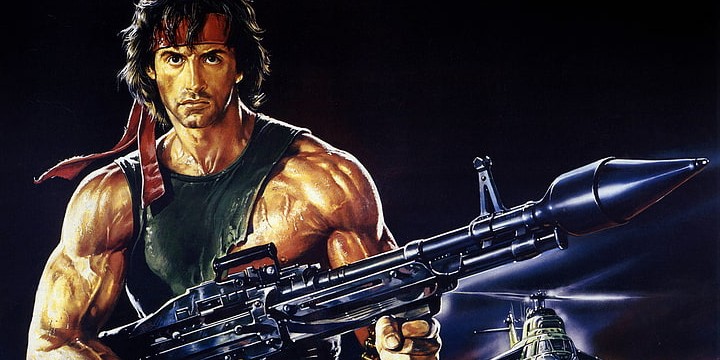 If you’re a fan of action movies with lots of life lessons, you’ll regret missing out on this list of the best Rambo quotes!

Our world is kept safe with the help of our soldiers. However, do we really understand the depths of their sacrifice and pain? We might think we know how hard it is to fight a war, but we will never truly understand how dark and bleak life is for those who face it.

This is the central premise behind the story of Rambo, a movie series about a United States Army Special Forces veteran and his demons. John Rambo is a trained killer and protector. But, after the Vietnam War, he’s left powerless due to the trauma that he experienced.

In the movie, Rambo is forced to relive his traumatic life during the Vietnam War when a local sheriff pestered him. But, however hard it was for him to live as an outcast, he continued to fight to live for another day.

To learn more about Rambo’s struggles and what you can learn from them, check the quotes below. The lines we’ve included below will not only send chills down your spine from all the action but also provide you with meaningful insights.

And don’t forget to check out these Rocky Balboa quotes and Sylvester Stallone quotes.

1. “Any of you boys want to shoot, now’s the time. There isn’t one of us that doesn’t want to be someplace else. But this is what we do, who we are. Live for nothing, or die for something. Your call.” – John Rambo

3. “I want them to know that death is coming, and there is nothing they can do to stop it.” – John Rambo

4. “I’ve lived in a world of death. I tried to come home, but I never really arrived. A part of my mind and soul got lost along the way, but my heart was still here where I was born, where I would defend to the end the only family I’ve ever known, the only home I’ve ever known. All the ones I’ve loved are now ghosts. But I will fight to keep their memory alive forever.” – John Rambo

5. “We’re like animals! It’s in the blood! It’s natural! Peace? That’s an accident! It’s what is! When you’re pushed, killing’s as easy as breathing. When the killing stops in one place, it starts in another, but that’s okay, ‘cause you’re killing for your country. But it ain’t your country who asks you; it’s a few men up top who want it.” – John Rambo

6. “I want what they want, and every other guy who came over here and spilled his guts and gave everything he had wanted—for our country to love us, as much as we love it.” – John Rambo

7. Sheriff William Teasle: “Whatever possessed god in heaven to make a man like Rambo?”

Colonel Samuel Trautman: “God didn’t make Rambo. I made him.”

8. John Rambo: “You’re not changing anything.”

Michael Burnett: “Well, it’s thinking like that that keeps the world the way it is.”

John Rambo: “Nothing is over! Nothing! You just don’t turn it off! It wasn’t my war! You asked me, I didn’t ask you! And I did what I had to do to win! But somebody wouldn’t let us win! And I come back to the world, and I see all those maggots at the airport, protesting me, spitting. Calling me baby killer and all kinds of vile crap! Who are they to protest me, huh? Who are they? Unless they’ve been me and been there and know what the hell they’re yelling about!”

Colonel Samuel Trautman: “It was a bad time for everyone, Rambo. It’s all in the past now.”

John Rambo: “For you! For me civilian life is nothing! In the field we had a code of honor, you watch my back, I watch yours. Back here there’s nothing!”

Colonel Samuel Trautman: “You’re the last of an elite group, don’t end it like this.”

John Rambo: “Back there I could fly a gunship, I could drive a tank, I was in charge of million-dollar equipment; back here I can’t even hold a job parking cars!”

Rambo Quotes to Give You Goosebumps

12. “You’re not hunting him. He’s hunting you.” – Colonel Samuel Trautman

John Rambo: “I said why you pushing me? I haven’t done anything to you.”

Sheriff William Teasle: “First of all, you don’t ask the questions around here. I do. Understand? Second, we don’t want guys like you in this town, drifters. Next thing we know, we got a whole bunch of guys like you in this town. That’s why! Besides, you wouldn’t like it here anyway. It’s just a quiet little town. In fact, you might say it’s boring. But that’s the way we like it. I get paid to keep it that way.”

15. Colonel Samuel Trautman: “Well you did some pushing on your own John.”

John Rambo: “They drew first blood, not me.”

John Rambo:” Got himself killed in ‘Nam, didn’t even know it. Cancer ate him down to the bone.”

19. Major Marshall Roger T. Murdock: “Rambo, this is Murdock; we’re glad you’re alive. Where the hell are you? Give us your position, and we’ll come to pick you up!”

John Rambo: “Murdock. I’m coming to get you!”

20. “Teasle, you and all your men couldn’t handle him before. What makes you think you can handle him now? Only God knows what damage he’s prepared to do.” – Colonel Samuel Trautman

21. “I see you are no stranger to pain. Perhaps you have been among my Vietnamese comrades before, hm? No answer. Do you wish to give your name? Now, what possible harm can that cause? Pride is a poor substitute for intelligence. What you must understand is that we have to interrogate you.” – Lieutenant Colonel Sergei T. Podovsky

22. “You know what you are—what you’re made of. War is in your blood. Don’t fight it. You didn’t kill for your country. You killed for yourself. God’s never gonna make that go away. When you’re pushed, killing’s as easy as breathing.” – John Rambo

25. Sheriff William Teasle: “He was just another drifter who broke the law!”

Sheriff William Teasle: “Now don’t give me any of that crap Trautman. Do you think Rambo was the only guy who had a tough time in Vietnam? He killed a police officer for Christ’s sake!”

Colonel Samuel Trautman: “You’re goddamn lucky he didn’t kill all of you.”

26. Colonel Samuel Trautman: “I don’t think you understand. I didn’t come to rescue Rambo from you. I came here to rescue you from him.”

Sheriff William Teasle: “Well, we all appreciate your concern Colonel. I will try to be extra careful!”

Colonel Samuel Trautman: “I’m just amazed he allowed any of your posse to live.”

Sheriff William Teasle: “Is that right?”

Colonel Samuel Trautman: “Strictly speaking, he slipped up. You’re lucky to be breathing.”

Sheriff William Teasle: “That’s just great. Colonel, you came out here to find out why one of your machines blew a gasket!”

Colonel Samuel Trautman: “You don’t seem to want to accept the fact you’re dealing with an expert in guerrilla warfare, with a man who’s the best—with guns, with knives, with his bare hands. A man who’s been trained to ignore pain, ignore weather, to live off the land, to eat things that would make a billy goat puke. In Vietnam, his job was to dispose of enemy personnel. To kill! Period! Win by attrition. Well, Rambo was the best.”

More Rambo Quotes That Will Elevate Your Mind

Colonel Samuel Trautman: “I recruited him. I trained him. I commanded him for three years in Vietnam. I’d say that makes him mine.”

29. Colonel Samuel Trautman:” You don’t belong here. Why don’t you come back with me?”

John Rambo: “Back to what? My friends died here, and a piece of me did too.”

Colonel Samuel Trautman: “The war, the whole conflict may have been wrong, but damn it, don’t hate your country for it.”

Colonel Samuel Trautman: “Then what is it you want?”

John Rambo: “I want what they want, and every other guy who came over here and spilled his guts and gave everything he had, wants! For our country to love us as much as we love it! That’s what I want!”

Colonel Samuel Trautman: “How will you live, John?”

John Rambo: “You taught us to ignore pain, right?”

Do You Think You’ve Gained a Better Understanding of Our Soldiers’ Pain?

John Rambo is incredibly skilled, and as proof, he’s a decorated soldier. However, this didn’t stop him from becoming a prisoner of war when the Viet Cong captured him. He remained strong and determined to survive, but even the strongest man won’t be able to escape the dark past that lingered in his memories.

He might have seemed alright on the outside, but a little provocation was able to send him back to his life during the war. Rambo became consumed with grief, loss, and pain. However, he didn’t give up; Rambo persevered through all the pain—and fought through the demons in his mind.

Rambo’s battles didn’t end when the war ended. Instead, his enemies followed him home. To avoid something similar happening to us—albeit we’re not soldiers—we should strengthen our minds.

A strong mindset will allow you to move past whatever traumatic experience you encounter. These negativities are inescapable, after all. No matter where you go or what path you take, you’ll face them someday.

To ensure you conquer your battles, cultivate a strong mind. Never give up, keep pushing, and remain determined. If you take things day by day like Rambo, then we’re optimistic you’ll succeed!