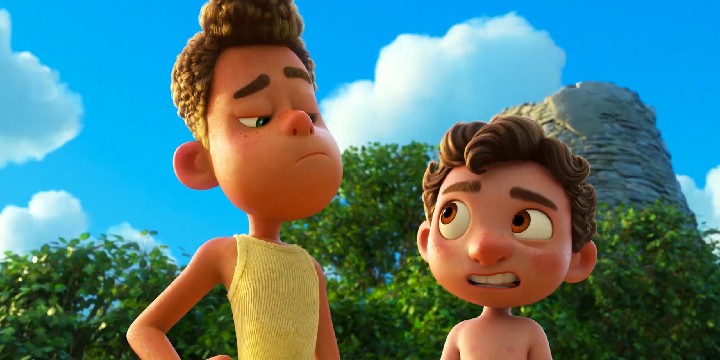 These top 30 Luca quotes will take you on an unforgettable summer adventure to the Italian Riviera!

Like most Disney movies, Luca incorporates a little bit of magic and mystery into its plot. It tells the story of how Luca, a young sea monster, gets a chance to explore the land as a human.

Through his adventures, he meets and becomes friends with humans, Alberto and Giulia. Together, they explore the town of Portorosso and experience once-in-a-lifetime things that Luca will never forget.

However peculiar their friendship is, it’s still built on mutual trust and understanding. That’s something we should all aim to have, especially as adults!

Read through this collection to get some more tips from Luca, Alberto, Giulia, and the rest of the gang!

And don’t forget to check out these Dory quotes and Shark Tale quotes.

1. “Every day we’ll ride someplace new. And every night we’ll sleep under the fish. No one to tell us what to do, just you and me out there. Free!” – Alberto Scorfano

2. “Some people, they’ll never accept him, but some will and he seems to know how to find the good ones.” – Grandma Paguro

3. “Walking is like swimming but without fins. Or a tail. And also there’s no water. Otherwise, it’s the exact same thing.” – Alberto Scorfano

4. “Because I’ve got news for you, he’s probably dead—or out there seeing the world.” – Luca Paguro

6. “It’s just the greatest thing that humans ever made, the Vespa!” – Alberto Scorfano

7. “Thank you, Giulia, for showing us the boring thing that takes us to this terrible place.” – Alberto Scorfano

Alberto Scorfano: “But you’re never without me. The next time that you jump off the cliff, or tell Bruno to quit bothering you, that’s me.”

Luca Paguro: “But how am I going to know you’re okay?”

Alberto Scorfano: “You got me off the island, Luca. I’m okay.”

10. Giulia Marcovaldo: “You know we underdogs have to look out for each other, right?”

Alberto Scorfano: “What’s ‘under the dogs?’”

Giulia Marcovaldo: “Underdogs. You know, kids who are different. Dressed weird, or a little sweatier than average.”

11. “Wow. Your life is so much cooler than mine. I never go anywhere. I only dream about it.” – Luca Paguro

12. “The world is a very dangerous place, Luca. And if I have to send you to the bottom of the ocean to keep you safe, so be it.” – Daniela Paguro

15. “There’s a million things you think you can’t do. All you need is a chance to try.” – Giulia Marcovaldo

Luca Quotes That You’ll Never Get Tired of Reading

16. “You just sit on it and it takes you wherever you want to go in the whole stinkin’ world.” – Alberto Scorfano

18. “All you gotta do is follow my lead, remember?” – Alberto Scorfano

26. “We’re not telling you our secrets. We are runaways.” – Alberto Scorfano

28. “Sure, there’s no sunlight, but there’s nothing to see anyway, or do. It’s just you and your thoughts, and all the whale carcass you can eat!” – Uncle Ugo

29. “I know who they are. They are Luca and Alberto, and they are the winners!” – Massimo Marcovaldo

30. “Mom, maybe his life is a little more important than your snacks.” – Daniela Paguro

How Would You Define the Kinds of Friendships You Have?

While Luca uses sea monsters and humans to show vast differences, in a way, it also uses them as a way to normalize people’s uniqueness. The people you encounter in your world will never be completely the same as you, and this is the main lesson we can gather from the movie.

However, the truth is, humans and sea monsters are just different species. Just because one species is not the same as yours doesn’t automatically mean it’s evil. Our differences are only things that make us unique; they shouldn’t drive us apart.

Despite everything, Luca, Alberto, and Giulia formed a strong bond and friendship. Yes, Luca was a sea monster, and Alberto and Giulia were humans. But, they found a common interest that brought them together as friends!

Keep in mind that true friendship needs trust and genuine understanding to form. It doesn’t matter how different you are from each other, as long as you have each other’s best interests at heart!