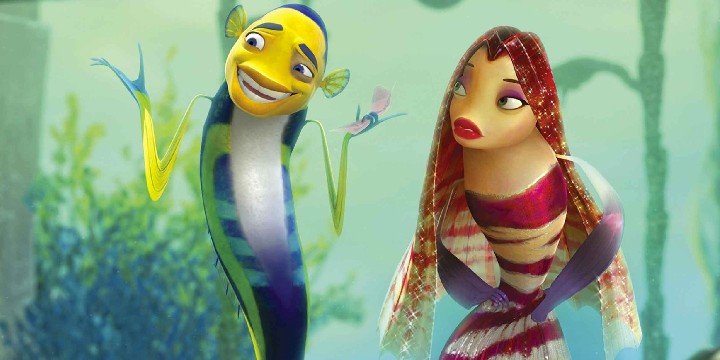 If you want a movie with enlightening messages and lessons for kids and adults, these Shark Tale quotes are for you!

Shark Tale is set in an underwater world and focuses on a fish named Oscar. He’s a Hawaiian cleaner wrasse who dreams of being at the top by becoming rich, famous, and influential.

Oscar is eager to achieve his dreams, so he looks for any possible way to get closer to his goals. So, when he witnesses a shark named Frankie killed by a dropped anchor, he takes advantage of it. He claims that he’s the one who killed Frankie, so he becomes a reigning star, and the entire city calls him the Sharkslayer.

He was elated and ecstatic with his new label. However, that happiness did not last as his lies pressured him. Dishonesty will never remain hidden, and Oscar dug his own grave while he tried to pursue his dreams!

Oscar soon realizes that wanting to achieve his ambition through immoral acts will lead to more severe consequences.

So, check out the list below to better understand how he resolved his conflicts and what happened at the end of the movie!

And make sure to read these Dory quotes and Luca quotes.

1. Angie: “Just tell me, Oscar, ’cause I’m curious. Why do you think she’s interested, huh? Do you think, for one minute, that she would even be with you if you weren’t the rich and famous shark slayer?”

Angie: “Are you that blind?”

Oscar: “At least she treats me like I’m somebody!”

Angie: “Yeah, well would she love you if you were nobody?”

Oscar: “Nobody loved me when I was nobody!”

Lenny: “What do you mean, that’s it? You’re the first fish I ever told. I’m tired of keeping it all a secret. And my dad, he’ll never accept me for who I am.”

3. “You know, Sharkslayer, there’s only one thing I like better than money—revenge!” – Lola

Angie: “No, forget it! Just go! Because I’m tired of hearing how everything you had in your life wasn’t good enough—including me.”

5. Oscar: “It was an anchor that killed Frankie. I didn’t have anything to do with it and neither did Lenny.”

Don Lino: “Well then if that was true, then why did you run away?”

Lenny: “Because you always wanted me to be like Frankie. I’ll never be the shark you want me to be.”

Oscar: “What is your problem? So your son likes kelp. So his best friend’s a fish. So he likes to dress like a dolphin, so what? Everybody loves him just the way he is. Why can’t you?”

7. Oscar: “All right, I totally betrayed you, but before we work this out I got a small thing to take care of.”

Oscar: “Sharks are coming to get me!”

Angie: “And they should! What did you expect? You just take credit for killing a shark and then everything would be fine and dandy for the rest of your life?!”

Oscar: “Uh, yeah. But don’t worry. Me and Lenny, we’re gonna take care of this.”

Oscar: “Hey, too late now, veggie boy. They’ll be looking for you, too!”

8. “How are my little babies this morning? You miss me? You doing good, huh? Huh? You see, Sykes, it’s a fish eat fish world—you either take or you get taken!” – Don Lino

9. Don Lino: “What do you mean you don’t understand? What’s there to understand? We’ve been over this 1,000 times. I don’t want to have to say it again. You know, you’re really giving me agita, you know that. I don’t know what else to say. Lenny, you see something, you kill it, you eat it. Period. Thanks. That’s what sharks do. That’s a fine tradition. What’s the matter with you? Your brother, Frankie, here, he’s a killer.”

Don Lino: “He’s beautiful. He does what he’s supposed to do. Wipe your face, but you, I’m hearing things. You gotta understand when you look weak, it makes me look weak.”

Shark Tale Quotes to Recall Great Scenes From the Movie

15. Don Lino: “Lenny. Lenny. Look at me. Look at me. This handing over the business is for both of us and you’re acting like you don’t even want it. I need to know you can handle that. Alright, alright. Right here in front of me now, eat this.”

Lenny: “Gee, thanks, Pop. Here’s the thing. I’m on a diet. And I read an article about these shrimps, they’re not good for you. I tell you. You know how many calories are in one of those shrimps? A lot.”

Shrimp: “It’s true. It’s true and the other thing is, my sister had a baby and I took it over because she passed away, and then the baby lost its legs, and its arms and he doesn’t put a stump, but I still take care of it with my wife and it’s growing and it’s fairly happy, but it’s difficult ’cause I’ve been working a second shift at the factory to put food on the table, but all the love and I see that little guy’s face makes worth it in the end. True story.”

Don Lino: “I’m not asking you anymore. I’m telling you. Eat it!”

Crazy Joe: “Now you live in a great penthouse, can I be your financial advisor?”

Crazy Joe: “You live in a billboard? And they call me crazy!”

19. “Your shark slaying days are over! And there ain’t nothing you can do about it.” – Don Lino

Shark Tale Quotes for a Day Full of Wisdom

21. “Sometimes I just be coughing for nothing!” – Oscar

Angie: “Dreams can start out small. You just gotta bet it all. Bet it all!”

24. “Hi, I’m Oscar. You might think you know me, but you have no idea! Welcome to my crib, the good life, the way the other half lives! Check it out, I got my 60-inch high-def plasma TV with six-speaker surround, CD, DVD, Playstation, and an eight-track for one of those days when you’re feeling just a little week, week, week old school hahaha! Because even a superstar Mac daddy fish like me has to have the basic necessities!” – Oscar

25. “What is with y’all living in a love boat? You’re supposed to be the MOB, get yourselves a decent hideout!” – Oscar

Did This Collection Help You Realize That Living a Lie Is Not Worth It?

It’s perfectly normal to plan how you’ll reach your goals. However, if you’re going to achieve it in the wrong way, like how Oscar spread lies, you should think about stopping.

Shark Tale shows how Oscar’s life is put in danger because of his dishonesty. Additionally, it’s not just him who suffered; it also affected the people who matter to him the most. Through these things, Oscar learns that no one can ever truly succeed if their success is built on lies.

Everyone should remember that success and improvements are only worthwhile if you know you worked hard to achieve them. It will be a challenging path, but at least it is the right one. After all, what matters is that you live honestly and do not harm others.

Sometimes, we feel compelled to do the wrong thing to achieve our goals quickly. But, learn to fight that thought; choosing the right path may take time. However, with determination and hard work, you’ll eventually get there.

So, don’t ever think you are getting behind on reaching your goal because we all have our timelines. Remember that success achieved through lies does not equate to happiness in the end.