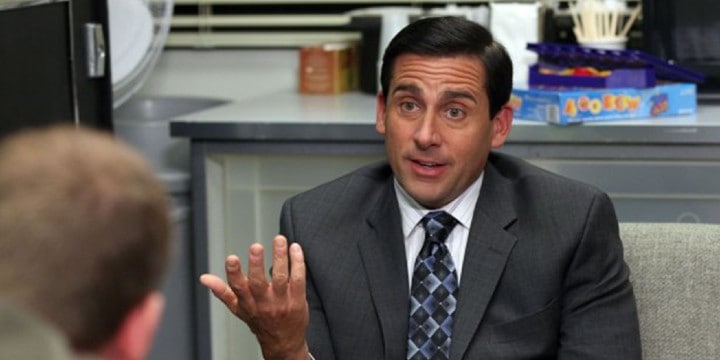 If you’re in need of a little bit of humor to get you going, then these Michael Scott quotes might just be perfect for you.

The U.S. version of The Office became a hit, not only because of its storyline and script, but also because of its amazing cast—and Michael Scott is at the center of it all.

His character was played with such complexity and sincerity that no one can deny the impact he had in our day-to-day lives.

And don’t miss out these Prison Mike quotes and The Office quotes.

5. “I feel like all my kids grew up and then they married each other. It’s every parent’s dream.”

6. “Guess what, I have flaws. What are they? Oh, I don’t know. I sing in the shower. Sometimes, I spend too much time volunteering. Occasionally, I’ll hit somebody with my car. So sue me.”

7. “Sometimes I’ll start a sentence, and I don’t even know where it’s going. I just hope I find it along the way.”

8. “If I had a gun with two bullets and I was in a room with Hitler, Bin Laden, and Toby, I would shoot Toby twice.”

9. “Would I rather be feared or loved? Easy. Both. I want people to be afraid of how much they love me.”

11. “Wikipedia is the best thing ever. Anyone in the world can write anything they want about any subject. So you know you are getting the best possible information.”

13. “They say, on your deathbed, you never wish you spent more time at the office—but I will.”

14. “No, I’m not going to tell them about the downsizing. If a patient has cancer, you don’t tell them.”

17 “The most sacred thing I do is care and provide for my workers, my family. I give them money. I give them food. Not directly, but through the money.”

20. “I know it’s illegal in Pennsylvania, but it’s for charity, and I consider myself a great philanderer.”

21. “Now, you may look around and see two groups here. White-collar, blue-collar. But I don’t see it that way. And you know why not? Because I am collar-blind.”

22. “And I’m optimistic because every day I get a little more desperate.”

23. “The worst thing about prison was the dementors.”

24. “Society teaches us that having feelings and crying is bad and wrong. Well, that’s baloney, because grief isn’t wrong. There’s such a thing as good grief. Just ask Charlie Brown.”

25. “There is no greater feeling than when two people who are perfect for each other overcome all obstacles and find true love.”

26. “Any man who says he totally understands women is a fool. Because they are un-understandable.”

27. “I would not miss it for the world. But if something else came up, I would definitely not go.”

28. “It takes you thirty seconds to brush your teeth? Wow, that’s ten times as long as it takes me.”

29. “I guess the attitude that I’ve tried to create here is that I’m a friend first, and a boss second, and probably an entertainer third.”

30. “Reverse psychology is an awesome tool. I don’t know if you guys know about it, but basically, you make someone think the opposite of what you believe. And that tricks them into doing something stupid. Works like a charm.”

32. “You cheated on me? When I specifically asked you not to?”

35. “People will never be replaced by machines. In the end, life and business are about human connections. Computers are about trying to murder you in a lake. And to me, the choice is easy.”

36. “I live by one rule—no office romances, no way. Very messy, inappropriate, no. But, I live by another rule—just do it, Nike.”

40. “Two queens at casino night. I am gonna drop a deuce on everybody.”

41. “Presents are the best way to show how much you care. It’s a tangible thing you can point at and say, ‘Hey man, I love you. This many dollars worth.’”

42. “When the son of the deposed king of Nigeria emails you directly, asking for help, you help! His father ran the freaking country! Okay?”

44. “They say that your wedding day goes by in such a flash that you’re lucky if you even get a piece of your own cake. I say that’s crazy. I say let them eat cake. Margaret Thatcher said that about marriage. Smart broad.”

48. “I’ve always wanted to be in the witness protection program. Fresh start. No debts, no baggage. Already got my name picked out—Lord Rupert Everton. I am a shipping merchant who raises fancy dogs. That’s the life.”

50. “You know what else would’ve been nice? Winning the lottery.”

52. “I was never in this for the money, but it turns out that the money was an absolute necessity for me. I tried to live the dream. I tried to have a job, a girlfriend, another job, and I failed. But the good thing about the American Dream is that you can just go to sleep, and try it all again the next night.”

55. “I know, but I mean, it’s so competitive here. What’s the dollar worth in your land? Medical school must’ve cost, like, 40 bucks or a donkey or something.”

57. “Yeah, tell me about it. You know, Jan has my credit cards and she’s using ’em as if I’m made of money. She thinks I’m a human ATM machine.”

58. “In this dream, I did both of these jobs beautifully. And I loved it. And everybody loved me. The truth is, I can’t do this.”

59. “Yeah. I was thinking about doing some gambling myself. You know, just a little bit of money. Maybe doubling it and then doubling it, several more times.”

60. “I don’t talk to my girlfriend about money. It’s rude and unsexual.”

61. “I Used to have two cars. Traded them in. Now we’re down to one. Good economic sense. Although the new car’s a Porsche. For her.”

62. “I’ve never done this before. I’ve never quit anything in my life, so you are filming history.”

63. “Look, I’ll tell her that it’s bad. It could’ve been a lot worse, but due to some fancy financial footwork I was able to cut it in half.”

65. “Here it is. The heart of New York City, Times Square—named for the good times you have when you’re in it.”

66. “I enjoy having breakfast in bed. I like waking up to the smell of bacon, sue me. And since I don’t have a butler, I do it myself. So, most nights before I go to bed, I will lay six strips of bacon out on my George Foreman Grill. Then I go to sleep. When I wake up, I plug in the grill, I go back to sleep again. Then I wake up to the smell of crackling bacon.”

69. “It just seems awfully mean. But sometimes, the ends justify the means.”

73. “I had a great summer. I got a West Nile virus, lost a ton of weight. Then I went back to the lake. And I stepped on a piece of glass in the parking lot, which hurt. That got infected. Even though I peed on it.”

74. “Right here is my favorite New York pizza joint, and I’m going to go get me a New York slice.”

75. “Sometimes you have to take a break from being the kind of boss that’s always trying to teach people things. Sometimes, you just have to be the boss of dancing.”

76. “I guess I’ve been working so hard, I forgot what it’s like to be hardly working.”

78. “Jan is cold. If she was sitting across from you on a train and she wasn’t moving, you might think she was dead.”

80. “What am I doing? I’m blowing dodge. I’m getting out of town. Whatever you call it. I’m running away from my responsibilities. And it feels good.”

81. “The people that you work with are, when you get down to it, your very best friends.”

84. “Well, happy birthday, Jesus. Sorry that your party’s so lame.”

88. “When I discovered YouTube, I didn’t work for five days.”

89. “If we come across somebody with no arms or legs, do we bother resuscitating them? I mean, what quality of life do we have there?”

90. “I don’t understand. We have a day honoring Martin Luther King, but he didn’t even work here.”

93. “There’s no such thing as an appropriate joke. That’s why it’s called a joke.”

94. “I would say I kind of have an unfair advantage because I watch reality dating shows like a hawk, and I learn. I absorb information from the strategies of the winners and the losers. Actually, I probably learned more from the losers.”

95. “There were these huge bins of clothes and everybody was rifling through them like crazy. And I grabbed one and it fit! So, I don’t think that this is totally just a woman’s suit. At the very least it’s bisexual.”

96. “I don’t come up with this stuff, I just forward it along. You wouldn’t arrest the guy who was just passing drugs from one guy to another.”

97. “Webster’s Dictionary defines ‘wedding’ as the fusing of two metals with a hot torch.”

100. “It is St. Patrick’s Day. It is the closest that the Irish will ever get to Christmas.”

101. “Abraham Lincoln once said that, ‘If you’re a racist, I will attack you with the North.’ And those are the principles that I carry with me in the workplace.”

102. “I learned a while back that if I do not text 911, people do not return my calls. Um, but people always return my calls because they think that something horrible has happened.”

103. “Granted, maybe this was not the best idea, but at least we care enough about our employees that we are willing to fight for them.”

104. “Should have burned this place down when I had the chance.”

105. “It takes an advanced sense of humor. I don’t expect everybody to understand.”

106. “I am Michael, and I am part English, Irish, German, and Scottish—sort of a virtual United Nations.”

108. “You will not die! Stanley! Stanley! Barack is President! You are black, Stanley!”

109. “I want today to be a beautiful memory that the staff and I share after I have passed on to New York. And if Toby is a part of it, then it’ll suck.”

110. “That was offensive and lame, so double offensive. This is an environment of welcoming, and you should just get the hell out of here.”

Did These Michael Scott Quotes Brighten Up Your Day?

Sometimes, we just need that little pop of color—that little bit of humor—to get us going. Life may be tough, but there are little pieces of entertainment, like The Office, that can cheer us up. Aside from bringing a little bit of positivity into our lives, we also learn a lot through Michael Scott’s character—like making the most out of any situation, taking chances, and most importantly, laughing about life. After all, laughter is still the best medicine.

Were these quotes able to cheer you up? Would you like to see a collection of quotes from the other characters of The Office? Let us know in the comments below.