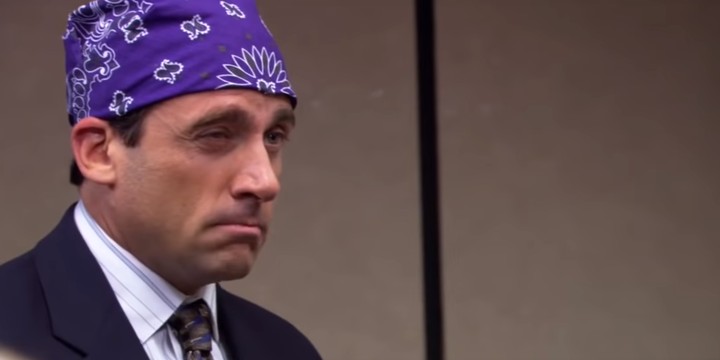 We’ve compiled a list of 60 Prison Mike quotes about the most controversial events in a convict’s life.

Steve Carell appeared as Prison Mike in the ninth episode of the American comedy television series, The Office.

Here, under the identity of Prison Mike, he attempts to make them believe that prison is way worse than they think it is.

Are you curious about what went on? Read the full collection to find out more!

And make sure to check out these Michael Scott quotes and The Office quotes.

2. “I stole, and I robbed, and I kidnapped the President’s son, and held him for ransom.”

3. “Look, prison stinks, is what I’m saying. It’s not like you can go home, and recharge your batteries, and come back in the morning, and be with your friends having fun in the office.”

4. “Close your eyes. Picture a convict. What’s he wearing? Nothing special—baseball cap on backward, baggy pants. He says something ordinary like, ‘Yo, that’s shizzle.’ Okay, now slowly open your eyes again. Who are you picturing? A black man? Wrong. That was a white woman. Surprised? Well, shame on you.”

5. “Well, there’s somebody I’d like you to meet, somebody else who has been to prison.”

6. “The worst thing about prison was the—was the Dementors. They were flying all over the place, and they were scary, and then they’d come down, and they’d suck the soul out of your body and it hurt!”

7. “Do you really expect me to not push you up against the wall, biatch?”

9. “No, not, ‘Harry Potter.’ There are no movies in prison. This is my point! You guys got it soft and cushy! This place is freaking awesome! The people are awesome! Your boss is nice! Everyone seems to get along! People are tolerant! People who have jumped to conclusions can redeem themselves! Nobody is nobody’s bitch. I hope that this scared you. And from me, Prison Mike, to you, I just wanna thank you for listening to me—letting me be a part of your life today. ‘Cause you got a good life! A good life. So, what do you think? It doesn’t sound so great, does it?”

11. “Okay! Listen up, everybody! Um, you guys said that prison was better than this place, and I heard ya, loud and clear, so, I am instituting some changes to make this more like prison.”

14. “Hey, look at me, I’m a baby! I’m one of those babies from ‘Look Who’s Talking.’ What am I thinking? Look at all those staplers! What’s a stapler? I don’t even know, I’m a baby! Hey, Mom, I’m thirsty! I’m thirsty, Mama! I want some milk. And you know where milk comes from! Breasts.”

15. “Why did the convict have to be a black guy? It is such a stereotype. I just wish that Josh had made a more progressive choice. Like a white guy, who went to prison for polluting a black guy’s lake.”

Famous Prison Mike Quotes to Help You Remember the Segment

16. “All right, hey, hey, hey, hey. That’s just the way we talk in the clink. Been a lot of fun talk about prison today, but I am here to scare you straight.”

18. “Gruel sandwiches. Gruel omelettes. Nothing but gruel. Plus, you can eat your own hair.”

20. “So, what we need to do is to forget about this whole Martin in prison thing. People will draw unfair conclusions about Martin, and, or black people.”

21. “In our society, a black man can be arrested for almost anything. He was probably at a sporting event, and saw some people pushing each other, and he intervened.”

22. “Ah. Good, good. Good. Just a second. Everybody? May I have your attention please? I realize that a lot of you have already heard that Martin here has had some trouble with the law, but I just want to declare publicly that I trust him, completely, and that anybody who doesn’t is an ignorant, dumb person.”

23. “These people don’t realize how lucky they are. This office is the American dream. And they would rather be in the hole.”

24. “Martin went from being a new guy from Stamford, to the convict, to my friend, back to a convict, then to kind of a nuisance actually, if we can be completely honest. And finally to a quitter. And I will not miss him. And that is not because he is black.”

25. “Okay nutcases, get out of there! Good work. Long day. Really long. Why don’t you guys head home early? Time off for good behavior! Heh. Good job. Enjoy your freedoms!”

26. “No! If you think prison is so wonderful, then, enjoy prison! They are such babies. I am going to leave them in there, until they can appreciate what it’s like to have freedom. And if this doesn’t bother them, then I am out of ideas.”

28. “All right everybody, there has been a lot of name calling against our office today. Corporate maligning, slurring, much of it coming from one of you, who claims that prison is better than here. And none of you can say, ‘Boo,’ because none of us have ever been to prison.”

29. “They were very disrespectful to me, and to the office. And Martin has had a bad influence, to think that I gave him the benefit of the doubt.”

Prison Mike Quotes That Will Pique Your Interest

31. “Yeah, it’s freaking cold out here. Anybody wants to stay out, you’ve got about 27 minutes of rec time.”

36. “You show me a white man you trust and I will show you a black man that I trust even more.”

42. “Hey Jan, speaking of Stamford, Hannah brought in her baby.”

Martin: “Good. Getting settled, you know?”

51. Angela: “Sure. Let’s protect the convicts. At the expense of the general feeling of safety in the workplace. As a 90-pound female that sits in an ill-lit, rarely visited corner of the office, naturally, I agree with that.”

54. Martin: “Um, I really don’t mind. It was a stupid mistake. I was working in finance, and I got involved in some insider trading. So, I spent a little time in the clink.”

Prison Mike: “That is awesome.”

Prison Mike: “Um, Martin, from Stamford, was, at one time, in prison. No. Dwight! Be cool! Be cool!”

60. Pam: “Kinda sounds like a prison is better than Dunder-Mifflin.”

Which of These Prison Mike Quotes Do You Agree With?

Every prisoner has a unique story to tell. After all, they have to survive in an uncomfortable environment surrounded by different prisoners.

The sad reality is that they can’t do anything to overcome their loneliness, especially when they miss their loved ones. Through this, some inmates even learn how to change their ways during their time in prison.

Yes, they made mistakes, but they are still human beings who need second chances. Because of this, we should not associate them with negative or other derogatory terms.

What have you learned in our collection? Have you watched this episode before? We would be happy to see your comment below!